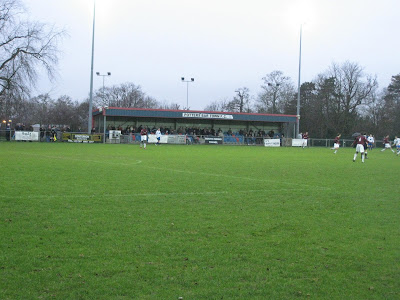 The Town erased all memory of last weekend's home league defeat to VCD with a brilliant and stylish performance in beating local rivals Potters Bar Town at the South Mimms Travel Stadium.

The starting line up was changed with Darren Bonfield replacing Robert Blackburne in between the sticks and Nick Turner replacing Mark Kirby in the centre of defence. Michael Bardle also moved to a left back role with Sam Byfield coming in to play on the left wing.

Town started the game brightly with Adam Wallace and Liam Hope linking together well up front and the busy looking Ben Hammond on the right wing performing to his usual high standard.

It was these three players that linked up to score Town's first goal when Hope held the ball up to square across to Hammond on the right wing who passed to Wallace whose magnificent shot went past Matt Bennett the home keeper into the top left hand corner of the net.

It was 2-0 shortly after when a Rudi Hall free kick from the left hand outside of the box was met by Wallace to head home past Bennett.

The Scholar's looked shell shocked with centre back James Hammond appearing to be arguing with his keeper Bennett about a lack of communication and centre forward Terry Smith being booked for a late looking clumsy tackle.

Town made it 3-0 when Liam Hope scored his 7th goal in 9 games firing home from Ben Hammond's cross on the right hand side to the delight of the noisy Town fans who had gathered on the Potters Bar Kop. 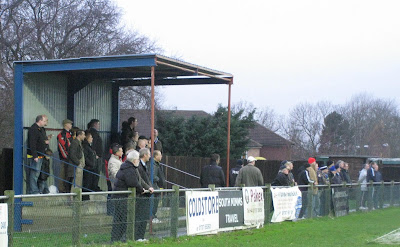 TOWN FANS ARE ALL SMILES ON THE POTTERS BAR KOP

The Scholar's looked frustrated and demoralised at being outclassed by the better team and seemed to loose their discipline resulting in Joe O'Brien being booked for a late looking tackle on Richard Morton and Ola Williams lucky to get away with a talking too after another late challenge.

Half time came and it was all smiles being 0-3 to Town who had played supremely well with Wallace's first goal and Hope's finish being from the top drawer. Town's skillful play had reduced Adam Lee's team who had been on a good run of form to thumping long balls up field and clogging our player's with late challenges.

Adam Lee replaced centre back Hammond with Lewis Payne and Luke Croll with Doyle at half time in a Barry Fryesque double substitution but this didn't change the home side's luck as Town continued to attack as it started to rain on us watching on. Payne probably knew it wasn't his day (and he'd only been on the pitch for 10 minutes) when he shinned a ball up in the air which went back to his keeper who picked it up with the referee blowing up for a back pass decision that shouldn't really of been given. Rudi's free kick was blazed over from the free kick given.

Liam Hope then produced a sublime piece of skill when he lobbed the ball over Bennett from just inside the right hand side of the box only for the ball to graze the top of the cross-bar. This would of been one of the goals of the season had it gone in.

Richard Morton was also playing well in the centre of midfield and had a few chances to score with a header of the bar from a Rudi corner standing out.

It was 4-0 when Wallace got the ball just inside the centre of the penalty box and skillfully stepped over the ball resulting in the unlucky Ola Williams putting the ball into his own net.

The game petered out towards the end with Potters Bar getting a penalty late on for what looked like a shoulder to shoulder challenge. Ellis Remy scored the kick shooting straight down the middle to make it 1-4.

Andy Jones made a late substitute appearance for Wallace and the talk was of will hee get a golden booking in the remaining 2 or 3 minutes!!

Adam Wallace with his two goals and his 100% effort in tracking back and holding the ball up was the cold end's Man of the Match.

What was satisfying was Town made Potters Bar, who are a good team, look decidedly average. I'm sure The Scholar's will finish nearer the top than the bottom of the league.
Was it the home side having an off-day today or the Town playing fantastically?
The cold end opts for the later option.

RESULT OF THE DAY IN THE RYMAN NORTH goes to Romford and their 3-2 home victory versus East Thurrock United. With GWR loosing at home to Ware and Lowestoft Town winning at Northwood they have moved to the summit of the table. The cold end thinks the Trawler Boys won't move from this position from now until the end of the season and they are Champions elect!! The good news is Town are 4th in the league!!