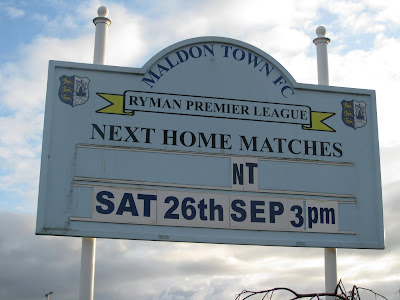 *Maldon's fixture board outside their ground looked like it needed updating 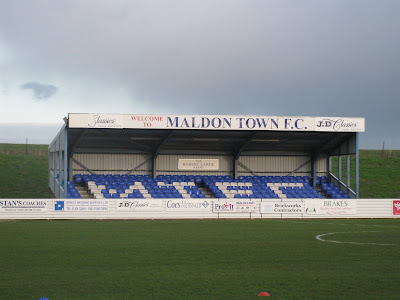 Town brushed aside Maldon Town in a confident and upbeat display of stylish attacking football to go fourth in the Ryman League Division One (North) table today.

On a very chilly day in East Essex the start to the game couldn't of been any better when a Sam Byfield cross went through a crowd of players in the box to Ben Hammond just inside the penalty box to shoot home past Darren Smith in the home goal to make it 1-0 to the Town. The first thing the Maldon stopper had to do in the game was pick the ball out of his own net after only 20 seconds of play. 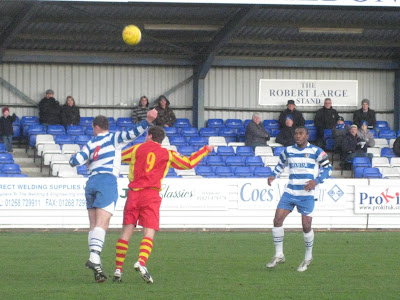 Maldon looked a big physical side when they came out of the tunnel and most of their play went through impressive Captain Stan Murvo in the centre of midfield; The home side nearly got back into the game when a shot on target was expertly saved at point blank range by the returning Rob Blackburne in the Town goal.

Town were tremendous going forward with Hammond and Byfield on the wings and the Hope/Wallace front pairing causing many problems for the Maldon back four. Wallace is a different player to the one which started the season for Town, He put in 100% effort today holding the ball up brilliantly and running his socks off tracking back very impressively on numerous occasions. 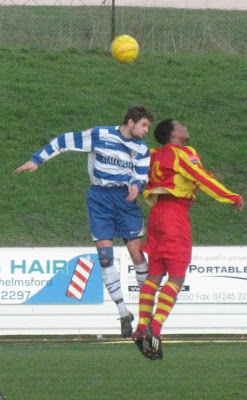 Town made it 2-0 when Byfield put another great cross over from the left to Wallace at the far post whose header found Bardle whose header went over Smith into the net via a nick of the crossbar. Bardle had started this move off with a pass to Byfield and then ran forward into the box. 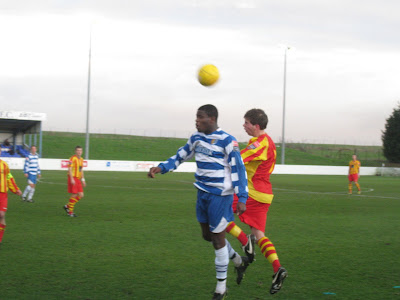 Maldon came back at Enfield and had another good chance to get back into the game but found Rob Blackburne in inspirational form who tipped a great shot around the left hand post.
"you can't stop me scoring....you just can't stop me scoring!!!"
Paul Marks then capped off a fine first half performance for Town making it 3-0 when Wallace holding the ball up put a through ball to Hammond on the right hand side of midfield whose cross was headed in by Marksy who ran off towards the Town fans gathered on the side of the pitch shouting confidently 'you can't stop me scoring...you just can't stop me scoring' which made most of the team and fans chuckle. Long may this continue for a player who has been a goalscoring revelation from midfield this season...six goals in sixteen league games. 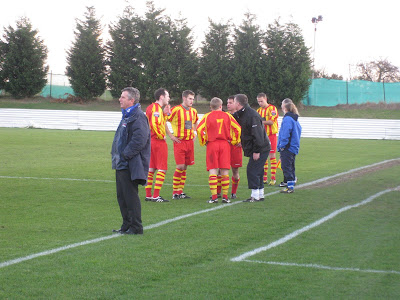 *Steve Newing gives his midfield players instructions from the communal technical area whilst Maldon Manger Colin Wallington watches on
It was always alot to expect the second half to live up to the first and it was Maldon who controlled the first twenty minutes of the second period without ever troubling the Town back four. Town appeared to sit back happy in the knowledge the 3 points were in the bag already. 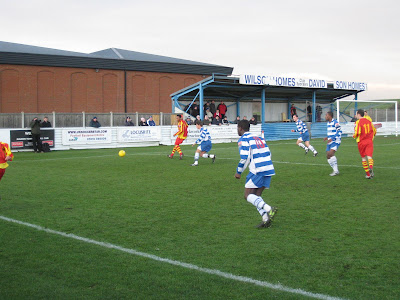 It was 4-0 when a high looping cross from a now very confident Byfield on the left was headed in at the back post by Wallace. Maldon continued to play some nice football backed by their goalkeeper Smith who continued to loudly shout instructions and advice to his team-mates despite being down by four goals. You have to admire his enthusiasm for the game and he was given a deserved rousing round of applause by the Town faithful behind his goal at the end of the match. "KINGY HOOK IT" was his favourite shout every time centre back Paul King got the ball at his feet. Maldon did have one good chance when a shot on target was well saved by a the flying dive of Blackburne.

Liam Hope who deserved a goal for his efforts had a good shot on target well saved by Mr Loud and was then unlucky when his "goal" was ruled offside after some great play by Paul Marks. Hope's luck will change and is due a goal on Tuesday night.

A superb team performance from Town which was very enjoyable to watch. The cold end's man of the match goes to Sam Byfield on the left wing who made three of the goals in his best game for Town so far. Ben Hammond with his industry, effort and enthusiasm as always also stood out as did Adam Wallace up front. Rob Blackburne returning in goal deserved his clean sheet with the three great saves he made. 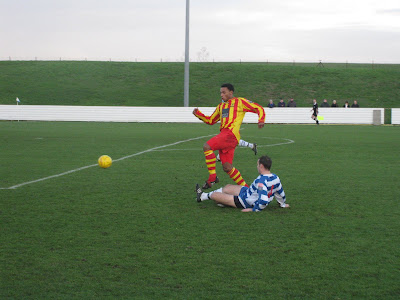 Special mention has to go to referee Mr Margetts who had a great game. I can't remember him booking anyone during the game. There were one or two clumsy late challenges that other over-zealous referees would of shown the yellow card for. Instead Mr Margetts waited and had a quiet word with the player which seemed to do the trick. Well done to him and his two assistants for letting a tremendous game flow perfectly. 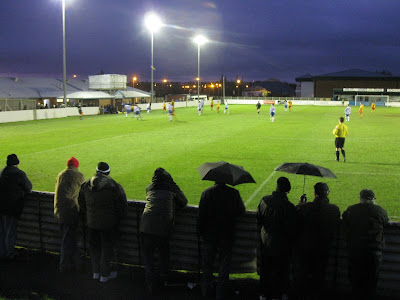 *Town supporters shelter from the rain in the second half - The glory of the Ryman League!!!