Despite large spells of pressure Town failed to give VCD custodian James Tedder any decent shots on target to save. It was a very scrappy forgettable game played out at a very cold Goldsdown Road.

VCD defended in numbers and it was agreed by most supporters at the cold end where Town were attacking in the first half that if we could get an early goal the game could be there for the taking.

Richard Morton who was the only change in the side from Tuesday night (in for suspended Paul Marks) had the first chance of the game from a Rudi Hall corner his fierce shot rose up and over the bar. It was then we heard it.......The Whinging fan's first confirmed whinge timed at 18 minutes....."come on midfield...do something!!!!" THEY JUST HAD!! 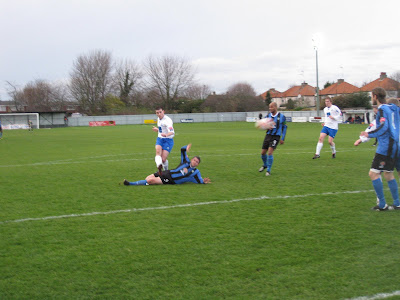 VCD's left sided winger Nick Hegley looked very good at times and was a thorn in Enfield's defence on more than one occasion. It was a long ball up to Hegley on the left which got VCD's first goal on 21 minutes. He found himself in lots of space and put over a great cross for Captain Leroy Huggins to rise unchallenged at the far post to head into the net. 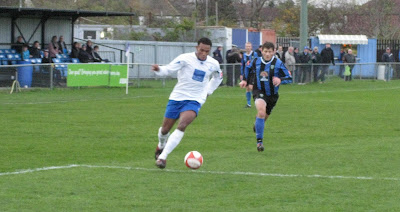 Town's defence seemed to go to sleep for a while as Hegley found himself in space again to put over another good cross into the danger zone which luckily none of his team mates got on the end of.

The only other talking point of the first half was VCD'S penalty shout, Danny Penny was tackled in the box in what looking at it from a neutral point of view was a late challenge and didn't win the ball. Referee Alex Saily didn't think so though much to the disgust of the VCD team. To rub salt into Penny's wounds he was taken off the pitch injured after being booked for dissent as he must of said something to Saily. As stated looking at it from a neutral view it did look like a penalty and if it would of happened up our end Town would of been aggrieved as well. Managers and coaches always say "these things level themselves up over the course of the season" so this may have been Paul Marks penalty shout from Tuesday being balanced out.

Adam Wallace worked hard up front holding the ball up well but Town didn't have any real chances in front of goal.

All the discussion at half time was that Town needed an early goal in the second half to make VCD change their game plan and hopefully allow Town to score the goal's needed for victory. 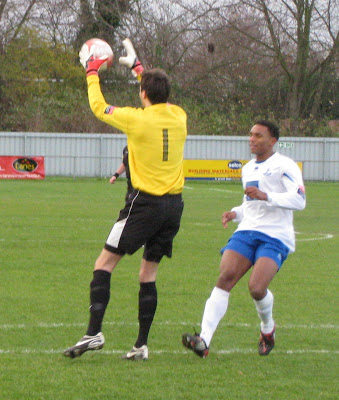 Town came out and put the pressure on with a Ben Hammond cross into the box being met by a lovely diving header from Rudi Hall.. This summed up the day as the effort was unluckily off target, anywhere on target and it would of been a certain goal. 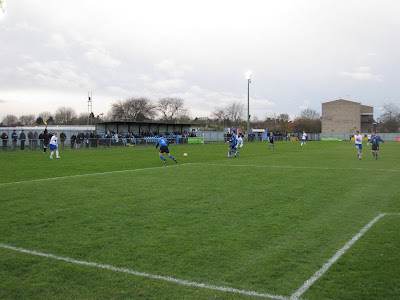 Liam Hope did come up with the goal Town needed heading home after 57 minutes which left at least half an hour for the team to go on and win the game.

VCD had other plans though and it was a high looping ball from David Hunt on the right hand side into the box which was met by the unchallenged Meshach Nugent whose header was saved brilliantly by Rob Blackburne. Unfortunately the powerful header could only be palmed across the goal and Nugent followed up by putting the ball in the net, Rob can't be blamed for the goal. He was injured trying to save the follow up. A great header and some bad luck for Rob.

Town threw on Stuart Blackburne, Sam Byfield and Andy Jones in the closing stages of the match and despite loads of pressure didn't create any clear cut chances with VCD holding out for the victory.

VCD had the best two chances of the game which they took so you have to say they probably deserved the victory on the balance of what little exciting play there was.

Steve and Del will want to put this performance down as just one of those days and move onto the glory of Wingate and Finchley away in the League cup on Tuesday.

VCD
Tedder, Hunt, Barton, Ward, Cook, Hogg, Winchcombe, Penny, Huggins, Nugent, Hegley.
Subs - Ibemere, Duckworth, Maskell, Bradshaw, Hamilton.
They did bring on a few of their subs but I was so cold didn't note them down. 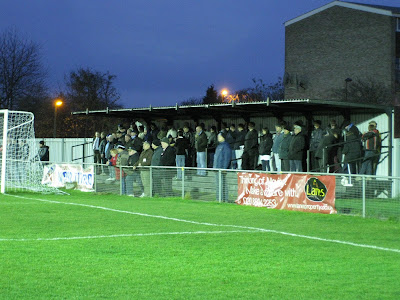 Enfield Town fans behind the goal in the second half. 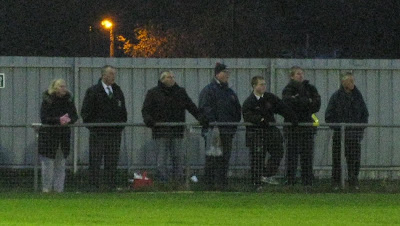 VCD's travelling band of fans went home the happier though!!
at 07:41