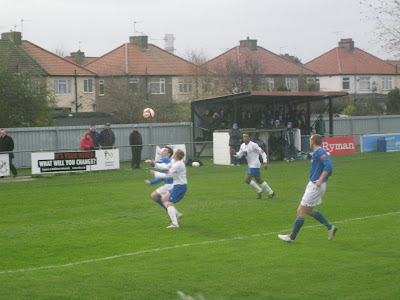 Lowestoft Town made the long trip down from the Suffolk Coast to Golsdown Road yesterday and should of been beaten by Enfield Town who put in their best performance of the season so far. The game was played in blustery conditions with the wind mainly blowing across from the bar side of the ground but on occasions big gusts blew in all directions. Coupled with the intermittent heavy rain in the first half it was not the best playing conditions for football but the match turned out to be gripping at points especially during the second period.

The Trawler Boys had a very strong team including midfielder Gary Holt. The ex Kilmarnock, Norwich City, Nottingham Forest, Wycombe Wandereres and Colchester United player has also been capped ten times by the Scotland. Ex Peterborough United and Norwich City player Adam Smith also impressed at left-back and Matt Nolan up front looked a very useful player, More about him later. Jamie Godbold who is a Lowestoft legend having played 400+ times for his home town club looked a sound player in the midfield for the away side too.

After about ten minutes Town's new signing Michael Bardle playing on the left wing had a shot which rose over the bar from the edge of box not troubling keeper Andy Reynold but after this Lowestoft controlled large parts of the first half with both teams struggling in the conditions.

Scott Mitchell made it 1-0 when he hit a shot from the left hand side edge of the box which flew past the diving Rob Blackburne and nestled into the right hand corner to large celebrations from the travelling support which numbered about 70 hardy souls. Mitchell then got the better of Dave Blower at right back and would of wanted to do better with his resulting shot which went wide of the mark.

Rudi Hall playing in the centre of the park was having a great game for Enfield, his work-rate was second to none putting in a number of impressive blocks and tackles, his battle with his opposing number Dale Cockerill was interesting to watch.

The Town centre back pairing of Matt Kirby and Ross Edwards was then split up as Edwards was replaced by Craig McKay as it looked like he had taken a knock.

Town then equalised much against the run of play when some great play by Bardle on the left hand side of the box got him in front of right back Neil Plaskett for him to swing a brilliant cross into the box. Reynolds seemed to be in two minds as the ball came over towards him, He went to catch it but then decided to punch it out towards the edge of the box. The ball fell to Paul Marks on the edge of the box who with upmost composure volleyed the ball back past Reynolds into the back of the net. A fantastic finish!!!

The Second half was excellent and the Town players were first-class putting in first-rate performances all over the field of play.

Lowestoft had a good chance when a free kick was tipped excellently onto the post by Blackburne, in the resulting scramble the ball was cleared off the line by Dave Bastian who jumped and celebrated like he had scored himself.

The game changed when Liam Hope who had been very quiet came off to be replaced by a returning Stuart Blackburne. Stuart looked at home instantly linking up with Gunz in their familiar partnership up front.

It was then the ball was lofted forward by Blackburne in goal down the centre of the pitch to Wallace who knocked the ball on for the speedy Blackburne to score past the diving Reynolds in the right hand corner of the goal. An exceptional finish to make it 2-1.

Paul Marks was then rather harshly sent off for a normal looking 50/50 shoulder to shoulder challenge against Matt Nolan. Referee Richard Jaye who had been brilliant up to this point as no supporter had noticed him showed the red card immediately. Maybe the referee had seen something we hadn't. Nolan went down onto the floor injured but almost immediately he was up and playing following the incident.

The ten men played heroically and looked to kill the game off being much the better team with Stuart causing the Lowestoft back four all sorts of problems with his pace. He ran onto a ball in the left hand corner and beat Neil Plaskett. Stuart then ran across the goal with Reynolds looking beaten but seemed to take one more touch than he should of and wasn't able to get a shot on target.

Stuart then rounded keeper Reynolds and shot towards goal. I have to admit along with most Town fans present I was jumping celebrating as the ball went towards the net, Neil Plaskett unfortunately slid in and cleared the ball off the line at the final moment. Any later and the ball would of been in the net.

It was cruel blow to the Enfield team who had played brilliantly in the 2nd half taking the game to Lowestoft with ten men when Scott Mitchell scored an equaliser right at the death. This showed what a good team they really are or should it be lucky....Probably a bit of both???

Now I've had a chance to calm down from the disappointment of the last minute equaliser I can say on reflection it was a great game which Lowestoft controlled in the first half and Enfield in the second so a 2-2 draw was probably a fair result in the end.

Matt Kirby played a stormer in the centre of defence for Town, Rudi Hall also had a great game in midfield and when Stuart came on it changed the game in the favour of Town. Ben Hammond on the right of midfield pushing up and Michael Bardle on the left doing the same seemed to give the side more shape and width. The midfield four of Hall/Morton/Marks (two of three) with the two new signings out wide look good and with Blackburne/Wallace or Hope (who with his record at previous clubs will score goals) look a positive attacking force for the games to come.

The cold end thinks the league title is going to be won by either East Thurrock United or Lowestoft Town so drawing 2-2 against the trawler boys is a great result after we were soundly beaten by East Thurrock a few weeks back. What is pleasing is we scored twice against a team who had previously only conceded four goals in the league.

A point of note for the travelling fans who chanted 'your just a bus stop in Tottenham' is Enfield is nowhere near Spurs.. It would be same as visiting supporters singing 'your just a train station near Yarmouth' at Crown Meadow. Full marks to the Trawler Boy fans though and it was nice to see some visiting fans making some noise for once. Well done for making the long journey down from Suffolk! Your a credit to your club. See you all in February for a day at the seaside.