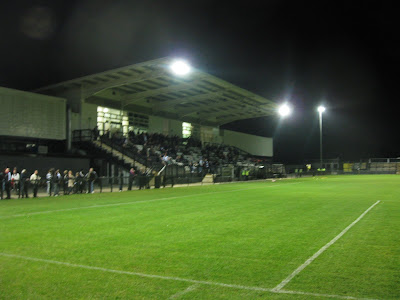 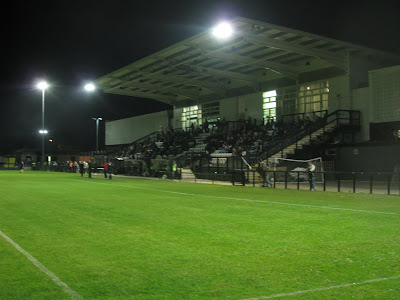 ***TWO VIEWS OF THE IMPRESSIVE MAIN STAND AT IMPERIAL FIELDS***

The cold end ventured South of the river last night with what seemed a very long trip to the bottom of the Northern Line to Tooting and Mitcham's newish Imperial Fields stadium to see them take on Harrow Borough. 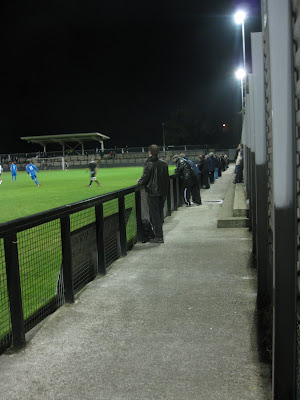 The stadium is of a very high standard for this level of football with two sets of terracing running the whole length behind both goals, a large main stand and the side opposite being just two steps of terracing with what looks like space to expand if necessary. The ground and club seem destined for a higher level of football but for a side riding high in the premier division the crowd was only 245 with the travelling band of Boro fans numbering about 20-25. £10 entrance fee for a Ryman Premier Match seemed a bit steep although the cold end hasn't seen a Premier game for a few season's so is not aware of the going rate for entrance fee's across the league. 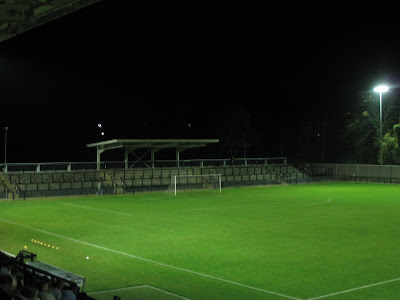 As you'd expect from a team managed by Dave Howell Harrow were well drilled defensively and played much the better football in the opening 20 minutes drawing a good save from the home keeper. Tooting came back into the match and gradually got on top with Paul Vines looking very impressive up front. It has to be said this Premier Division game was played at a much higher pace than the Town games the cold end has seen this season. Tooting scored the only goal of the game in injury time in the first half when Vines finished a well crafted move. 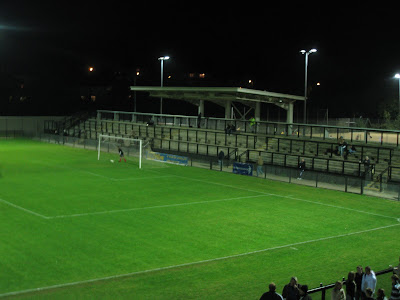 Tooting's supporters behind the goal tried to get an atmosphere going with one shout of 'Tooting' being followed up by someone else shouting 'Mitcham' and back again with a few shouts of 'C'mon Tooting' but that was it. This win puts them 2nd in the league albeit behind Dartford who look like champions elect so the crowd does look disappointing. The cold end likes to think if Enfield Town ever (or when???) get to the higher reaches of the Premier we could be potentially pulling in crowds of 400-500 or maybe higher. going back to the glory glory days of Southbury Road. 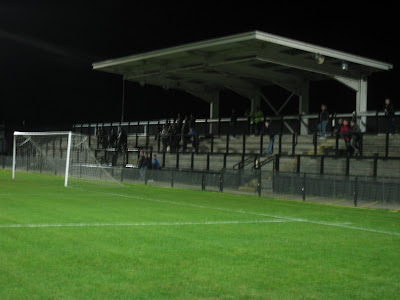 Tooting were on top for the whole of the 2nd half especially after Boro were reduced to 10 men following a challenge on Dean Hamlin by James Fraser right in front of the main stand and dug-outs. Hamlin was stretchered off and Fraser red carded. The home side couldn't convert their superiority into goals though hitting the post once and the game ended 1-0. Tooting look a good side and thinking my head (not my heart) they would probably beat Town if we played them. Harrow as stated were well drilled defensively and have an abundance of pace in midfield and up front but only really created one chance in the first half, If Town were to come up against them in the Middlesex Cup it'll be a hard game too.
at 08:22