Ryman North Harlow Town were 'giant-killed' by Spartan South Midland League Kingsbury London Tigers in their FA Cup replay tonight at Townsend Lane, the home of the Tigers is only a short distance from Wembley Stadium. 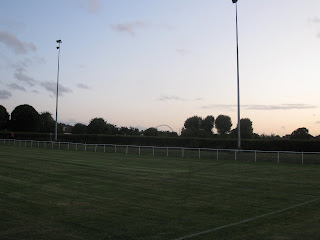 Harlow Town who are reported to be suffering from financial problems could of done with the £1500 on offer to the winners but unfortunately bowed out of the competition. Their captain Michael Pelly gave a talk to his team just prior to the start of the match with the words "don't concede and we don't loose". 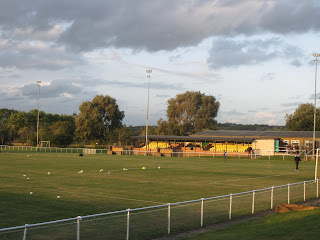 ***The main stand at Townsend Lane***

Both teams played the ball around well and it was the Hawks who had the better of the opening chances when a free kick hit the bar. The Essex side were cheered on by 20-30 travelling fans who were at times 'outsung' by the two Kingsbury fans behind the goal. The 'Kingsbury 2' can be proud of their support throughout the game as can the loyal travelling Harlow fans. 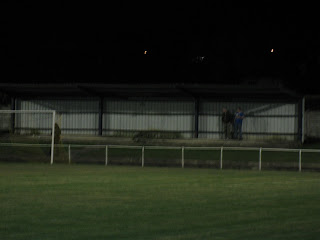 ***The Kingsbury 2 who supported their team brilliantly***

It was the Tigers who took the lead when good work by Edson Cata put through Renars Zarchenko to slot the ball past Jamie Waite in the Hawks goal.

Harlow thought they had a way back into the game almost immediately as referee Mr Mackay adjudged a foul was committed by one of the Tiger players in the box from a corner. Nobody else in the ground could see one but the referee's decision is final. 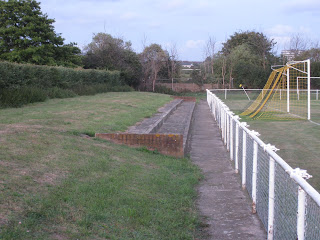 ***Terracing behind the goal at Townsend Lane***

The game then threatened to boil over a bit when Taylor and Tiger's tall imposing centre back Marcus Lansiquot had a few words.

Edson Cata then should of wrapped up the game but hit the post after some good work by what the cold end thought was the tiger's best player Renars Zarchenko who substituted a few minutes later as he picked up an injury.

Lansiquot who was already on a yellow card was then sent off after what looked like a 50/50 tackle with Darryl Doolan. From what the cold end heard the referee say he was booked a 2nd time for an aggressive attitude.

Doolan who was looking lively then scored a equaliser by smashing home a shot to the near post of Valentin. This was to the delight of the travelling Hawks fans who set off their 'air raid siren' and saw their team dominate proceedings for about 10-15 minutes with Ola Akinnawo's effort being cleared off the line by Aramand Kavaja.

It was then 10 v 10 as Harlow's Daniel Green was booked for a 2nd time for a late looking challenge on one of the Tiger forwards. 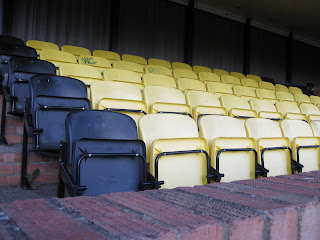 This obviously levelled the game up and Cata made the score 2-1 with a cool finish just inside the post to the delight of the 'Kingsbury 2'.

The last action of the game was Darryl Doolan of Harlow missing a great opportunity to take the game into extra time. Harlow's impressive midfielder put his shot agonisingly wide.

Overall a closely fought game which either team could of won. Anthony Anstead can be proud of the team he has put together in just a short space of time, The cold end hopes the reported financial problems can be sorted out sooner rather than later.

Kingsbury London Tigers now visit Southern League Premier Bedford Town in the 1QR of the FA Cup. The Cold End wishes them the best of luck on their trip to Bedfordshire.