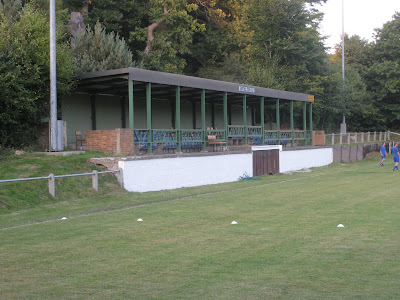 Ampthill Town's ground is very nice and picturesque with tree's surrounding near enough the whole perimeter. The main stand is above the level of the pitch making viewing of the match great with the crowd looking down onto the game (very much like the view you used to get at Edgware Town's White Lion Ground)

The game was just about shaded by Sport London who looked a much better organised team from when the cold end had last seen them play versus Tokyngton Manor in August with them hitting the bar once and the post twice as well as drawing a great save from the Ampthill Town goalkeeper.

In the second half a defensive mix up by SLEB let in Ampthill to score their first goal. The home side went down to ten men just afterwards when one of their player's was sent off for a second bookable offence following a innocuous looking challenge. In the closing minutes of the game Ampthill broke the SLEB offside trap and scored a 2nd to put the game out of reach.
Sport London look a very fit side and as stated are now much better organised so their first win of the season should come sooner rather than later, Maybe away at Crawley Green on Saturday.