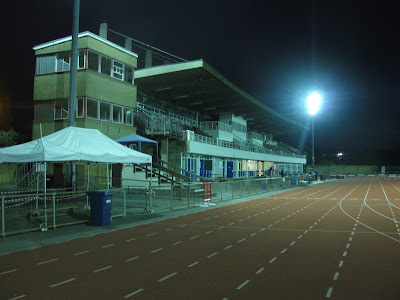 This was the first time I had visited the copthall stadium since turning out for Wroxham Park reserves in the Barnet Sunday league in the mid 90's on one of the surrounding pitches. The stadium is primarily used by Shaftesbury Barnet athletics club but is now also home to Kentish Town FC.

With the six brightly lit big floodlights surrounding the pitch, the big concrete posts strutting up from the main stand and the 8 lane running track the stadium has the appearance of so many of the Eastern European stadium's you see in the early rounds of the EUROPA league/UEFA cup, albeit a mini version.

This game was an entertaining one played in a sporting manner by both teams. Kentish Town's keeper must be the fittest in the league as every time the ball goes behind the goal he has to run a fair distance to get it..He probably prefers to play away games!

With about ten minutes gone the home side took the lead through a fine strike from the edge of the box by yellow booted Charlie Kanaris, which went flew past Axinte Valentin in the Tiger's goal who had no chance.

The tigers then had the best of the play for about 20 minutes with Edson Cata and Renars Zarchenko both looking good up front. The later putting the game at 1-1 with a crisp finish past Netanel Elraz in the Kentish goal after some great interchange play which wouldn't of looked out of the place on Match of the Day. Cata then had a shot blocked by a defender in front of goal which he was unlucky not to score from. 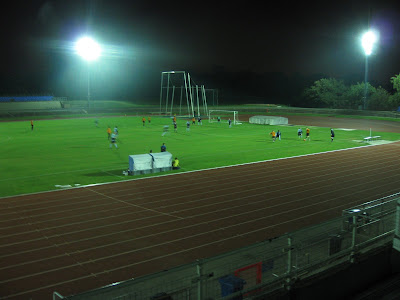 Kentish came back into the game and Ossie Barkat will have wanted to have done better when the ball was swept into the box only for him to mis-kick it out for a goal kick when he would of had a great chance had he controlled it. Mariusz Serwin also looked lively up front for Kentish.

The tigers then should of made it 2-1 after a great ball in from Cata on the right Zarchenko found himself unmarked in the middle of the penalty box only for his shot to go straight at the keeper. He should of scored.

Serwin was then unlucky with a brave header which didn't trouble Valentin in the Kingsbury goal and Tiger number 7 Paulius Olisausakas had a shot blocked which was heading for the target. Just before the break Fabion Simms should of sored for Kentish after a great ball into the box he was unmarked on the near post, he mis-kicked the ball drifted across the goalmouth.

Simms made up for this after the break making it 2-1 to the home side with a nice finish into the corner of the goal.

Zarchenko was then replaced by Wadar Ahmedi as he had taken a knock. Kingsbury didn't really look an attacking force after this with Cata doing his best woking really hard to no avail.

A comical incident happened when a Kentish player was laying injured requiring treatment a tiger player on the ball done the sporting thing and kicked the ball out of play straight at the injured player hitting him on the head. Luckily everyone laughed as it was an accident.

Kentish then scored a third when substitute James Lindsey beat the tiger offside trap and lifted the ball over the keeper into the net. A good goal.
**Lindsey's goal for Kentish Town**

Kingsbury came back at Town with Cata adjudged offside when 'scoring' a goal. They then got a penalty following a trip on the corner edge of the box and it was Cata who converted the spot kick making the game 3-2.

Kingsbury were unlucky not to get anything out of the game but they couldn't get an equaliser, Lindsey was also unlucky not to make it 4-2 with a shot on the turn close to full time.

The game finished after about 5 minutes injury time the referee added on most probably for the amount of times the ball went out of play and either another one had to be provided or a player had to run to get it off the track.

The cold end did notice with about 10 minutes to go the spare balls seemed to go missing and only one ball was being used. Was this the home side trying to slow a 3-2 game down or just a coincidence??

What was refreshing to see in a week when a Premiership player has allegedly made racist remarks to a ball-boy and Jason Euell of Blackpool was said to have been racially abused by a 'supporter' this match was played between player's who were White, Black, Asian and Eastern European in a very sporting manner. What football should do is bring people together no matter where they come from or what nationally/race they are and this is what happened tonight. The cold end was happy to see this and would like to say congratulations to both teams for a great game witnessed.
at 22:31