PAUL PUTS THE SKIDS ON BRENTWOOD 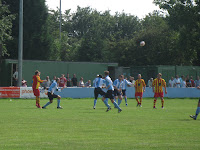 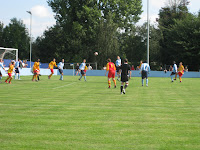 Brentwood Town supporter's planned protests in light of Carl Griffith's departure didn't materialise today as Town won a game of few chances 1-0.
The first 20 minutes of the game were very scrappy with the ball bogged down in midfield and no real clear-cut chances. After about 30 minutes Town got their first chance when Darrell Ellams launched a long throw into the box towards Chris Wild, the ball bounced over the keeper and with goal gapping no Town forwards were near the ball to score and the Brentwood defence cleared.
The only other real clear cut chance of the half was for Brentwood when their forward should of scored when in front of goal but Rob Blackburne saved well.
The second half was much of the same apart from Town's goal. A cross in from the right went across the goal just inside the penalty box for Paul Marks to rise up and head past the Brentwood keeper.
Brentwood looked very poor up-front and didn't really trouble Rob Blackburne in goal, this was helped by David Allen playing at centre back who was immense and didn't give their forward line an inch. A man of the match performance.
So a game of few chances but the result is what matters. Town can build on this for Tuesday night's game.
A clean sheet, a good battling performance all round against a strong Brentwood side and 3 points taken back to North London for the start of the season. Stuart Blackburne had a quite game which in my book means he's going to score on Tuesday night with a better performance. Adam 'Gunz' Wallace also battled away up front and looks a good prospect.
The Brentwood fans known as the Sky Blue Ultra's with their drum and bell fell silent with about 20 minutes to go and most just sat down drinking their tinned lagers. Their chant of "Sh*t kit, Sh*t fans" was met by some town fan's "Sh*t kit but we're 1-0 up". (Brentwood fans have bad taste - it's a quality kit) They then turned on their own team with 'We're sh*t and we know we are" followed by songs about them going down with Ilford back to the Essex Senior.
As i've stated before the Brentwood fans should be thankful they've got a club to follow with their own ground at a decent standard. Just under 4 years ago in their opening home match in the ESL they drew 39 spectators for the game with Waltham Abbey (03/09/05)
Roll on Tuesday night and another 3 points.
ETFC Team
1. Rob Blackburne
2. Fabio Valenti (sub Dave Blower)
3. Darrell Ellams
4. Chris Wild
5. David Allen
6. Ross Edwards
7. Paul Marks
8. Andy Jones
9. Adam Wallace
10. Stuart Blackburne (sub Shayne Johnson)
11. Rudi Hall (sub Matt Thomson)
The Cold End Man of the Match - David Allen
at 18:27