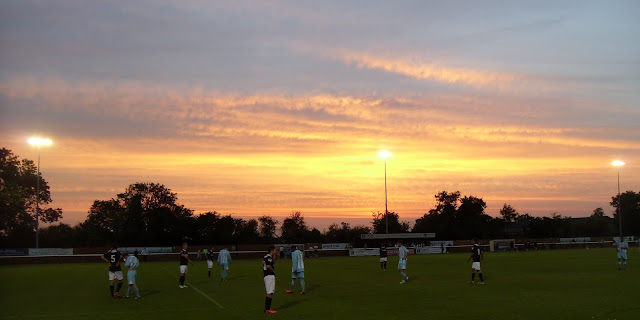 The Bedfordshire Premier Cup is a pre-season competition played between the winners of the Bedfordshire Senior Cup from the season before and usually a side representing Luton Town.

The Hatter's squad on a beautiful evening weather wise yesterday was made up of young players and trialists with The Waders playing most of their first team squad. The match, as usual with pre-season games, featured a number of player's brought on throughout the game as both sides agreed to a rolling substitution situation.

There wasn't much to talk about in the first half as both sides struggled to create any decent opportunities to score. The Wader's defence dominated in the air and looked very strong so Enfield Town can expect a really tough time on Saturday when they visit.

In the second half Wader's substitute midfielder/winger Dubi Ogbonna (ex of Soham Town Rangers) made an impact with his pace and power. His cross from the right hand side saw another substitute Alex Witham volley home past Ben Barnes in the away goal to make it 1-0.

The Hatters equalised soon after via Zane Banton who scored after a great ball put in from the left hand side. Arel Amu, on a substitute for Luton, looked really lively and was very unlucky to hit the crossbar from outside of the box. Charlie Smith also hit the post late on for The Hatters.

The match ended all square and went to penalty kicks which Luton Town won 3-2 (as you'll see from the highlights) and allowed Captain Alex Lacey to lift the trophy. The Waders sportingly gave the away side a good round of applause which was nice to see.

The Hatters fans present in the crowd last night will surely be wishing that it's not the only trophy to brought home to Kenilworth Road this season. New manager John Still assisted by Hakan Hayrettin have the task of building a side capable of winning the Conference Premier or to be successful in the play-offs in order to regain the football league status they controversially lost in 2009. Their supporters have remained very loyal as the club have sold over 4,300 season tickets to date which some League One clubs will be envious of.

The Waders will play their first ever season at Step 3 this season in the Calor Gas Southern League Premier Division which is a great achievement for a club who won the Spartan South Midlands Premier Division (Step 5) in 2009.

Some match highlights including the penalty shoot out are below -