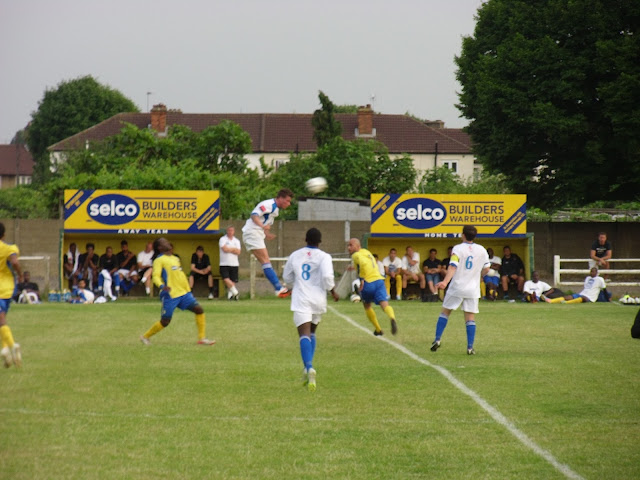 An Enfield Town XI got a decent run out in a pre-season friendly at The Real White Hart Lane yesterday with the final score being 2-1 to the hosts after they came back with two goals in the second half to cancel out Dave Kendall's first half header for the Town.

Town's team featured a number of trialists including Emmanuel Sackey (right back), Joe Foley (left midfield), Jermaine Osei (forward/winger), Kabir Jeetoo (midfielder who was with Ilford, Needham Market and Leiston last season) and forward Dean Green. Jeremey Atwere, who played for Enfield Town Reserves last season, had a really good game in the centre of midfield. He looks a good prospect in a defensive midfield role where he's strong, works hard, tackles, tracks back and plays it simple when it needs to be. Jeetoo also looks promising with lots of skill and can pick a pass out. He reminded a few fans present of ex Towner Steve Velandria in his style of play.

The last ten minutes of the game was played in dusky darkness when a localised power cut effected firstly a few of the floodlights at Coles Park and then all of the pylons went out. Luckily it was just about light enough to finish the game.

A quick mention must go to the players, officials and supporters of Haringey Borough who were very welcoming to all the Town fans present. Good luck to them in the Essex Senior League this season.