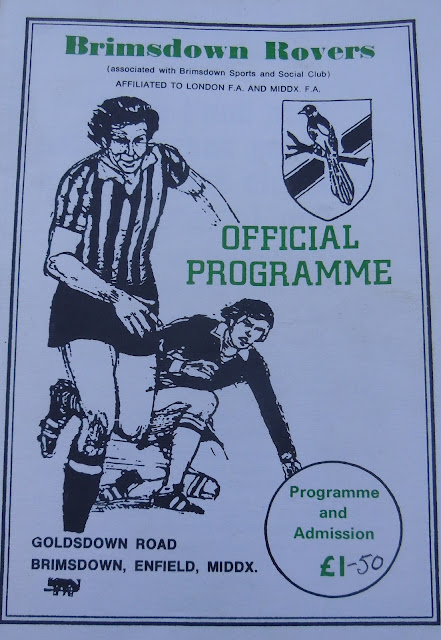 In 1990 Goldsdown Road was as Enfield Town found it when they first started ground sharing in 2001. A simple ground having just a metal rail surrounding the pitch and the stand on the far side which was set back slightly further than it is positioned now without the concrete terracing.

For this classic programme the visitors were Electrolux. They were a team based in Luton and travelled down to North London on the 8th September 1990 for a FA Vase extra-preliminary round game.


Rovers were then members of the Greene King London Spartan League (LSL) and were sitting in mid-table having won two and lost two of their opening four league games. The Magpies were managed by Derek Townshend who was assisted by the current Cheshunt manager Tony Faulkner who later took over the hot-seat in his own right.


The LSL had a few well known names as members at the time including Corinthian Casuals as well as current Ryman North teams Thamesmead Town (then known as Thamesmead), Waltham Abbey and Cheshunt.


Sadly, Electolux then members of the South Midlands League Premier Division folded at the end of the 1990/91 season and this was the last time their name was featured in the FA Vase. They entered a for a total of four seasons and never won a game.Their ground in Ely Way, Luton is now much changed and used by Luton Town for youth games. 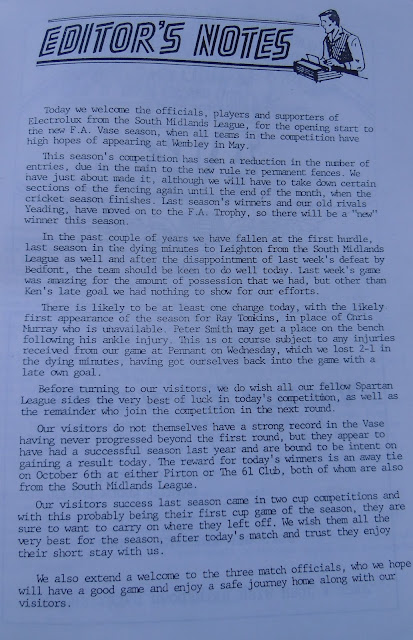 The Editor's notes section states that the Vase competition for 1990/91 'has seen a reduction in the number of entries, due in the main to the new rule re permanent fences. We have just about made it, although we will have to take down certain sections of fencing again until the end of the month, when the cricket season finishes'. The reward for the winners of this tie was an away tie at either Pirton or The 61 FC. 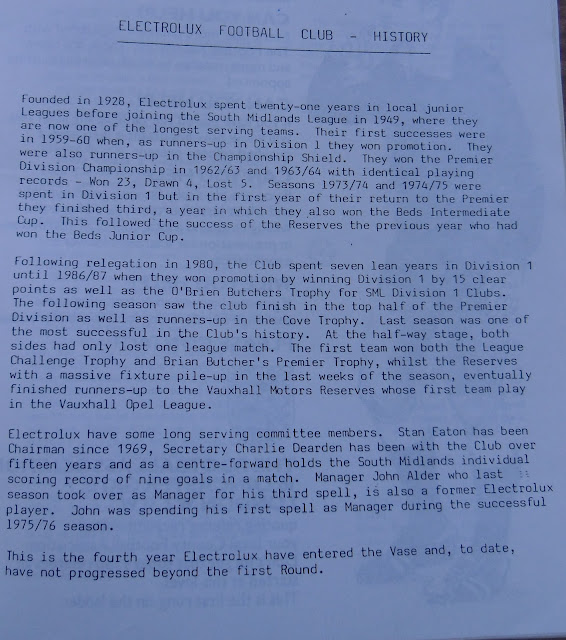 The programme also has a nice history section on Electolux Football Club. They were founded in 1928 and joined the South Midlands League in 1949. The club had some long serving committee members with secretary Charlie Dearden also previously playing as a centre-forward for the club and who as the programme states 'holds the South Midlands individual scoring record of nine goals in match'. The Cold End is pretty certain that this feat has not been repeated since.

Electrolux's manager on the day was John Alder who was in his third spell as boss which started way back in the 1976/76 season.

Brimsdown Rovers had started the season with two wins and two draws in the league with Ken Wade amongst the goals in the pre-season games as well as the season proper. 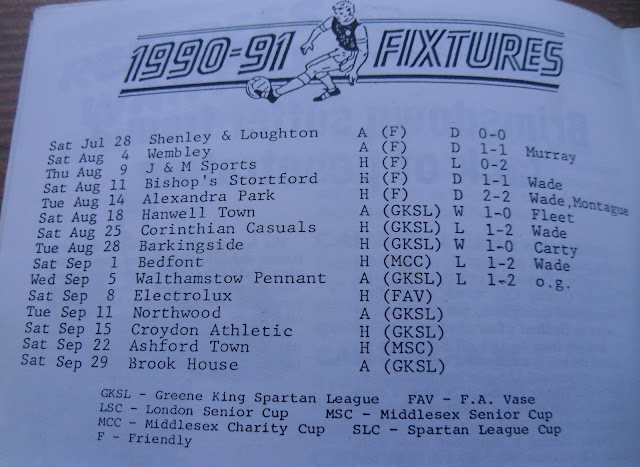 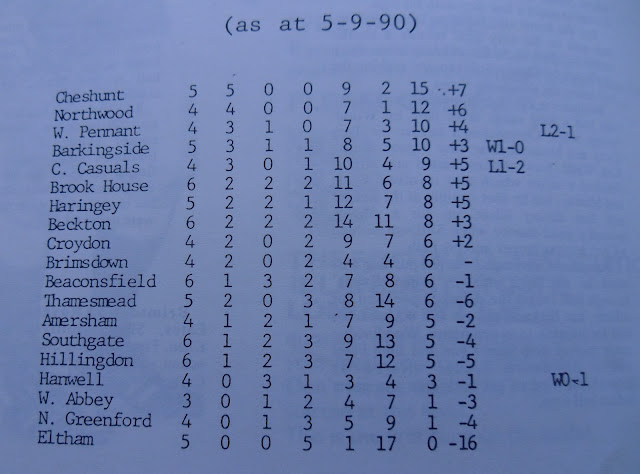 There is  also a 'player-profile' section for Danny Sullivans in which the then 31 year old details his previous clubs as Bishop's Stortford, Leyton-Wingate and Tipples FC (who played at The Mile End Stadium). He listed the highlight of his career as 'playing with former Arsenal player John Radford at Bishop's Stortford' and the low point as 'missing the First Round of the FA Cup against Swansea City'.

As is commonly known Brimsdown Rovers disappeared from senior football in the summer of 2010 when they withdrew from the Spartan South Midlands League with Enfield FC 1893 moving into Goldsdown Road.

The name of Brimsdown Rovers does still exist with a number of teams in junior leagues around the area and a Saturday adult team in the GA Roberts Enfield Football Alliance. This season the league has only six teams following the withdrawal of Renegades with Brimsdown Rovers facing Broadwater United, Origin, Persian, FF London and Crescent Rangers.

Their next game is away to Broadwater United on the 31st March which is due to the played at Low Hall Sports ground in Walthamstow. 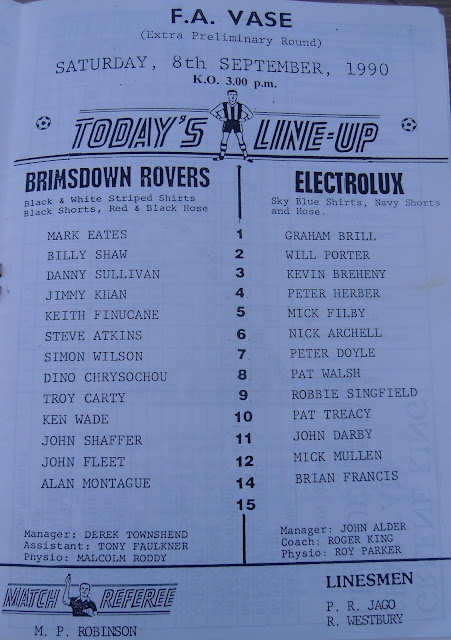 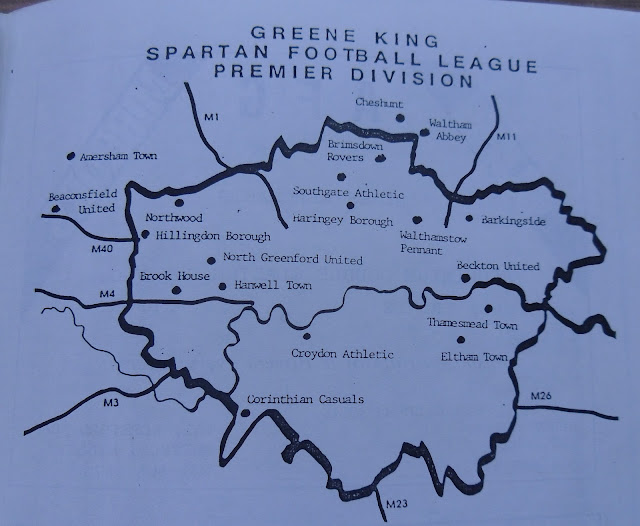 Brimsdown Rovers last game in the Spartan South Midlands League came on Saturday 1st May 2010 when Hertford Town were defeated 3-2. The scorers for The Magpies on this historic day were Crosbie, Teppett and Waldron.

This match was won by a scoreline of 2-0 and I can confirm it was witnessed by the cold end (I was 13 years old at the time), I can't remember much about my first visit to Goldsdown Road apart from buying a copy of the Non-League magazine in the bar area. Rovers went on to beat Pirton (1-2) and Hounslow (3-0) in the Vase that season before bowing out 0-1 to East Thurrock United in Second Round.

As a bonus here is the programme for the Middlesex Senior Cup First Round game played on Tuesday 11th January 1994 at Southbury Road. Tony Faulkner had taken over as manager in the summer of 1993 after Rovers had won the London Spartan League but been denied promotion due to Goldsdown Road not meeting the criteria met by the Isthmian League. The LSL shows Brimsdown Rovers in fifteenth position sandwiched between Walthamstow Pennant and Beckton United.

Enfield played a strong side including Gary McCann, Graham Roberts, Mark Pye, Paul Hobson, Martin St Hilaire, Garry Britnell and Leroy Whale. The game in front of a 233 crowd ended 1-0 to Enfield with Leroy Whale scoring the only goal of the game. 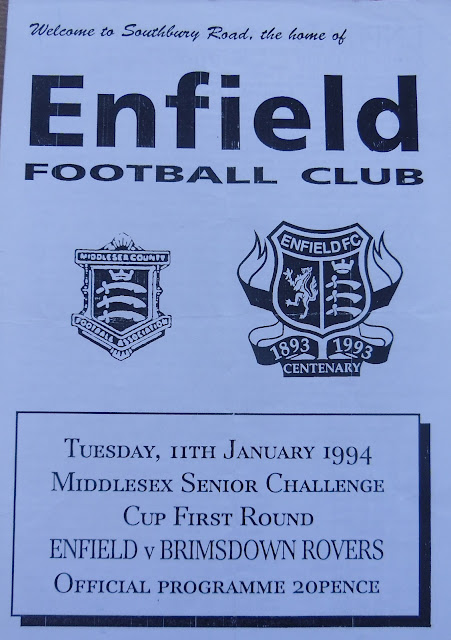 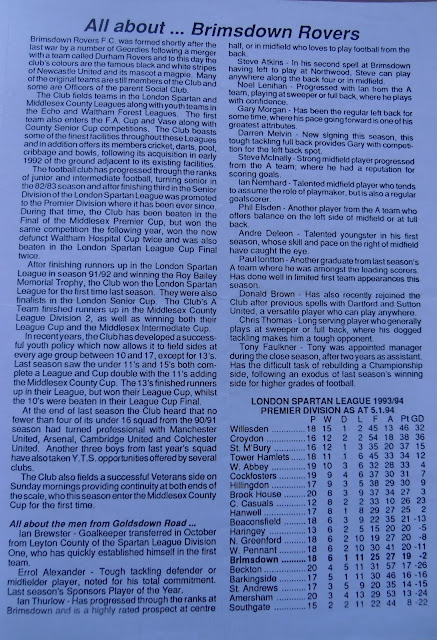 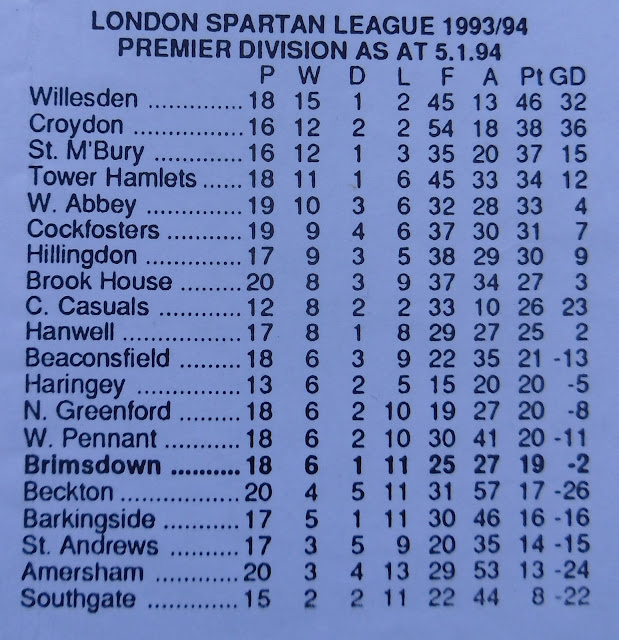 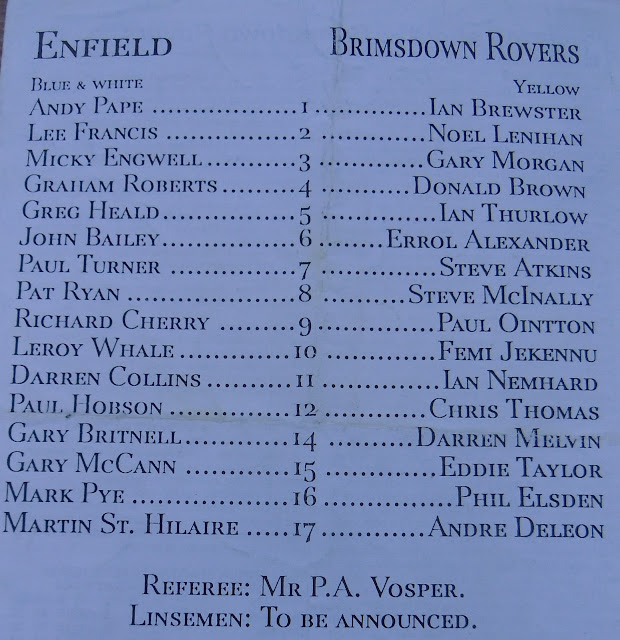