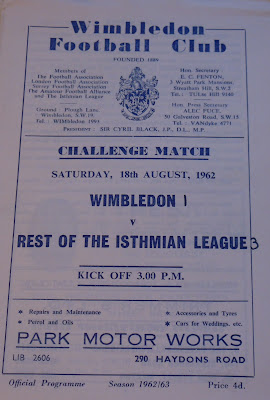 Wimbledon were members of the Isthmian League from 1921 through to 1964 during which time they won the title eight times. Three of those occasions came in 1961, 1962 and 1963 before they moved to the Southern League for the 1963/64 season. Their last season in the league was Enfield FC's first with the E's gaining a respectable 5th place finish after winning the Athenian League for two years on the trot.

On Saturday 18th August 1962 Wimbledon the reigning Champions and as the programme states 'accepted the challenge of the other league clubs in an annual encounter' and 'we know, gentlemen, that none of you are strangers to Plough Lane and we hope you will enjoy your return to our enclosure'

The programme has a section entitled 'Casualty Corner' which details that Wimbledon's last game of the 1961/62 season was the London Senior Cup Final at Dulwich where four players were abroad on International duty and three players absent through injury with Eddie Reynolds and Mike Kelly playing despite carrying injuries which would require later visits to the Nelson Hospital.

The section states 'other members of out playing staff were suffering from the aches and pains which are almost inseparable from a hard-fought season of soccer, but at the time of going to press we are happy to record a clean bill of health'.

Reynolds is listed as playing in the game and together with Ted Murphy were to be part of an Isthmian League side who were to travel to Uganda to take part in celebrations to commemorate the granting of Independence. 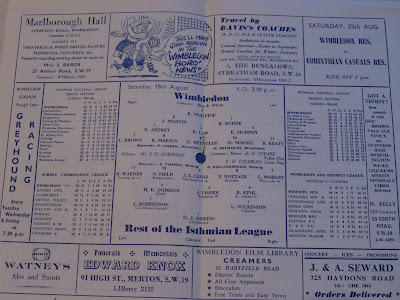 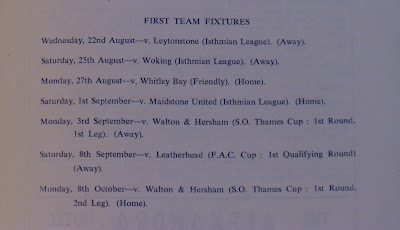 They went on to lift the FA Amateur Cup at the end of the season beating fellow Isthmian League sides Leytonstone 2-1 at Highbury in the Semi-Final before Sutton United were beaten at Wembley by a score of 4-2.

With fixture list so congested nowadays the cold end can't recall the Isthmian League having a representative side in the last few years...Can anyone help with when a team last played???...Please contact the cold end with information if you can?.