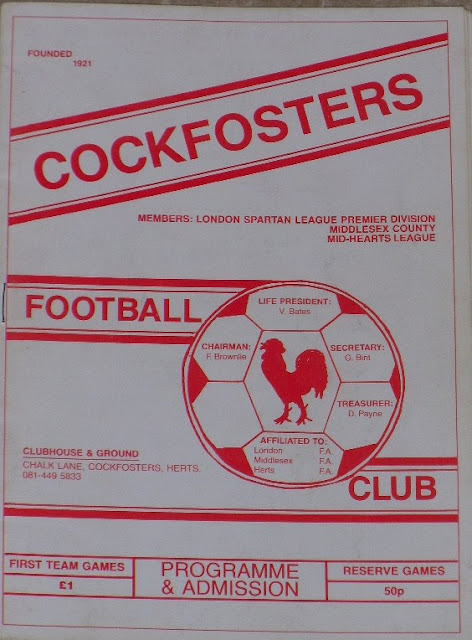 This game was the third time the two sides had met in the space of only a few weeks as they had fought out a  0-0 draw in the Middlesex Senior Cup followed by a surprise 2-0 victory for Fosters at Silver Jubilee Park on the Tuesday night prior to this Vase game. The difference between the two sides on that night was the home side's goal machine Gary Aggio who had already hit the net 21 times in the season up until this game. 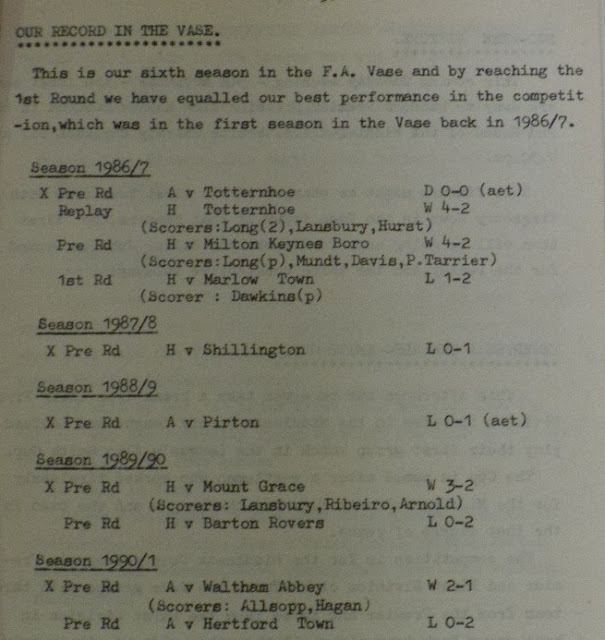 Fosters, then managed by Jeff Voyce, as you can see from the league table had not had the best start to their league campaign winning only once in nine games. The win coming courtesy of a 1-0 win at home to Hanwell Town with the goal coming from that man again Gary Aggio.

In the Vase they had a better record winning against THE 61 FC (Luton) 4-1 away with Aggio getting a brace and away at Kempston Rovers 3-1 with one soon to be Enfield FC player Justin Gentle on the score-sheet. Justin's brother Dominic was also in the Cockfosters squad for this game.

﻿﻿ ﻿﻿ ﻿The cold end was actually at this game and my only memory is of a hardy group of Kingsbury Town fans with a Union Jack emblazoned with 'Kingsbury Town' across it.
The London Spartan League at the time had a host of familiar names as members with a local(ish) feel to it as Cheshunt, Brimsdown Rovers, Haringey Borough, Cockfosters, Southgate Athletic, Barkingside and Waltham Abbey were all competing in the Premier Division. At the time Fosters also had a reserve team in the Middlesex County League Division One and an 'A' team in the Mid-Herts League.

The programme cost a £1 which also included admission. Great value for money for 19 pages of original material.

The result of this game was another draw between the two sides with the game ending 1-1. The replay was won by Cockfosters who recorded a 4-1 victory at Silver Jubilee Park to qualify for the 2nd round where they visited Great Yarmouth Town and were knocked out in a 2-1 defeat.

Town's near neighbours have only qualified for this stage of the Vase on one further occasion since in 2007/08 season when Southend Manor, Sporting Bengal and Bedfont Green were defeated only for Romford to win 3-1 in the 2nd round. They have entered the competition since 1986/87.

Kingsbury Town became Kingsbury London Tigers after a merger in 2006. Their last game in the Vase as Kingsbury Town came at Crown Meadow in Lowestoft when the home side recorded a 2-0 victory in a third round tie. Town had a lean spell in the competition from 1993/94 through to 2000/01 when only one win was recorded against Rayners Lane. They had three good runs to the third round after this in 2001/02, 04/05 and the above 05/06 season.

Cockfosters currently play in the Spartan South Midlands League Division One (step 6) and Kingsbury London Tigers play in the SSML Premier Division (step 5) which although different leagues are the same level they were playing at in 1991.
at 11:44