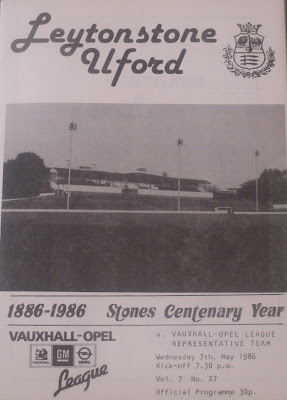 This programme marked the last ever competitive match played at the historic ground of Granleigh Road. Leytonstone/Ilford had finished the season in 12th position in Division One of the Isthmian League sandwiched between Lewes and Finchley.

The game not only marked the last ever game before the club moved to Green Pond Road and incorporated Walthamstow Avenue but also 100 years of football for Leytonstone who were formed in 1886. The programme states Ilford purists would feel a little cheated as their club were 105 years old being founded in 1881. The coalition of the two big East London rivals in Leytonstone and Ilford had happened in 1979. 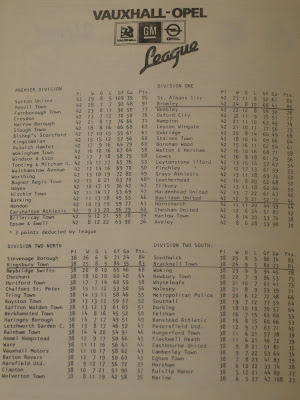 In Ilford's history section the programme states their first ever recorded game in 1881 was against 'Forest Gate Amatuers' who on enquiring about the changing facilities were directed to a deep ditch on the far side of the ground. The Ilford side didn't need a dressing room as they played in ordinary attire which didn't seem to effect their performance as they won the match 2-0. Celebrations were had with their opponents in a little coffee house which then stood on Ilford High Road.
L&I were then managed by John Still who of course has gone on to run very successfully the club which grew from the Leytonstone/Ilford/Walthamstow Avenue/Redbridge Forest and Dagenham mergers. The representative side was managed by Sutton United's Barrie Williams and Larry Pritchard. United had pipped Yeovil Town to the Premier Division title by four points.

In the L&I side were several well known Isthmian players such as Dave Mallett, Micky Dingwall and Lincoln Manderson (who went on to represent Enfield FC in the early 1990's). In goal for the representative side was Mark McCutcheon who was playing for Billericay Town at the time who had been relegated from the Premier Division. The giant keeper went on to play for Enfield FC along with Manderson in the early 90s.
Also in the side was Alan Pardew who was playing for Yeovil Town at the time prior to his football league career. Pardew had transferred to Huish Park from Dulwich Hamlet for a fee of £5,000. Only Colin Dixon of Uxbridge who played in Division One at the time played for a club outside of the Premier Division in the representative side. 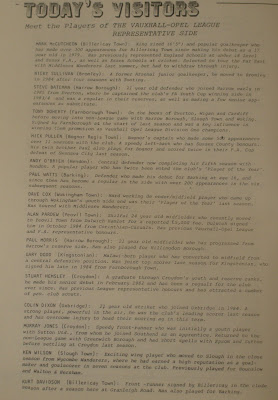 Leytonstone/Ilford's last ever league game at Granleigh Road was on the 26th April 1986 when they drew 1-1 with Finchley in front of 74 people. There highest crowd of the season being 161 in the home game versus Leyton/Wingate on the 29th October 1985.
John Still went on to manage Maidstone United, Dagenham and Redbridge (the club which emerged from Leytonstone/Ilford and others), Peterborough United and Barnet before returning to Victoria Road to take the club into the football league. The amazing 6-0 play off semi-final first leg result yesterday sees the Daggers firmly on their way to Wembley and possible promotion to League One.
The cold end thinks Still is one of the best (if not the best) managers in the lower divisions of league football as a vast number of his current squad having been picked up from non-league football. 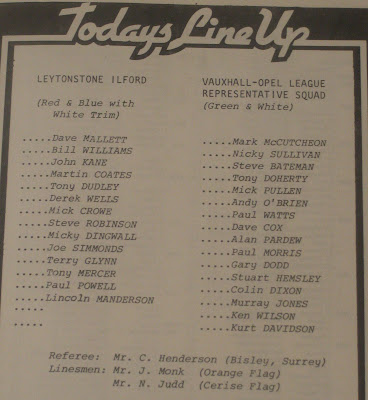 Of the squad for yesterday's game the following players were all signed directly from non-league football:
Scott Doe (signed from Weymouth), Danny Green (Bishops Stortford), Jon Nurse (Stevenage), Josh Scott (Hayes and Yeading), Paul Benson (White Ensign), Graeme Montgomery (Wealdstone), Phil Walsh (Tiverton Town), Chris Lewington (Hampton and Richmond) and Tommy Tejan-Sie (Braintree Town).
Nine players out of the sqaud of eighteen shows Still and his staff have a great knowledge of the non-league game. No doubt more players will arrive at Victoria Road in the Summer even if the club are promoted to League One.
*click on the images to enlarge and read
at 10:29