ISTHMIAN PROGRAMMES OF THE PAST 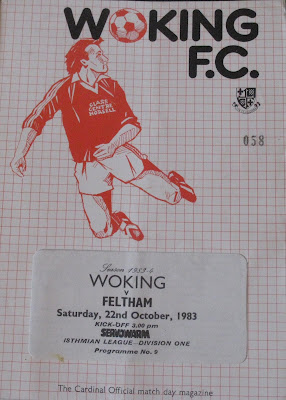 After spending the last seventies as a Premier Division club, Woking were relegated to Division One for the 1983/84 season and even worse was to come when the Kingfield club were relegated to Division Two (South) in the 84/85 campaign. Enfield FC fans all know what happened from the 90/91 season when Woking were promoted back to the Premier Division with their subsequent rise into the Conference along with national FA Cup fame. The peak of The Card's campaign in the conference was the 94/95 season when they finished second to Macclesfield Town and the following season when they were runners-up to Stevenage Borough, another club who as we know had rose rapidly from the depths of the Isthmian League.

The programme/matchday magazine is 12 pages and contains a good three pages on the visitor's pen-pictures and history. Feltham included goalkeeper John Loizides who was 19 at the time and had spent a season at Chelsea along with player's such as Razzo Denman, Roy Gadsby and Billy Collacott amongst others. The Woking side listed included Clive Holmes in goal and Tom Jones at number 7.

Back in October 1983 Woking had suffered a very poor start to their season winning only 3 of their 11 league games with the visitors one point above them in the league table after winning 4 of their 10 opening games. Division One at the time was at 'step 3' of the Pyramid and contained Cheshunt, Tilbury, Clapton, Oxford City and Metropolitan Police amongst others. The Lions of Wembley were top as of 22/10/83 having made a storming start winning 7 of 11 games. The Vale Farm club missed out on the glory of promotion by 4 points finishing in the third place at the end of the season. Then Fourth placed Epsom & Ewell finished in second place and then sixth placed Windsor & Eton were champions with both clubs promoted to the Premier Division.

Feltham despite their average start were only to win another 3 games all season and finished cut adrift at the bottom on the pile on 25 points, the next team above them was Cheshunt on 44 points. Woking finished in mid-table on 55 points in 13th place.

Both the Ambers and the blues were relegated to the newly formed Divison Two North and South respectively. The next season due to the reorganisation and introduction of two Divison Two leagues four clubs were relegated. Woking finished in 19th place on 51 points and suffered the dreaded drop. This total in 83/84 would of got them to 16th place and the comfort of safety.

Feltham stayed around in the Isthmian League lower reaches and in 1991 changed their name to 'Feltham and Hounslow Borough' following a merger with local side Hounslow who had dropped out of the Southern League in 1990 and played one season in the Hellinec Premier in 1990/91. The newly formed partnership played in the Isthmian Divison Three for a total of four season's finishing 16th, 20th, 14th and 18th when in 1995 following joining the Combined Counties League they dropped the '& Hounslow Borough' becoming just Feltham again. 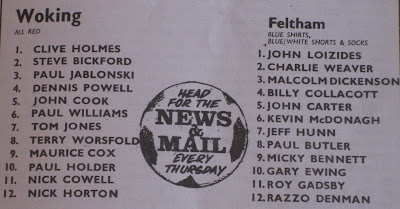 Feltham did play at the Feltham Sports arena ground which was famous for it's plastic pitch but have spent the last few season's ground sharing with neighbour's Egham Town, Hampton and Richmond and now at The Orchard the home of Bedfont FC. Happily the London Borough of Hounslow have recently granted planning permission for the ground to be redeveloped and the club plan to move back soon. Hopefully, the club were Fulham legend Johnny Haynes spent time on loan as a youngster may return to a higher level of non-league football soon. 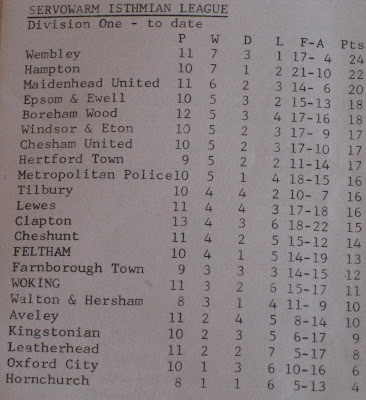 The Isthmian League Division One (as it stood in October 1983)

How many Woking fans in 1983 would of thought they would get so close to promotion to the league and gain national fame for their FA Cup exploits???? That season they were "giant-killed" themselves by Sussex County League side Hailsham Town 1-2 at Kingfield in the Preliminary round.

Feltham's best run in the FA Cup was in 1977 when they met Tilbury in the 3QR and lost 1-4, they reached this stage again in 1982 and lost out to Chesham United 1-0. This season is the first time since 1994 when then Feltham and Hounslow Borough lost at Dagenham and Redbridge 1-3, that Feltham have entered the world's most famous cup competition, falling at the first hurdle 4-1 away at East Grinstead Town.