Isthmian Programmes of the Past 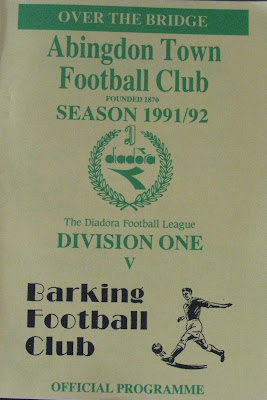 Barking faced a long midweek trip from East London to Oxfordshire in this Division One fixture. Town were having a great season in second place on 29 points behind leaders Stevenage Borough with the visitors having a reasonably good season down in sixth place on 23 points. Division One of the then sponsored Diadora League was at 'step 3' of the Pyramid equivalent to the Premier Division now.
The home side included several stalwart players in captain John Harvey-Lynch (320 appearances at the time), Keith Appleton (258 apps) and Kelvin Alexis (241 apps) with Barking listing former Enfield FC player Danny Benstock together with non-league legend Steve Portway and another ex-E in Henry Hughton on the bench. The hosts had thrashed league leaders Stevenage Borough on the 19th October 4-0 at Hales Meadow and had been losing to Tooting and Mitcham United on the previous Saturday only for the game to be abandoned due to Fog. The programme entitled "over the bridge" has a feature that would of interested visiting fans titled "and I think there's been a goal at Barking" which details Barking's (managed by Eddie McCluskey) run to the FA Cup first round in 1979 when they played then league side Oxford United at home featuring soon to be Enfield FC greats Ashford and Ironton.

Town finished in 6th position of the league this season and played in the Isthmian League up until 2005/06 when they joined the Hellenic League. The club have since struggled finishing in the lower half of the table every season. Town formed in 1870 are not to be confused with their Town rivals in Abingdon United (founded 1946) who were promoted from the Hellenic League coincidentally in 05/06 and have plied their trade in the Southern League S&W Division ever since. The club's home ground's are just over a mile from each other in the Town. 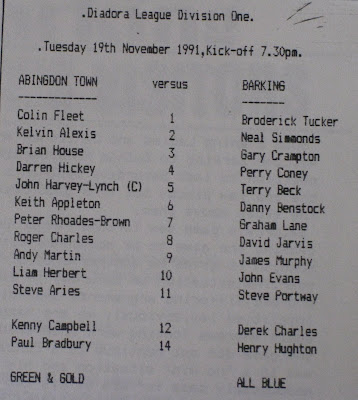 Barking who were relegated from the Premier Division in 1991, finished 12th in the table for the 91/92 season and have never returned to the glory glory days of the the 78/79 season when the Isthmian Championship was won. They now play in the Essex Senior League following reformation in the Summer of 2006.
at 10:05