A RETURN TO WINNING WAYS AT BAYLISS AVENUE 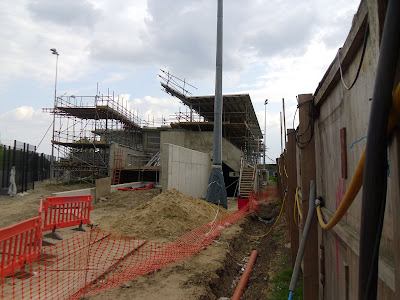 After last weekend's defeat at Ware it was a pleasing to see a good performance today from Enfield Town in a 0-3 victory at Bayliss Avenue against a Thamesmead Town side who continue on their recent poor run of form. The South London side have only one win in their last twenty games and in eleven of those they have not scored. They have only scored twice in the run of twenty games on one occasion against Ilford at home on the 5th March and it's now been four games in a row without a goal. 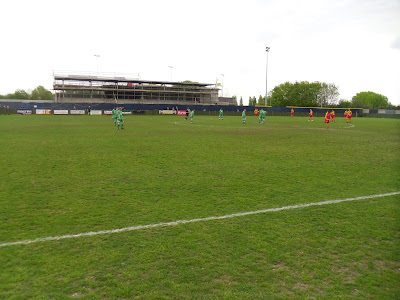 Steve Newing's side were in control of the game for start to finish in front of just 79 people which is the lowest league crowd Enfield Town have played in front of on a Saturday since formation in 2001.

Liam Hope opened the scoring in the opening moments of the match followed by a great finish from outside of the box by Richard Morton to make the score 0-2 at half time. In the second half a fantastic cross from the left hand side by Walid Matata allowed Adam Wallace to head home to make the scoreline 0-3. 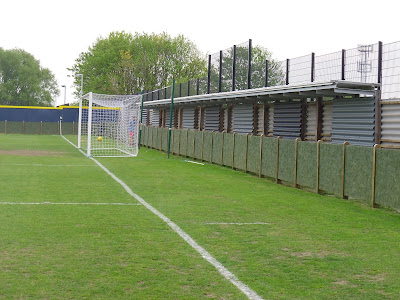 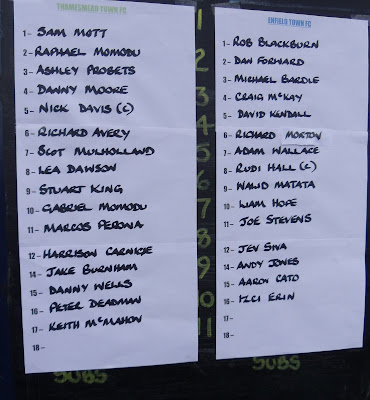 It was good to see Aaron Cato and Izci Erin coming on as substitutes late on with both of them linking up to win a penalty kick for the Town right on 90 minutes. Erin passed the ball to Cato whose cross, after skillfully beating his man, was handled by a Thamesmead defender inside the box. Rudi Hall's resulting spot-kick was well saved by Thamesmead goalkeeper Sam Mott who despite letting in three goals had a good game and kept his side in it in the first half with some good saves.

The new stand at Bayliss Avenue is gradually taking shape as you can see from the pictures. I believe it will be open sometime next season.

﻿ ﻿
﻿ ﻿
﻿ ﻿ Apart from the 69 people who turned up for the Waltham Abbey v Waltham Forest game which sounds like it was an amazing game finishing 5-4, the figure at Bayliss Avenue this afternoon was the league's second lowest crowd figure of the day.

﻿
﻿ ﻿ ﻿To qualify for the play offs, as stated after last weekend's defeat,  is now an uphill battle against the odds but those fans that travelled (and those that didn't) to Thamesmead today will know the future is bright for Town with a good manager, a good side and a new stadium to call home from next season.

MATCH HIGHLIGHTS ARE BELOW INCLUDING ALL THREE GOALS