The reserve side of AFC Dunstable who ply their trade in the Spartan South Midlands Reserve Division One took on Bedfordshire County Division One side Bedford Hatters on Wednesday 20th April at The Carlsberg stadium, the home of Biggleswade Town in the Bedfordshire FA Intermediate Cup Final.

The competition dates back to the 1938/39 season when Wymington FC lifted the trophy and since then teams such as an Army XI from Ampthill (1942), Tithe Farm (1973) and Eaton Socon (1995) have won it amongst other teams.

The Hatters are having a great season and currently top of their league with the AFC side fifth in their league table. To quote the Hatter's website they are "a team of lads in their mid 20's who are all friends and have played together in different teams over the years. I decided to form this team to bring back the good old days, which involved having a laugh, winning games and eventually picking up some silverware! The name basically reflects our hometown and the managers support for Luton Town hence 'Hatters'. Lets get stuck in this year boys and make the most of it whilst our knees can still take the knocks!!!!!!" 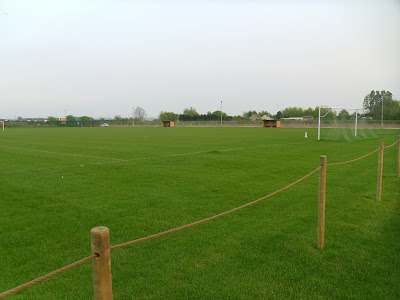 With the warm sun still shining and just preparing the set as the game kicked off this was a perfect setting for the beautiful game and a very entertaining match took place. Both sides had good chances in the opening exchanges but it was AFC Dunstable who took the lead with a free kick which appeared to take a slight deflection off the wall. The Hatters equalised with a penalty after a player was brought down inside the box. AFC then had their keeper to thank for the scoreline being equal when he pulled off a classy double save just prior to half time.

AFC took a two goal lead in the second half and looked comfortable having chances to make it 4-1 but it was The Hatters to their credit who came back into the game late on to make 2-3 with only a few minutes left. Late on a shot from outside of the box just went over the AFC bar for them to victorious and lift the cup after 90 minutes of good football. Congratulations to them from the cold end.

As well as the Division One title that is within their grasp The Hatters do have a chance  to win some silverware this season when they take on Bedford SA in the Beds County League Centenary Cup on the 6th May at Biggleswade United's Second Meadow ground.

All the match highlights are below including all the goals -