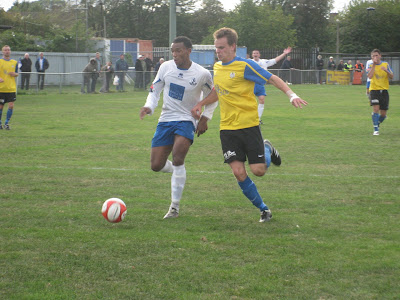 Town found the net four times today in an impressive victory versus a hard working Eastbourne Town side who looked well beaten when Stuart Blackburne scored Town's 2nd goal. The visitors started the brighter and had a header saved by Rob Blackburne in the Enfield goal and a shot across goal off target. Gradually Enfield Town got into the game with Stuart Blackburne and Adam Wallace working very hard up although no clear chances came. Stuart was full of running as usual and played very well.

Richard Morton was unlucky not to get his shot on target when sticking his leg out following a long ball over the top. Fabio Valenti playing in an unaccustomed left hand side roll put over some good crosses to no avail and Matt Thomson had a good shot on target which never really troubled Tanner in the Eastbourne goal. Jack Dixton then had a good run through the Enfield defence but seemed to take one too many touches and was unable to get a shot in on goal. 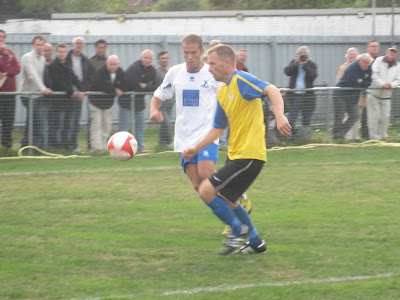 Enfield then started to dominate the game with a Adam Wallace crossing in from the left hand side for Stuart Blackburne to crack in a shot on target with Russell Tanner no where to be seen, the keeper jumped and turned his back and the ball rebounded off his backside and over the crossbar. A very luck save which I'm sure Tanner who was on good form with the Town fans behind the goal will say he meant to expertly save. Tanner had earlier used the word 'Tosh' to describe his team-mates efforts at throw ins. 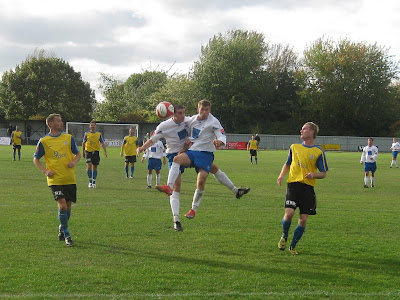 Minutes later a mix up between Tanner and his right back Oliver Rowe where the Eastbourne custodian didn't call for the ball and Rowe left it thus giving the ball away to Enfield to put a cross into the box which was then clearly handballed by an Eastbourne defender causing referee Mr Donnellan to point towards the spot. Rudi Hall for the 2nd week in a row despatched the spot kick to the keeper's right, Tanner guessed right and was close to saving it.

Eastbourne then had a great chance to equalise and it's still hard to beleive Liam Baitup didn't hit the back of the net. A ball was crossed in and Baitup controlled in with no defender around him had so much time to put the ball past Blackburne he should of scored. The resulting shot rebounded off the crossbar much to the releif of the Enfield back four.

Enfield had been kicking towards the downs end of the ground and supporters making their way around the cold end at the break realised how blustery the conditions were. Enfield Town now had the wind though which was mainly blowing towards the cold end. The first 20 minutes of the 2nd half was a fairly level affair with Eastbourne Town trying to counter attack to get an equaliser but didn't really have any great chances. They did have one half chance when a cross came in for Danny Simmonds at the near post, An excellent challenge by Chris Wild snuffed out any chance Simmonds had. 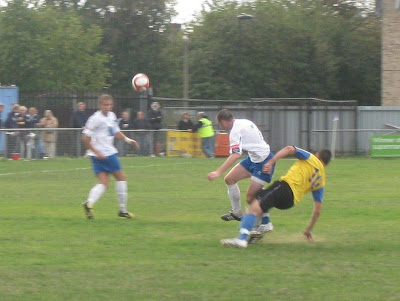 Stuart Blackburne chased all the balls launched over the top and on more then one occasion got there when the ball looked like it was going out of play. 100% effort and great attitude from Stuart today.

Stuart got Town's 2nd and the goal his play richly deserved when Fabio Valenti put a wonderful hanging cross over to the far post which Stuart headed past the unlucky Tanner in the Eastbourne goal.

Shortly later Adam Wallace turned Paul Richardson into knots in the penalty area with a great run and put an unstoppable shot into the roof of the net. A great goal by Adam who has been working hard in the past few games and is now getting the goals he is capable of. With the game in the bag Alex Kirby came on for Matt Thomson who looked like he had taken a knock and the front pairing of Wallace and Blackburne were replaced with Roberto Minniti and Shayne Johnson.

The fourth goal came shortly before the end of the game when Fabio Valenti's corner was headed on towards and past Tanner with some Itlalian flair by Minniti to make it a good victory for the Town.

A good game where the Town team worked together to beat a hard working Ryman Division One South side with an impressive performance. Well done Town!!!