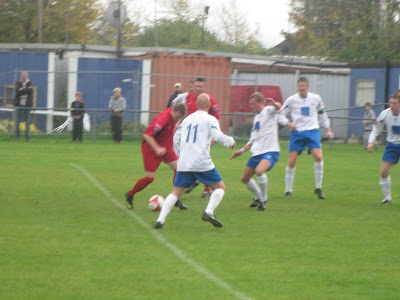 Fine rain fell throughout the first half of the match with the sun trying to break through the cloudy conditions, what did only shone on East Thurrock who had the impressive Steve West and Sam Higgins up front and at times it just looked too easy for them. Having said all this it seemed every chance the Essex side created they scored from and Town did have chances to make it a more competitive encounter. 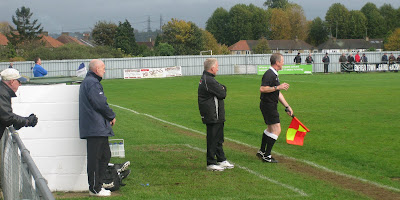 Roberto Minnitti who had kept his place up front with Adam Wallace warming the bench had the first chance of the game. Fabio Valenti robbed Thurrock right back Ryan Sammons of the ball on the left hand side and his cross came to Roberto with time and space in front of goal. The resulting shot rose high over the bar and didn't trouble Richard Wray in the away goal. 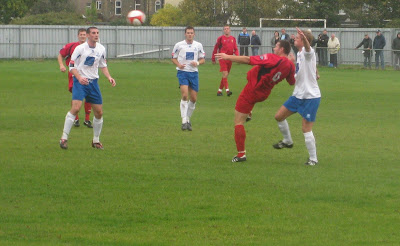 Kye Ruel then made no mistake when left in space at the back his shot went past Rob Blackburne in the Town goal to make it 0-1 to the visitors. East Thurrock then dominated the game, Chris Barry saw his effort from the edge of the box go just past Blackburne's right hand post and from a corner had a handball in the box shout turned down by referee Rob Hodges. This decision angered the Thurrock bench who berated the assistant on their side complaining that he should of seen it. The official replied by stating "How am i meant to see overthere?" as the incident happened on the far side. 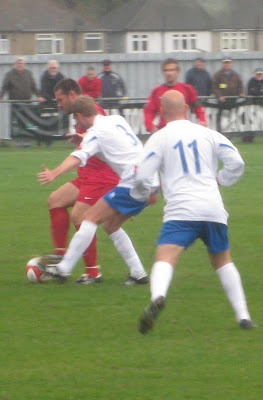 The travelling management didn't have to moan for long as Sam Higgins made it 0-2 when again he found himself in space to stroke the ball past Rob in the Enfield Town goal.

Enfield then came back into the game and Roberto had a shot on target which stung the keeper's hands who pushed the ball over the cross bar. After some good work by Stuart Blackburne (who was having a quiet game by his standards) a cross was put it which Roberto nicked on with his head past the diving Richard Wray, the ball rebounded off the post and it was still 0-2.

The referee blew for half time shortly after and had Roberto's header had gone in it could of been a different match. 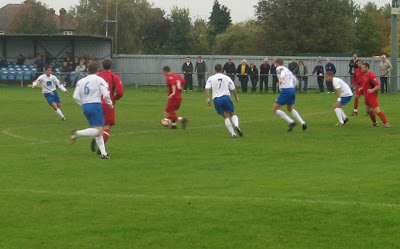 The second half started with Roberto finding himself inside the box with a near enough one on one with the visiting keeper. Roberto took too many touches and fluffed his shot. Fabio had a shot a short while later but nothing seemed to be going right for the Town.

In what appeared to be their first attacking foray of the 2nd half Thurrock made it 0-3 when Kris Newby's mis-kick went somewhat luckily into the path of Sammy Higgins (seemed to have all the time in the world) who only had Rob Blackburne to beat which he did somewhat easily. This goal sparked a muted celebration (almost a polite round of applause) amongst the handful of travelling fans who had congregated to the side at the cold end. 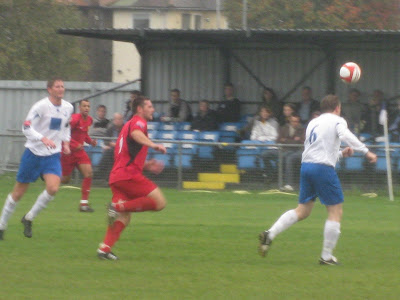 Steve West scored Thurrock's fourth goal when his shot went into the right hand side of the net. 0-4. The game had looked over at 0-2 so it certainly was now!!

The game then petered out into an easy win for ETUFC who now will be one of the favourites for the league. Town were second best giving the ball away too many times to a good East Thurrock side who took their chances well. The word 'drubbing' had been mentioned on the fansfocus forum which the cold end disagrees with. Yes we lost 4-0 to the better side but had Roberto not hit the post just prior to the end of the first half it could of been a different game.

It's very disappointing that in the game of the season so far Town didn't turn up at all especially as Fortress Thames Road was broken when Leyton surprisingly won 2-1 at Concord Rangers(hopefully the same result will occur in the Trophy next week) and Great Wakering Rovers only drew at VCD Athletic.

On the up side we're still up in the right half of the league and apart from this blip look to be in a good position after the games played. It's certainly a better position than last year's 14 point's after 11 games shipping 25 goals in the process.

Steve & Del will know there are areas of the team in need of strengthening and improving which I'm sure will be done in the coming weeks. This was an OFF DAY for a good team which is still up in the play off places. As Steve himself writes in the programme Midfielder/Attacker Denis Maharjan who hasn't played for Town yet is in line to make a come back in the next few weeks.

In summary a miserable day on the pitch and weather wise.....I'm sure Steve, Del and the squad will be drawing a line under it and getting back to winning ways at Northwood on Tuesday.