Not many people will guess the venue for the 1986 Hockey World Cup as Willesden in North West London especially when you read it took place in Bombay, India in 1982 and Lahore in Pakistan in 1990. The former home of Willesden Football Club was the venue for all the competition's matches which was won by Australia who won 2-1 against England in the final. 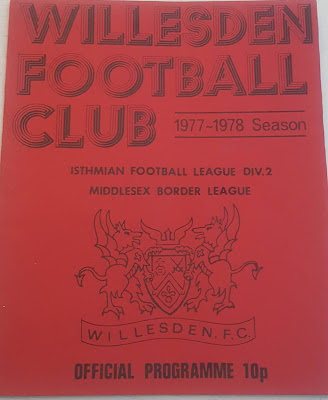 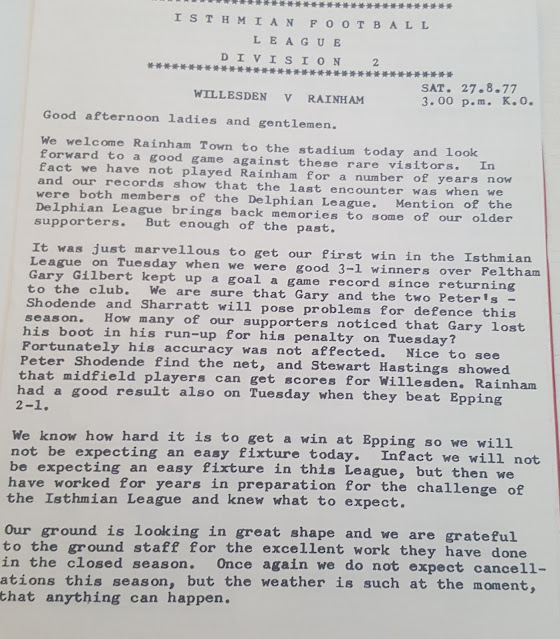 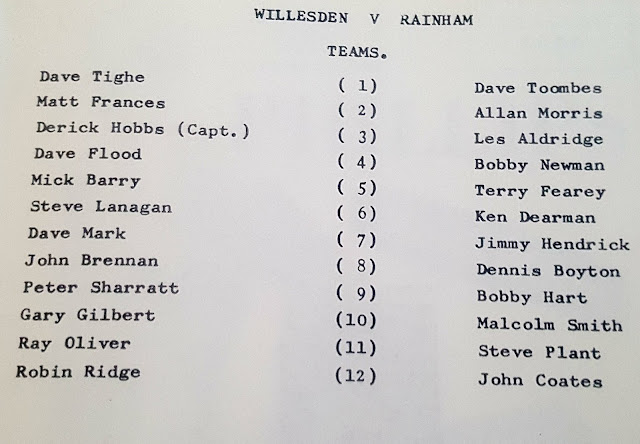 Willesden Football Club had called Donnington Road home but due to a dispute with the local authority over rental payments in the late 1970s, where the council had apparently wanted to increase the annual rent from £150 to over £2000 per year, they had to leave the ground.

They moved across from the Athenian League Division Two where they finished second bottom in 76/77 to the Isthmian League Division Two for the 77/78 season. A number of other clubs moved leagues in the summer including Epsom & Ewell, Letchworth Garden City, Farnborough Town, Cheshunt, Hemel Hempstead Town and Feltham.

The programme featured is from the summer of 1977 when The Floaters with their single 'Float On' had their only number one in the UK Charts and just a few months earlier Liverpool had won their first European Cup against Borussia Monchengladbach in a 3-1 win in Rome.

On Saturday 27th August Rainham Town made the journey West to The Willesden Stadium in Donnington Road, NW10 to play Willesden Football Club for a Isthmian League Division Two game.

The Willesden Sports Centre is still there and was redeveloped in 2006 with a new stand present. I'm not sure if any football team players there at this time.

At the time there were two other clubs representing Willesden - Willesden Constantine and Willesden Hawkeye - Both have very interesting stories behind the names.

Constantine United were formed in 1976 and were founder members of the Middlesex County League - they won the title in 1985, 1996, 1998, 1999 and 2011. Their name refers to the famous West Indian Sir Learie Constantine who moved to England in the 1920s to play cricket for Nelson in Lancashire.

In 1943 the manager of a London hotel refused to accommodate the Constantine family on the grounds of their race - He successfully sued the hotel company and the case is recognised as a milestone in British Racial Equality. He was a major influence in the passing of the 1965 Race Relations Act in Britain and was quite rightly Knighted for his work in 1962.

Ricky Hill, Enoch Showunmi and Junior Agogo had all played played for Constantine before having highly successful football league careers.

Constantine did play at Roe Green Park in nearby Kingsbury in the 1990s but by 2011/12 were playing at the Alperton Sports Ground. The club disbanded when their home unfortunately didn't meet the then step seven standards. Their last game played was a 4-3 defeat to FC Romania on Saturday 26th May 2012 - What happened to them? 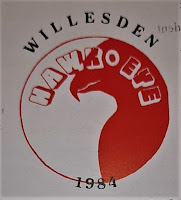 Willesden Hawkeye, founded in 1984 and first played in the Middlesex County League in the 1989/90 season as "Hawkeye Willesden" winning Division One (then the top division in the league) in 1990 and 1991. They only lost one game in the 90/91 season. They did apparently play at Donnington Road up until 1992 but then moved to the West London Stadium now known as The Linford Christie Stadium on the edge of Wormwood Scrubs open space in White City.

The club was formed by Roy Forbes-Allen who also owned the famous Hawkeye Record and Bakery shop in Craven Park Road hence the name Willesden Hawkeye. The club moved up to the London Spartan League Division One after winning the Middlesex County League in 1991. The won the Division One title at the first time of asking and were promoted to the Premier Division which they won in the 93/94 season. The club left the London Spartan League in 1996. Barry Hayles played for Hawkeye prior to his move to Stevenage FC in 1994

Since then the Willesden area has not been represented in Saturday non-league football which is a real shame. It would be fantastic for the name of such a trailblazing and iconic Gentleman as Sir Learie Constantine is represented once again.
If anyone reading this has any memories of Willesden FC, Hawkeye or Constantine please feel free to leave comments below 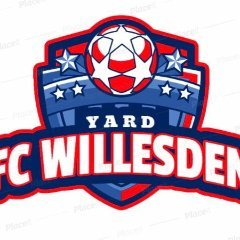 There is a team playing this season in the Middlesex County Sunday League Division Four - FC Willesden have won three, drawn one and lost one of their games played so far. The YARD wording on their logo stands for 'Young Athletes Achieving Dreams'. They currently play their home games at the Shamrock Sports & Social Club in Acton, W3 which is around three miles away from Willesden.
Maybe a Willesden Hawkeye & Constantine could join up to the Middlesex County League in the forthcoming season if their is sufficient interest from the local community.
at 16:40