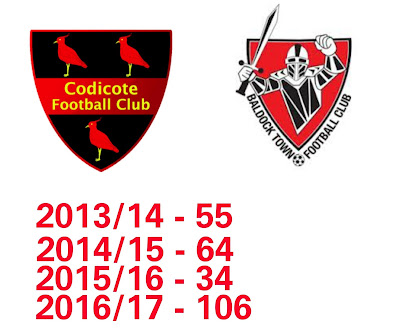 A clear indication of how much of a boost the return of the beautiful game to The John Clements Memorial Ground has been to Codicote FC and the village as a whole is illustrated in the above crowd comparison for their league games versus Baldock Town over the last four seasons. An extra 72 people compared to the game played on Thursday 28th April played at The Gosling Stadium is a huge increase - it was brilliant to see so many people out and enjoying some fresh air and some local derby football on Tuesday afternoon.

Another clear example is that since Codicote moved back home they have had an average crowd of 56 which is a great when you look back at their stay at The Gosling where they regularly attracted attendances in the 20s and 30s.

This game saw title challenger's and third placed Baldock Town face the hosts who are down in sixteenth place of the Spartan South Midlands League Division One.

Codicote's team this season contains a number of promising younger players some of whom have represented Welwyn Garden City in previous seasons. Jack Gajjar, Dan Harper, Jake Hoy, Abel Madima and Reggie Ross all count The Citizens as former clubs. They also had ex Baldock Town goal-keeper Andrew McEuan between the sticks and the ultra-experience Joel Mason in midfield who counts Stotfold, Boreham Wood, Arlesey Town and Biggleswade Town amongst the long list of his former clubs.

It was a fascinating battle he had with the Gregson brothers (Jack and Luke) playing in midfield for the away side. Luke is the player-manager of Baldock who also had Dean Gilbert (player assistant-manager) in their starting XI. The Cold End has seen Jack and Luke play numerous times and I don't think I've ever seen them get along really well when on the pitch - they are two real characters who love a crossword and to argue and bicker but it really seems to work as they both get the job done during the game.

On a really heavy pitch there were some strong challenges put in with a number of bookings handed out that maybe ten or fifteen years ago would of been let go - how the game has changed? 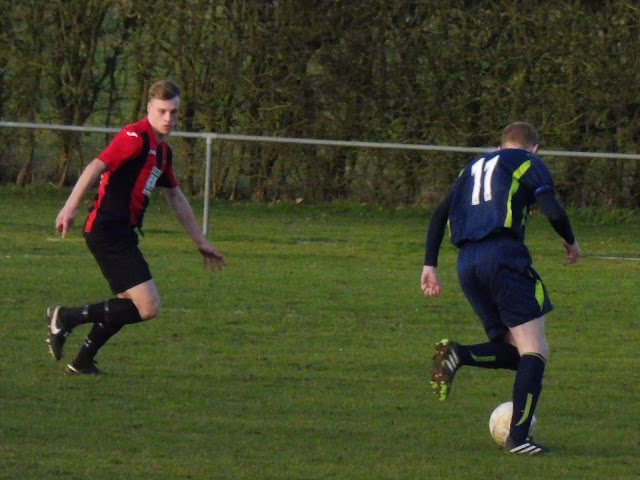 Baldock had the best chances during the first half with the home side battling away but not being able to work the Baldock keeper Daniel Plumb who was deputising for their first choice stopper Jack Farmer who is currently injured.

Baldock's Anthony James rattled the cross bar shortly into the second period with a impressive shot from outside of the box but where then reduced to 10 men when Robert Beckwith was sent off for a second yellow card for a late challenge in his own half.

There was little to chose between the two sides and anyone watching without knowledge of their league positions maybe would of thought there wasn't thirteen places between them. 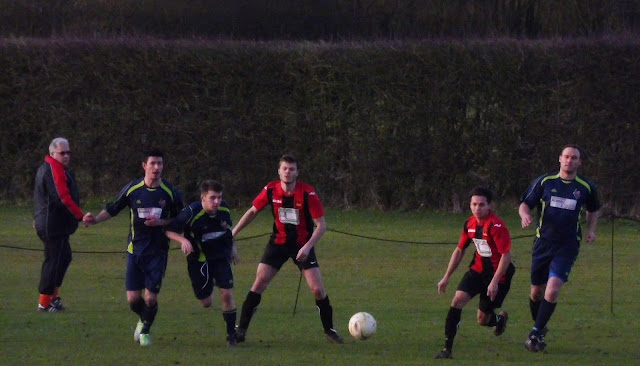 It was Anthony James (known at 'Hamez' to his team mates) who settled things with a free kick just outside the left hand side of the penalty box. The high curling kick looking in from the moment it left his boot - his 32nd goal of an impressive season sent the travelling Red Army behind the goal into raptures and sealed a very important 0-1 win for the title challengers.

Baldock's Red Army comically sang 'My garden shed is bigger than this' during the game - I'm sure their fans would all love to have their own little garden shed in their own town (they are currently ground sharing with Stotfold after spells with Hitchin Town and The County Ground in Letchworth) sometime soon. The club are actively campaigning to find a place they can call home in Baldock which will bring benefit to everyone in the local community.

Their next game is massive and also comes on Monday 2nd January when they entertain fellow title challengers and current table topper's Harpenden Town.

Harpenden Town beat Hatfield Town 5-1 on Tuesday afternoon in front of 51 people at Rothamstead Park. The result of the day in Division One must go to second placed Biggleswade FC who beat fifth placed Langford 8-1 in front an impressive crowd of 165 people at The Carlsberg Stadium.