Enfield Borough are proudly sitting on top of the Spartan South Midlands League Division Two going into the weekend games following a confident performance and 4-0 win at home versus Totternhoe on Wednesday evening. The visitors came to Donkey Lane with a decent league record of seven wins and two defeats in their nine league games played including a 2-1 home win versus The Panthers on the opening day of the season.

The home side took an early lead via 20 year old Solomon Nwabuokei who was impressive throughout the game in an attacking midfield role - He scored a deserved hat-trick and looks a player with a very bright future - Last season he spent time with Cuffley in the Hertfordshire Senior County League Premier Division and has also played for Grays Athletic u21 side.

Credit to Totternhoe who created a number of chances and should of really made the score 1-1 when a header from close range was header over when it looked easier to head into the net.

Borough's Alfie Hatch will remember the game as his free kick to make it 2-0 was a class effort which bent and swerved from way outside of the penalty box giving the Tott's keeper no chance. The half time score was 2-0.

Borough, via Nwabuokei, scored twice more in the second half and could of made it more with two goals ruled out for offside and having a number of other good scoring chances.

Manager Marvin Walker will be very pleased to be top of the table but will be keeping his squad's feet firmly on the ground as they go into their weekend's game away at Mursley United.

On a night when some mindless so called 'fans' at the West Ham United v Chelsea game brought violence inside The London Stadium to the front pages of The National Newspapers it's unfortunate and disappointing that Enfield Borough, just a few miles away, who doing great things at non-league level won't grab any headlines which they and many other clubs full deserve in my opinion.


The below tweet from Sunday 9th October sums up their philosophy on the game we all know and love - which I think brilliantly sums up many clubs at this level of football. 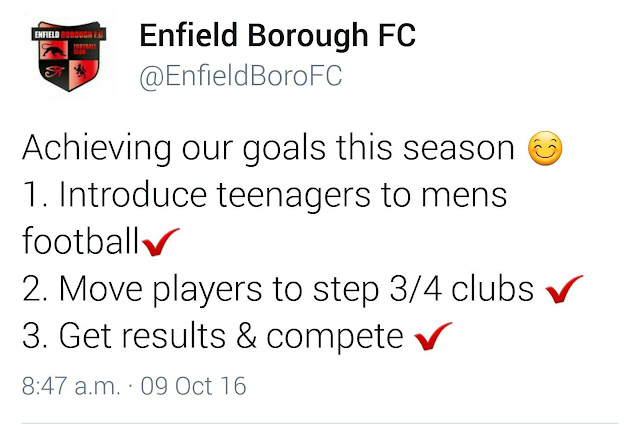 
Looking at the table it's third placed Thame Rangers who will still be considered favourites for the title with four games in hand over the current top two.