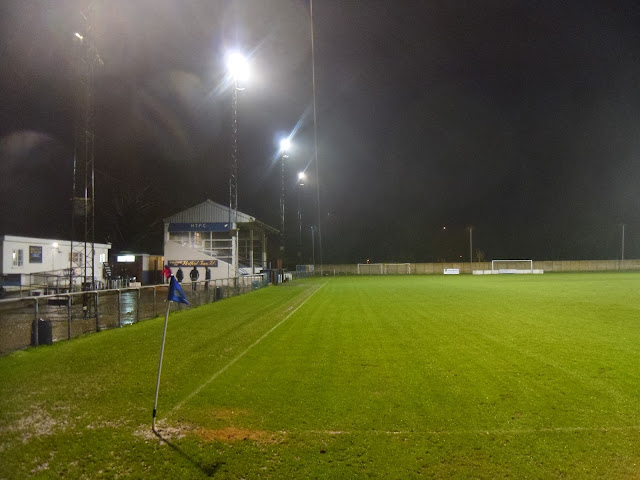 Premier Divsion Hertford Town welcomed Division One Woodford Town to Hertingfordbury Park for a Spartan South Midlands League Cup Round Two clash. The forecast rain had begun to fall at around 6.30pm in the local area and with the Welwyn Garden City v Edgware Town game postponed many of the fans and spectators arriving were surprised to see the game was on with the pitch slightly wet but in a playable condition at kick off. Despite the difficult conditions both sides played some good football with lots of goal-mouth action - Hertford raced in to a 2-0 lead only for Woodford to make an amazing come back to make the score 2-3 at half time. Their second goal from Kamal Miah stood out which was a looping strike from outside of the box. Hertford Town could of scored at least two more goals had they been a little more composed in front of goal  and a great save made by Woodford keeper Robert Fanella. Even Hertford keeper Harry Ricketts nearly scored with a wind assisted kick which was cleared just in time by Fanella.

The rain began to fall heavier during the last 10 minutes of the half and throughout the break putting lots of standing water on the pitch and making it unplayable giving the referee no choice but to abandon the game. The date for the rearranged game has yet to be decided. The nearby game at The Gosling Stadium in Welwyn also ended at half time with Hoddesdon Town 0-2 up against Codicote.

The fact the game went ahead in the first place is tremendous credit to the Hertford town groundsmen Brian Jennings and Col Mason who have, along with a few helping hands, have made the pitch playable and decent- Only a few seasons ago a light sprinkling of rain would of seen many games called off at Hertingfordbury Park. If the league gave awards out for most improved pitch and playing surface it would go to Hertford Town in my opinion.