The Cecil Hudson Cup Final was played on Tuesday evening at Ware's Wodson Park ground. The competition is competed for by the club's of the Reserve and Development divisions in the Hertsavers Senior County League.

Bovingdon Reserves who are fourth in the South and West Division played Buntingford Town Reserves who are third in the North and East Division in front of a decent crowd. Bovingdon had beaten Chipperfield Corinthians Res 4-1, Cuffley Res 4-2 and Evergreen Res 4-1 to get to the final with Buntingford Town beating Old Parmiterians Res 2-0 and Bushey Sports Club Res 2-1. 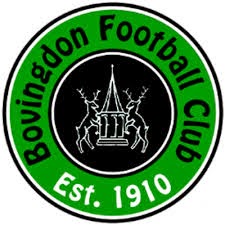 It was a close game but it was Bovingdon who took the cup home on a memorable evening for the club thanks to two goals from man-of-the-match Tommy Gray - both were scored after he pounced on unfortunate mistakes in the Buntingford defence.

MATCH HIGHLIGHTS ARE BELOW
inc all the goals scored and the trophy presentations
where you'll also find out Ware's P.A system is the loudest in local football