MEMORABLE NIGHT FOR RANGERS AS THEY SHOCK HEATH IN CHALLENGE TROPHY 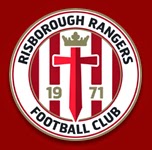 It was ninth place  in the Premier Division versus second place in Division One in the Spartan South Midlands League Challenge Trophy last night at Colney Heath welcomed Risborough Rangers to The Recreation Ground. The programme welcomed the visitors who were 'from miles away in Buckinghamshire' and it the was handful of loyal fans who made the 33 mile trip from Princes Risborough who left the happier after a entertaining ninety minutes during which both teams played some good football on a decent pitch.

Rangers went into the game in good form as their league position suggests. They had won their last four games with Martin Griggs scoring in each of them. Colney Heath had won 8-0 at bottom of the table Ampthill Town on Saturday so were also in a confident mood.

It was the Division One side's night as Martin Griggs (who has also played for Amersham Town and Tring Athletic) scored another two goals alongside Danny Gray (formerly of Aylesbury United and Tring Athletic) who also scored two. Colney's goals came from Ben Awad and Ben Crilley who wouldn't argue that the away side deserved the victory on the night.

MATCH HIGHLIGHTS below
including all the goals scored