Every time these two local rival's meet it's always eventful and the Bank Holiday Monday game was more of the same as Wingate and Finchley ran out 2-3 winner's to record their second successive victory in games played at Enfield Town's Donkey Lane.

Wingate went into the game full of confidence on the back of a great opening to their season winning three of their opening five games with Town suffering an indifferent stuttering sort of start collecting four points from a possible fifteen on offer. 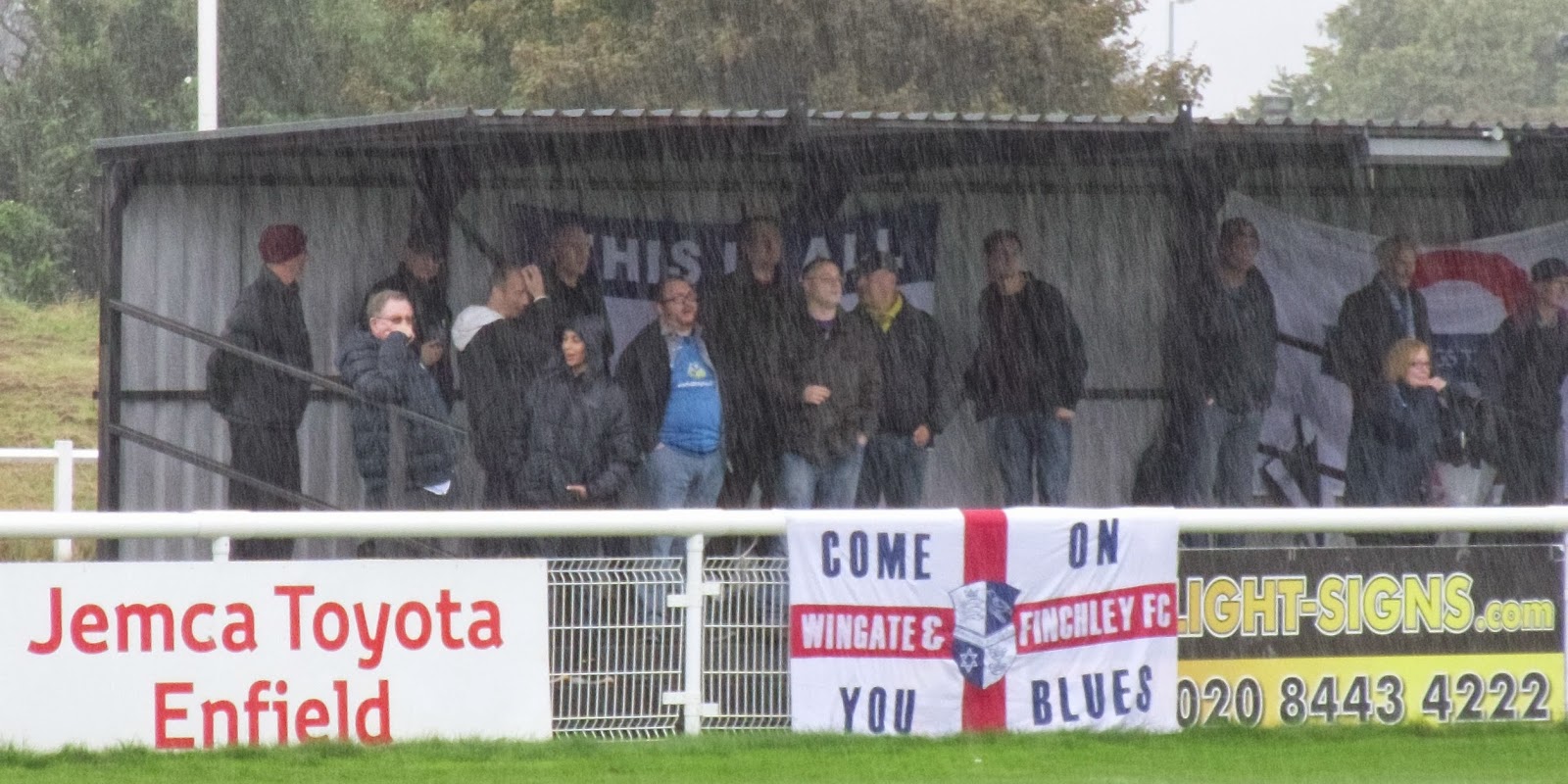 What was very nice is that I had the chance to meet some of the Wingate fans prior to kick off who are a fantastic bunch of loyal fans who clearly love their club and the non-league game. The rivalry is there between the clubs but as with most non-league football clubs we share a drink in the bar before and after talking about the beautiful game. They were obviously very pleased with their start to the season but were gracious in the fact they shouldn't really be in the Ryman Premier after finishing in the relegation places last season but luckily were reprieved from demotion following Worksop Town's decision to drop out of the Northern Premier League. Here is where the sense of realism comes in as they told me they after collecting ten points from their opening five games they are roughly another forty points off of safety and another season at Step 3 of the non-league ladder.

The game was played in gloomy, rainy, horrible and cold conditions - It certainly felt like a British Summer Bank Holiday!

Wingate were amazing in the first half as they totally dominated proceedings looking confident on the ball with Town unable to muster any chances of note. It was a disappointing half of football for the Town fans present as the away side went in at the break 0-3 up and looking like there were odds-on to take all three points away. You have to say Wingate's first goal was fantastic as Karl Oliyide collected the ball just inside Town's half and danced around three or four challenges running at the Town back line - swapping a one-two and then placing a controlled shot into the net to the delight of the away support.

Wingate went 2-0 up when James Kaloczi's found himself in space at the edge of the box and was able to shoot past Nathan McDonald. It was 3-0 just prior to half time when Rob Laney was able to score following some good work on the left from David Knight who has been in great form for Wingate in the opening games of the season.

Town certainly needed a reaction in the second half and it was a case of so near but yet so far as a tremendous and fully committed fight back saw Neil Cousin's score his first and second goals for the club and Phil Kane's shot late on well saved by Bobby Smith in the away goal.

It could of been 2-4 very late on as Wingate broke up field and Ahmet Rifat (a veteran of the Wingate/Enfield derby games) found himself unmarked with an open goal in front of him. How he missed the goal only he will know as the ball  zipped past the post right in front of the away support..some of whom must of already been celebrating a fourth goal!

Wingate were reduced to ten men shortly after when central defender Kieron Street was red carded for a two footed challenge.

Wingate's small army of fans danced in the rain when the full time whistle blew celebrating a famous victory and the winning of local bragging rights. For Town fans it was a day of mixed feelings - the poor performance in the first half was contrasted with their team showing some much needed desire and passion with a spirited fight back in the second half which will give the team and management a real boost for another tough local derby away against Hendon on Saturday.