FCBB WIN THE TOP OF THE TABLE CLASH IN IMPRESSIVE STYLE 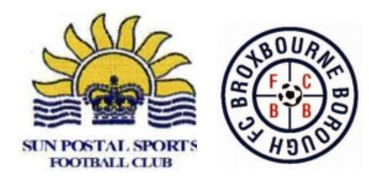 A real top of the table clash took place on Tuesday night at Bellmount wood Avenue as Sun Postal Sports hosted FC Broxbourne Borough in the Spartan South Midlands League Division One. Both teams have new managers, players and committee members for the 2013/14 campaign with their records showing (although it's early days in the league table) that they both could be involved in the promotion race at the end of the season.

Sun Postal have appointed ex Kings Langley boss Paul Hobbs with FC Broxbourne Borough (renamed from Broxbourne Borough over the summer) bringing in Kem Kemal who managed the ultra-successful Herts County League side Aslan FC last season. Kemal has brought with him the spine of that team and Tolga Huseyin has also joined as Director of Football. He was previously boss at Bush Hill Rangers/Goffs Oak FC.

It was The Cold End's first visit to Sun Postal Sports which is located in the Cassiobury district of Watford. The bar/clubhouse is really good with a large beer garden which could even be considered a continental patio for long term readers of TCE. The ground is basic but with lots of room to improve should they wish to do so. The pitch is fully railed with dugouts on one side and a small covered seated stand on the other. 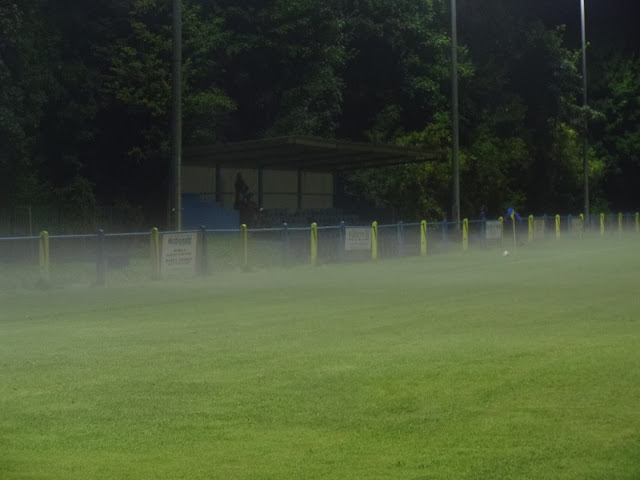 The match was a really entertaining one with lots of incidents and some really brilliant goals scored. I say it lots of times during the season but if at least two of the goals scored would have been by a Premier League player they'd be replayed all around the world over and over (see from 0m 55s and 7m 31s) There are over 20mins+ of highlights below with, aside form the goals, the two main talking points being -

1. Sun Postal Sports surely should of had a penalty-kick here (see from 5m 45s)
2. Max Moore (of Sun Postal) was sent off for what the referee thought was two yellow card offences. As you'll see from the footage he felt quite aggrieved at being dismissed. Have a look and see what you think?? I think the referee got it right as studs were up in both challenges. Although they were not malicious they were dangerous in my book.  (see from 4m 50s and 13m 35s)

FCBB played some really decent football and retained possession well on a good pitch against a side who had their chances but it the second half lost their heads slightly, got frustrated and seemed to blame the referee for almost everything that went wrong. As stated it's early days but it will take a very very good team to finish above FCBB should they continue to play this well and keep all their current players some of whom are well capable of playing at Step three of the non-league ladder and maybe higher.

For Enfield Town fans reading this two of FCBB'S goals came from Neil Hughes and Volkan Calcalioglu who are both ex Towners. TCE was well impressed with midfielder Tidjane Dabo Carvalho for FCBB who played just in front of the back four. Not only does he do what the pundits call the "dirty work" in this position protecting the defenders he also can pick a pass and looked comfortable on the ball. He is a name to look out for by other clubs who he will face this season.

Division One of the Spartan South Midlands League where only the top two are guaranteed promotion is shaping up to be really interesting compeitition this season. A full round up and update on all three SSMFL divisions will follow soon.

OVER TWENTY MINUTES OF EXCLUSIVE MATCH HIGHLIGHTS ARE BELOW