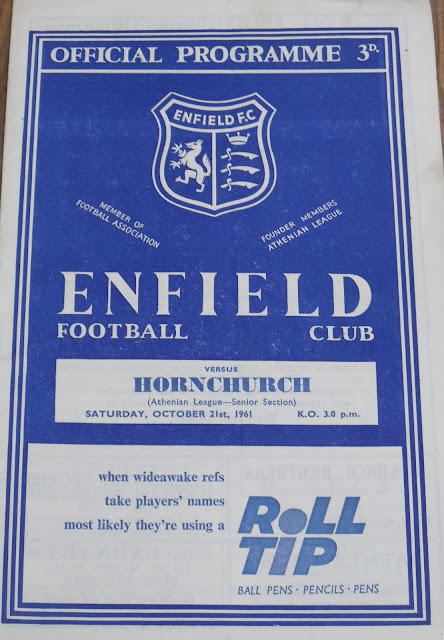 Saturday 21st October 1961 saw Hornchuch visit Southbury Road for an Athenian League senior section fixture. The E's had started the league with a 100% record of eight wins in eight and were top of the table but by only two points from local rival's Barnet who had won six and drawn two of their games. The Urchins were in seventh place winning 2, drawing 4 and losing 2 of their eight games. The Athenian League of 1961/62 contained some really big non-league names with Enfield, Barnet, Wealdstone, Hayes, Hendon and Sutton United all included. 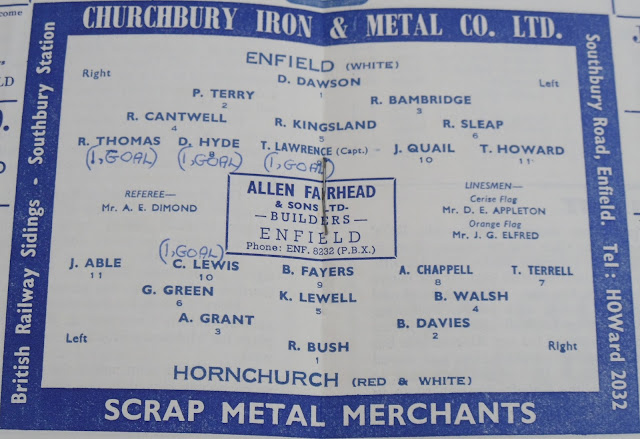 The club notes state "our first defeat of the season, registered by Barnet a fortnight ago, terminated our dreams of a long FA Cup run. We would like to put on record, however, how much we enjoyed the talented and match-winning football displayed by our senior team in providing an opening to the season of fourteen successive victories."

The notes also state "Our best wishes go to young Terry McQuade, a promising winger, who had signed professional formed for Millwall." McQuade, born in Central London, went on to make 37 appearances for The Lions in two spells as well as 20 appearances for Queens Park Rangers. He also played for Dover FC and in South Africa for Addington and Durban City.

The game was won 3-1 by The E's with goals from Thomas, Hyde and Lawrence with Hornchurch's goal coming from Lewis. Roy Thomas is the featured player in the programme who was born in the Rhonda Valley. He played football for Enfield Schoolboys but as a youngster preferred boxing as a sport. He spent sometime in the Army before joining Cheshunt and then Enfield in 1956 when he played as a centre-forward. He moved onto Hendon where he converted to play on the right wing before moving back to The E's. He went back to Hendon before re-joining Enfield once again for his third spell in August 1959.

One brilliant note from the Supporter's Club section mentions "The Enfield Roar" which was a "real booster' for the players. Hopefully this is something the newly formed Enfield Town Ultras can being back for the Ryman Premier League season in 2013/14.