VICTORY LIFTS TOWN FURTHER AWAY FROM THE DROP ZONE

Enfield Town's hard fought 1-0 victory over Leiston at Donkey Lane on Bank Holiday Monday means there is now a comfortable twelve point gap between fifteenth place (where Town are) and the drop zone in the Ryman Premier. Many of the teams below have games in hand but TheColdEnd is a great advocate of points in the bag are much better especially at this time of the season.

It wasn't the best of games to watch with a strong wind blowing throughout the ninety minutes on a pitch that has been sanded in places following the snow and wet weather of late. The surface is still much better than some of the football league clubs I have seen so credit must go to Town groundsman Jack Lucas for the amazing job he has done this season.

Leiston looked good going forward with Tom Winter (number 11) on the left and ex Waltham Abbey, Harlow Town and Brentwood Town forward Emmanuel Osei (number 9) impressing. Youngster Winter is currently on loan from Championship side Ipswich Town and this was his first start for the Suffolk side. He came on as substitute on Saturday versus Lowestoft Town and looks a real prospect from this performance.

Osei was put through on goal by Winter in the fifth minute but the ball got stuck under his feet and Noel Imber was able to casually collect the ball.

﻿
The game had some controversy after Mark Kirby had headed on a Jonathan Hunt corner for Liam Hope to knock the ball into the net to make it 1-0. Kirb's claimed the goal and it was originally given to him but on the official club team sheet submitted the goal is listed as scored by Liam Hope. 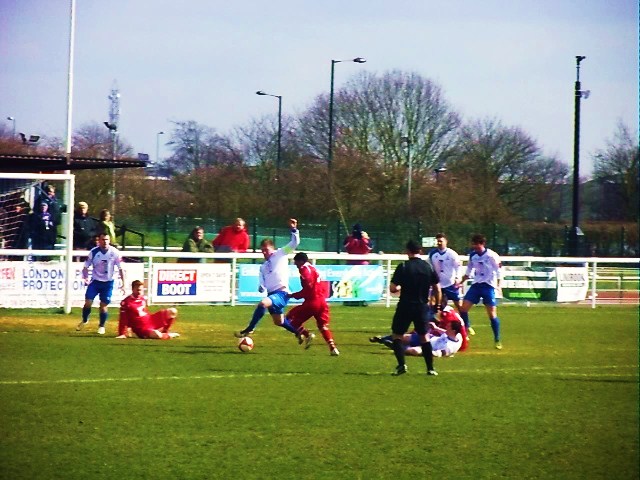 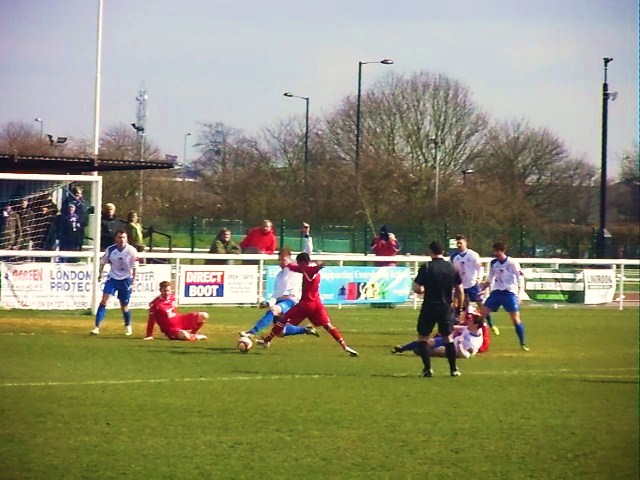 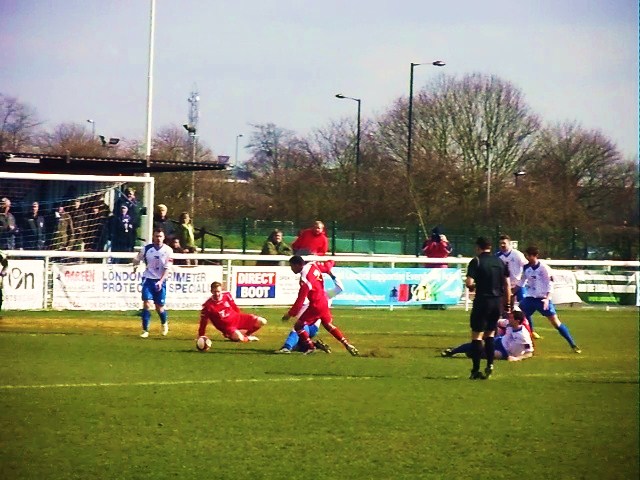 Town's captain was involved at the other end when he put a challenge in on Rhys Henry in the box who fell to the floor. Referee Wade Norcott was right up with play and had a brilliant view of the incident blew up and booked Henry for simulation/diving. See the video at 3m 49secs to make your mind up?

The next incident was when from another Hunt corner the Leiston player cleared the ball right on the line/over the line (most people behind the goal with a much better view said it was over)...see from 4m 36secs for the incident on the video.

In the second half Town defended well with the busy Lee Allen in midfield rightly being awarded man of the match. Hunt had a really good chance to make it 2-0 but put the ball over the bar.

Town's next game is at Hampton and Richmond Borough on Thursday night whom parted company with their manager Mark Harper today following their loss at Carshalton Athletic on Monday.

Yesterday's result was the same scoreline with the same scorer (if Liam is given the goal?) as the result between the two sides in the Ryman Division One (North) last season on the 21st April 2012. Both clubs will be satisfied in their achievements in their first season at Ryman Premier level and will hopefully look to build further for next season. The relegation race is certainly not over yet so Town will concentrate on confirming safety first.