It was an interesting clash of styles at Coles Park on Monday night as Haringey and Waltham Development who love to pass the ball and build up play from the back welcomed the more direct and hard working Clapton for an Essex Senior League game.  The official attendance was given as 16 people whom opted for some live football and not the Manchester derby on television.

Both sides are languishing near the bottom of the table in the ESL with HAWD in 14th place and Clapton in 18th place of a nineteen team league. Going into the game The Tons had only won 2 of their 29 league games (against bottom side Bowers and Pitsea at their Old Spotted Dog ground and at Bethnal Green United 2-3) but had had their best result of the season in a 3-3 draw at table topper's Burnham Ramblers. HAWD were on a eight game run without a victory with their last win coming against Bowers and Pitsea on the 27th February.

Clapton were winning at half time thanks to a scrappy looking goal after the home keeper had been unable to keep hold of a long and high free kick into the box. On the rare occasion HAWD went long ball they scored via an impressive lob from the edge of the box and won the game late on with another untidy looking goal (but they all count) which the HAWD manager had a really good view of as he had been sent from the dugout for swearing at the referee whilst kicking a bag over which was all over a disputed throw-in. This prompted a member of the crowd to advise the referee with some words of wisdom "get on with it ref...you f****** knob"...why not stop shouting stupid stuff like that? If you are going to haggle the referee try and think of something original and maybe a little humorous!

MATCH HIGHLIGHTS are below

Clapton's last home game of the season comes on Thursday 25th April when Hullbridge Sports visit The Old Spotted Dog. The Friends of Clapton are mounting a campaign for local people to attend and make the crowd 100+ which would be great to see. They also play at 'home' on Monday 15th April when Eaton Manor are the opponents in a game switched from Capershotts due to the ongoing problems with the playing surface at Waltham Abbey's ground. 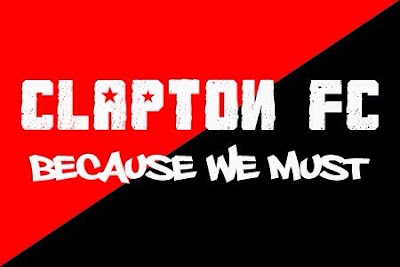 Haringey and Waltham Development have six home games left to play in the next few weeks following the problems with the playing surface at Coles Park during the season. They play Sawbridgeworth Town this Saturday, Barkingside next Monday, Hullbridge Sports next Wednesday then London APSA on Wednesday 24th April, London Bari on Saturday 4th May and finally Bethnal Green United on Monday 6th May.