DOG ON THE PITCH & THE GREATEST FREE KICK TAKEN EVER*

*unconfirmed but possibly maybe the best 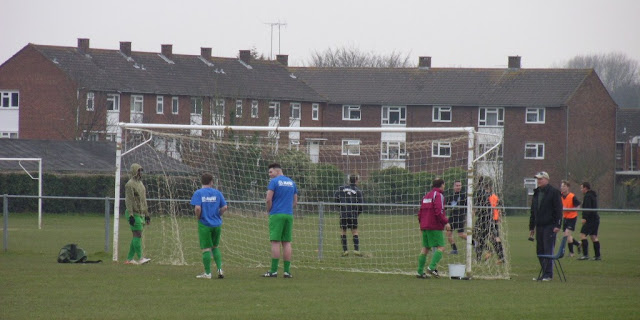 AFC Hatfield welcomed local rival's Lemsford to their Birchwood Leisure Centre home for a Hertfordshire Senior County Division One game on Wednesday night that was officially due to kick off at 6.15pm. However, when I arrived I was greeted by the friendly programme salesperson and club man who informed me the referee was late and that the game would kick off late. With it due to start getting dark at around 7.45pm they would have to get a move on or the game couldn't of taken place.

The game kicked off just prior to 6.30pm with the referee playing 40 minutes in the first half and 39 minutes in the second half with the last 5 to 10 minutes played with visibility fading in dusky darkness. The half time break lasted around two minutes! The game ended at 7.55pm.

Lemsford raced into a 2-0 lead with their first goal coming after only 30 seconds. AFC Hatfield really struggled to keep the Lemmy keeper busy throughout the first half with lots of misplaced passes but to their credit fought back to make it 2-2 and even scored a disputed offside goal. As soon as it was 2-2 Lemsford broke up field and made it 2-3 almost immediately.

There must be something to do with Birchwood and animals on the pitch as on a previous visit (versus Whitwell in April 2012 - see here ) a dog ran on and helped them out defending. This time a friendly Alsatian joined in during the second half. Definitely proper football! See from 3mins 30secs on the video.

What about the greatest free kick ever taken I here you ask? Have a look at the video from 2mins 57secs and you'll see AFC try and recreate the famous Coventry City free kick from the 1970's which was featured on the credits of Match of the Day.

AFC Hatfield produce a good programme which is really good to see at this level of football and although it's just a railed pitch it's worth a visit.