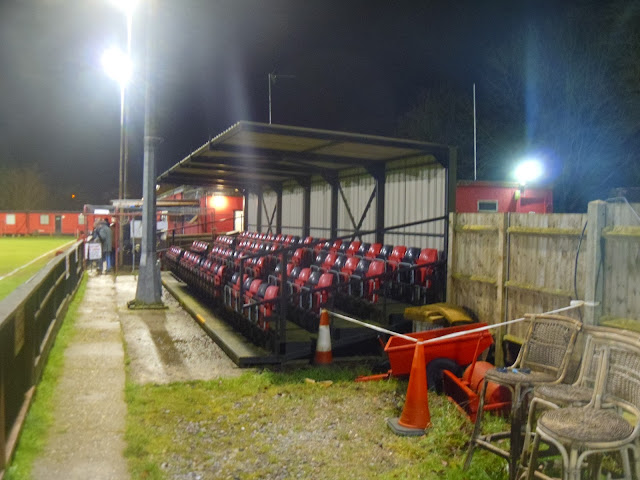 ﻿﻿
The Tons of East London made the trip to Crofters End, Sawbridgeworth on Tuesday night for a re-arranged Essex Senior League game. The original game had been abandoned at half time on Saturday 24th November with Sawbo 3-0 up.

This was a entertaining game and it had the right result as both sides worked hard and gave it a good effort on the night. It was great to see Clapton record only their third point on the road in the league this season. They have also drawn at Barkingside and against London Bari who currently ground share at The Old Spotted Dog.

There were some good players on show with Sawbridgeworth's George Wappett (number 11 playing on the left wing but all right foot) causing the away defence lots of problems and scoring a great goal in the second half. Wappett, who has also been on the books of Bishops Stortford, nearly won the game right on 90 minutes but was denied by Ton's keeper Paul Daley. He seems to have been around for ever having played in the ESL against Enfield Town in the early 2000's. He was on good form last night........ "ref, I'm not moaning but have a look at that...I'm not moaning I'm just saying that's all" along with asking the Assistant Referee "How long mate"?" every five minutes in the second half. He is a real character and what non-league football is all about.

Clapton's centre back Hussain Jaffa (number 6) also stood out for me. He was impressive and dominating in the air against the Sawbo attack with his height and athleticism a clear advantage. Apparently he usually plays left back and showed he can also go forward having a hand in The Ton's second goal. He is only in his early 20's and I think with the right attitude could also play at a higher level of the game. He is listed on The Ton's website as Hussainou Jaffa.

Danny Aggio (number 8), in centre of midfield, was also busy and showed a good touch. Watching the game I thought he reminded me somewhat of Scott Parker. I must of been right as on the claptonfc.com website it says he bases his game on the Tottenham player. He has also played at Brentwood Town, Ilford and Basildon United.

An extended fifteen minutes+ of match highlights are below including all four goals scored.

I recommend a visit to the Friends of Clapton FC website which is an organisation set up to help the club who have been struggling to survive over the last few years. With so many East London based teams and grounds going bust and disappearing in the recent past the club needs more local support so if you live in the area why not go and watch a game?

To quote the Friends of Clapton -

"The primary objectives of the Friends of Clapton FC is to help those who run, administer and play for the Tons. These objectives include it's continuance and well-being, the security of tenure at the Old Spotted Dog Ground and to promote Clapton FC's activities in an open and forthright manner so as to re-establish the club in the world of football as well as the local community. This will inlcude the careful consideration of where the club is going and to offer advice, help and support where necessary.

We believe that Clapton FC is a club deserving of support and who's survival is important, not only to the local area, but also to the sport of association football, the development of which, owes much to the Clapton players, officials and supporters of yesteryear."

TheColdEnd also saw filmed the Clapton v Sawbo game at The Old Spotted Dog on Tuesday 18th October 2011. Highlights of this nine-goal game are below. George Wappett was number 17 in green in this game and also stood out as a decent player then -