TOWN'S CUP DREAM OVER FOR ANOTHER YEAR

For a few moments after Tyler Campbell's superb opening goal the FA Cup dream was on for The Town but after 90 minutes it was Bishops Stortford who left Donkey Lane victorious with their hero being centre forward Ricky Sappleton who bagged a hat-trick. Sappleton, nicknamed the beast by the blue's fans, was a complete handful all through the game using his large build and strength to dominate the Town defence. The away fans sang 'feed the beast and he will score' several times yesterday.

A positive to come from the game for Town was Troy Archer (whom has been banging in the goals for Enfield Town reserves) making his debut for the first team when he replaced Liam Hope for the last twenty minutes or so. Town also passed the ball well at times but failed to work Stortford keeper Jorg Stadelmann, who was making his debut for The Blues, having been recently signed as cover for suspended Luke Chambers and injured Ross Kitteridge.

Many of the starting XI for the blues have football league and Conference Premier experience -Anthony Sinclair-Furlonge (currently on loan from league one Stevenage FC), Johnny Herd (42 apps for Southend United), Matt Johnson (46 apps for Rushden and Diamonds in 2010/11), Jesse Waller-Lassen (released from Spurs academy during the summer), Ricky Sappleton (started career with QPR and moved to Leicester City and Macclesfield Town where he made 29 apps scoring 8 times in the football league...in 2007 he was linked with Liverpool and Manchester United having a trial at Anfield) and Lewwis Spence (football league appearances for Wycombe Wanderers and Crystal Palace). There was also a familiar name to Town fans in Steve Cawley who captained Ryman Division One (North) Waltham Abbey last season and was in the division's team of the year. 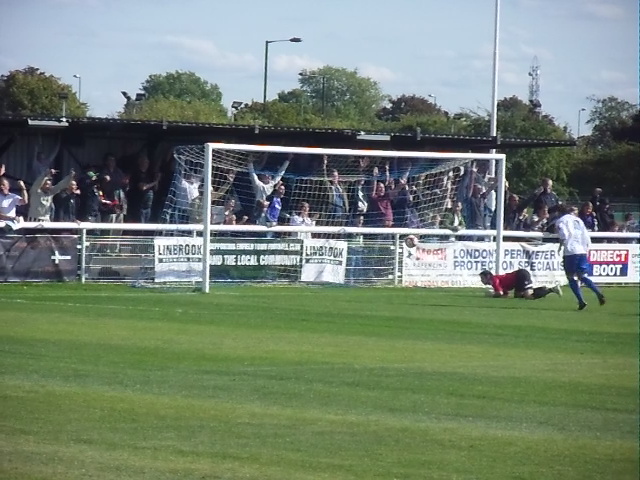 In summary for Enfield Town it's no shame to lose to Bishops Stortford whom on this showing will finish well in the top half of the Blue Square North division.

TheColdEnd doesn't think we'll see many better centre-forwards/strikers than The Beast at Donkey Lane this season. At only 22 years old the former Jamacian under 20 international may well still make the step back up to the football league if he continues to hit the back of the net for the blues this season. You can follow him on twitter @sapps10

﻿
MATCH HIGHLIGHTS ARE BELOW
inc all five goals scored....look out for Tyler Campbell's finish which maybe a goal of the season contender

It's now thirteen seasons since a team representing Enfield have reached the First Round proper of the FA Cup when Jim Chandler's famous E's team beat Chesterfield at Saltergate and drew 0-0 at Deepdale against Preston North End (in front of 11,566) before losing the replay (at St Albans City's Clarence Park) 1-3 to the Lancashire side then managed by now Everton boss David Moyes.

As a Town fan said to me after the game yesterday 'there is always next year'.