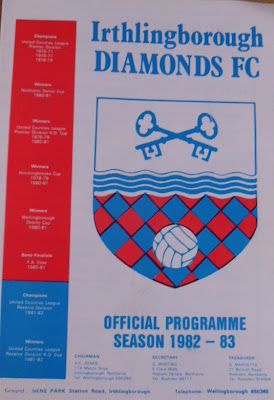 Back in 1983 which Irthlingborough Diamonds or Rushden Town fan would of thought that the two Northamptonshire rivals would of merged and gone on to be promoted to the football league??

The joining together wasn't to happen for just under a decade when Irthlingborough welcomed Alliance Premier League Stafford Rangers to the then Nene Park for a Midland Floodlit Cup game on Tuesday 11th January 1983.

Also in the United Counties League at the time were Stevenage Borough who, of course, also went through the divisions to join the football league in 2010.

The programme welcomes Stafford Rangers to Nene Park and went into details of the FA Vase encounters the diamonds had just had against Stamford. They were described as 'hardly classics' but 'typically tough cup ties fought out between great rivals'.

It also details a victory over Rushden Town in the County Cup where goals from Roger Ashby and Neil Redding to set up a short journey to Rockingham Road to play Kettering Town.

There is a whole page dedicated to The Midland Floodlit Cup which states it was Irthlingborough's first ever season in the prestigious competition.

The interesting bit is the table which shows Nuneation Borough on top with 44 points from just 5 games. Yes, you've read it right FORTY-FOUR points!

The Midland Floodlit Cup had seven teams entered who were Nuneaton Borough, Bedworth United, Kettering Town, AP Leamington and Redditch United along with the two teams in this game.

The programme states 'each team plays 3 home and 3 away matches and 10 points are awarded for a win, five for a draw and one point for each goal scored. A good win then can see a dramtic rise in the table - Nuneaton recently took 19 points from their 9-0 rout of Redditch. When the qualifying matches have been completed the two top sides play off, at home and away, to decide the destination of the cup.'

There are two pages dedicated to Stafford Rangers which details that Roger Ashby (an Irthlingbourough player at the time) was a member of the Kettering Town side whom Stafford Rangers beat 2-0 in the 1979 FA Trophy final. Ashby went on to manage Irthlingborough Diamonds, Rushden Town, Rushden and Diamonds, Bedford Town, Grantham Town, Nuneaton Borough and Brackley Town as well as being Assistant Manager at Kettering Town and Solihull Moors.

The Diamonds were knocked out in the next round of the Vase versus VS Rugby at home where they lost 1-2 after the original game which was also won (0-1) by VS was ordered to be replayed. VS Rugby went onto to lift the Vase at Wembley. Irlingbourgh were Vase specialists at the time and went so close to Wembley in 1981 and 1984 when they reached the semi-final.

In the UCL round-up it states 'At Stevenage, manager Derek Montgomery and his assistant Paul Peterson have quit Broadhall Way after a series of poor results. The decision was made after the manager selected himself for the team for the match against Newport Pagnell, which Stevenage lost 1-4' - HOW TIMES CHANGE AT STEVENAGE!!! 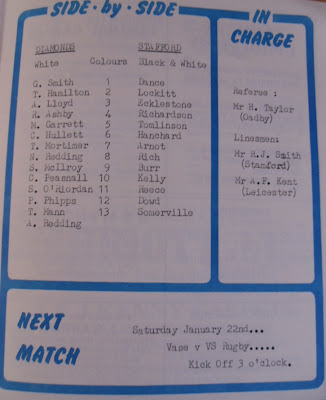 Following Rushden and Diamonds being expelled from the Conference at the end of the 2010/11 season and subsequently the club entering administration in July 2011 a new club was formed called 'AFC RUSHDEN & DIAMONDS' whom competed in the Northamptonshire Senior Youth League for the 2011/12 season.

For 2012/13 AFC will play in the United Counties League Division One (Step 6 of the Non-League pyramid) playing their home games at Wellingborough Town's Dog and Duck Ground. They will play (amongst others) Bourne Town, Potton United, Wootton Blue Cross, Buckingham Town and Eynesbury Rovers whom both Rushden Tow and Irthlingborough played in the UCL Premier Divison in 1982/83.

They will also face a local derby against Rushden and Higham United whom play at Rushden Town's old ground at Hayden Road. They were formed in 2007 following a merger of Higham Town (then of the United Counties League Division One) and youth football team Rushden Rangers whom had played at Hayden Road from 1995. 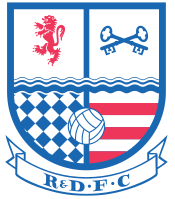 The United Counties League has, as you can see from above, announced it's constitutions for 2012/13 and they are as follows -

Divison One has a really local feel to it with AFC Rushden & Diamonds, Bugbrooke St Michaels, Burton Park Wanderers (based in Burton Latimer North of Wellingborough), The three Northampton clubs (ON Chenecks, Sileby Rangers & Spencer), Raunds Town,  Rushden & Higham, Rothwell Corinthians, Thrapston Town and Wellingborough Whitworth all being close to each other. This should make it a really competative division.