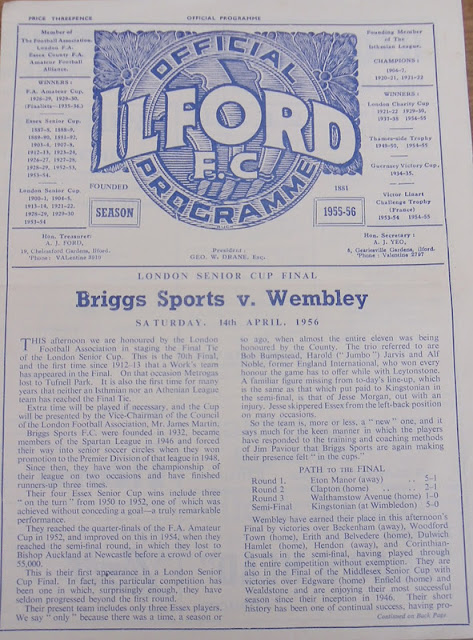 Redbridge FC have hit the FA Cup headlines this weekend and it's a club who are a part of The Motormen's history that feature in today's classic programme.

Briggs Sports were formed in 1932 as Briggs Motor Bodies FC and it 1959 merged with Ford Sports (Dagenham) to form Ford United who in turn in 2004 were renamed as Redbridge FC.

In 1954 Briggs reached the Semi-Final of the FA Amateur Cup only to lose 1-5 to the mighty Bishop Auckland at Newcastle United's St James Park in front of a crowd of 55,000.

This programme is from 55 years ago as on Saturday 14th April 1956 Briggs took on Wembley in the final of the London Senior Cup played at Ilford FC's old ground in Lynn Road, Newbury Park. 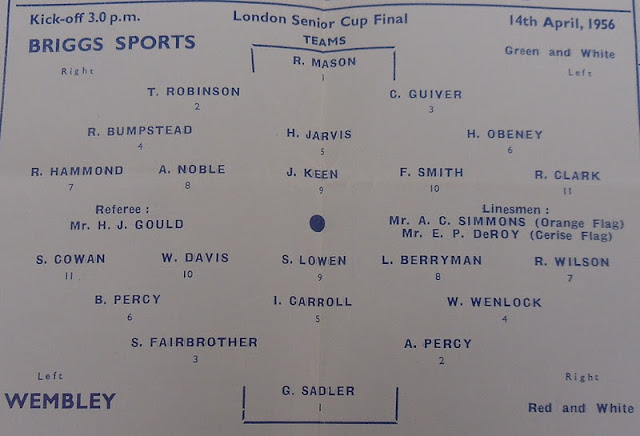 The programme notes start with stating that this game was the 70th final played and was the first time a work's team (being Briggs Sports) had appeared in the final since 1912/13 when Metrogas lost to Tufnell Park. It was also the first final for many a years that neither an Isthmian nor an Athenian League team had reached the final.

The history of Briggs Sports is covered in that the team entered the Spartan League in 1946 and 'forced their way into senior soccer circles when they won promotion to the Premier Division in 1948'.
Up to 1956 Briggs won the Championship twice and were runners-up on three occasions.

The game was the first time Briggs had appeared in the final of the London Senior Cup and that they had seldom progressed past the first round in previous competitions.

The programme states that their team 'includes only three Essex players. We say only because there was time, a season or so ago, when almost the entire eleven was being honoured by the County. The trio referred to are Bob Bumpstead, Harold "Jumbo" Jarvis and Alf Noble, former England International, who won every honour the game was to offer while with Leytonstone'.


The programme doesn't contain the scores for the Wembley games but does state that the Wembley played through the competition without exemption and  that they were also in the final of the Middlesex Senior Cup with home victories over Edgware and Enfield along with an away win at Wealdstone. 1955/56 was Wembley's most successful season since their inception in 1946. They had only lost four Delphian League games for the season to date.

The programme continues 'Their team normally includes Dennis Haskow at outside-right, but have played through the competition without his services due to one appearance with Winchmore Hill at the beginning of the season, and Roy Wilson, a 19 year old reserve, has proved an able deputy'. Wembley's team also included 'Tony Carroll, a local lad who played in Wembley's first ever game in 1946'. Jim Price was the manager who 'over the part four seasons has built a formidable team' and coached by Charlie Baker 'who played 14 seasons at Wealdstone'. 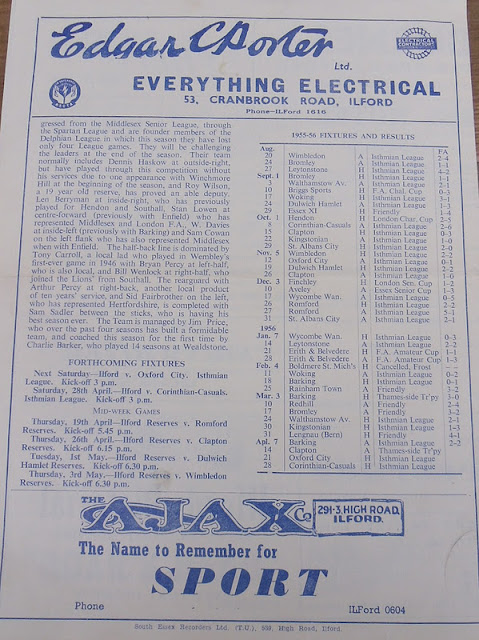 Briggs Sports won the game 3-1 to lift the trophy for the first time and in 1957 lifted the trophy again beating Corinthian Casuals 3-0. Ford United had to wait until 1998 when they reached the final and beat Southall 2-0 and then won the trophy again in 2001 when Croydon Athletic were beaten 3-2. They lost the 2003 final to Bromley who recorded a 1-0 win.

The London Senior Cup for 2011/12 is now well underway at the third and fourth round stages.