The programme we look at today is nearly sixty years old as on Saturday 1st December 1951 Leyton (then of the Athenian League) entertained Eton Manor in a FA Amateur Cup 3rd Qualifying Round tie. The club notes state "to the officials, players and supporters of Eton Manor we again give a warm welcome with the hope that the elements are kinder to us today, than when the referee abandoned the game at the interval, when we were then leading 1-0". The abandoned game was played two weeks prior to which the Supporter's Club Notes stated 'it would of occasioned no surprise if the Manor had emerged from the dressing rooms singing the 'Eton Boating Song!" which suggests it must of been raining somewhat. The notes go on "It was a great pleasure to see so many supporters present in spite of the vile Weather" 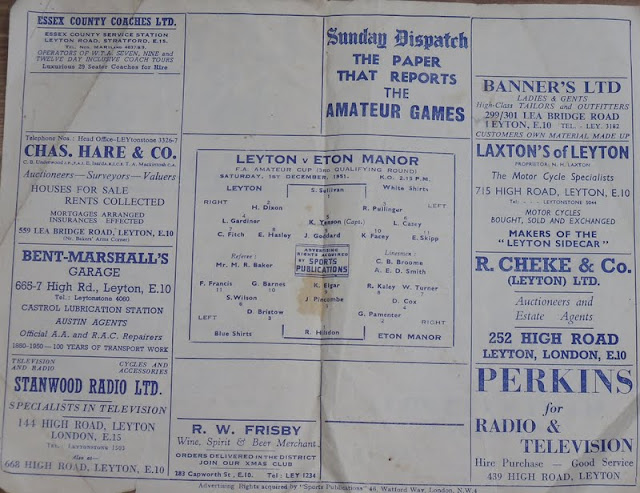 There are also details about The Lilywhites FA Cup 1st Round Proper game away at Chippenham Town which was won 0-3. The Wiltshire side are described as a 'physically strong team' but late goals from Ken Facey and Len Casey settled things. Leyton had already beaten Cheshunt in the First Qualifying Round of the FA Cup and then a trio of local clubs - Eton Manor, Woodford Town and Walthamstow Avenue to play Chippenham Town, then of the Western League. They went on to travel to Chester (of Division Three North) who beat them 5-2 before earning a 2-2 draw away at Chelsea. The replay was won by the West London side 2-3. Chelsea were then in the Football League First Division and went on to the Semi-Final where Arsenal beat them. 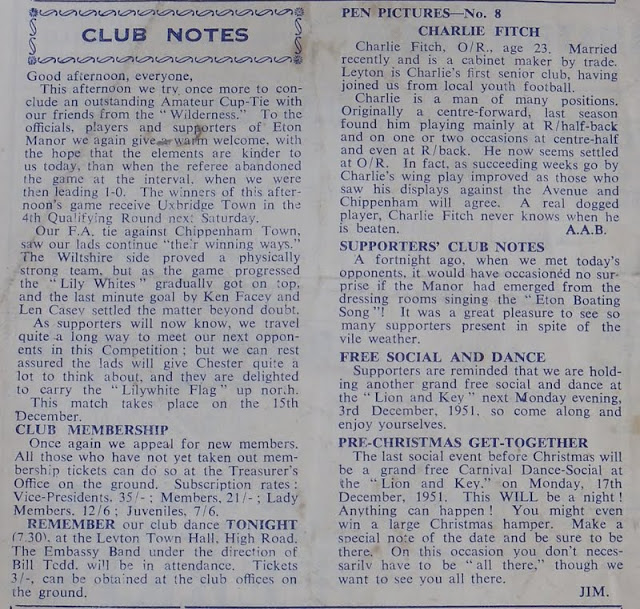 'Tonight's the night!' proclaimed the the advert on the front page as it was the club's dance night at The Leyton Town Hall. "The Embassy Band under the direction of Bill Tedd will be in attendance" the programme details on the back.

The history of Leyton FC and football in the local area is somewhat of a complex matter over the last few decades. Enfield Town fans know that they became rivals of ours in the Essex Senior League and Ryman League up until their withdrawal last season. Here is a time-line of events which will hopefully explain the situation to those not in the know -

1868 - Leyton FC formed
1927 - Leyton FC beat Barking Town at The Den to win the FA Amateur Cup for the first time
1928 - Leyton FC win the FA Amateur Cup again beating Cockfield 3-2 at Ayresome Park
1934 - Runners Up in the FA Amateur Cup losing 2-1 to Dulwich Hamlet at The Boleyn Ground
1937 - Runners Up in the FA Amateur Cup again to Dulwich Hamlet. This time 2-0 at The Boleyn Ground
1952 - Runners Up for a third time in the FA Amateur Cup. Walthamstow Avenue won a very local derby at Wembley Stadium 2-1. Leyton must of beat Eton Manor in this game then.
1975 - Leyton FC merged with Wingate FC to form Leyton-Wingate (Wingate had moved East after losing their ground when it was demolished to make way for the new M1 Motorway)
1992 - Wingate FC move back to North London to merge with Finchley FC to form Wingate and Finchley. Leyton-Wingate changed name back to Leyton FC
1995 - Leyton FC merge with Walthamstow Pennant to form Leyton-Pennant. (Walthamstow Pennant were formed as Pennant FC in 1964 as a Junior side subsequently changed their name to represent Walthamstow when Walthamstow Avenue became part of Redbridge Forest in 1988)
1997 - Leyton FC reformed and are founder members of the Spartan South Midlands League Division One.
2001 - Leyton FC win the Essex Senior League and are promoted to the Ryman League
2002 - A high court case rules that the reformed club have succesfully won the right to be recognised as an official continuation of the original club formed in 1868.
2003 - Leyton-Pennant re-named Waltham Forest FC
2005 - Leyton reach the play-offs in the Ryman Premier Division and narroly miss out on promotion to Conference South losing 2-1 to Eastleigh in the play-off final.
2008 - Leyton finish bottom of the Ryman Premier Division conceding a massive 123 goals in 42 matches. Just four league wins over the course of the season come at home to Horsham and Boreham Wood and away at Hastings United and Ashford Town (Middlesex). On the 15th December 2007 Hendon win 1-11 at Leyton.....part of a losing run in the league of 27 matches.
2011 - Leyton FC suspended from the Ryman League and withdraw from the competition.

Meanwhile, Eton Manor have been members of the Essex Senior League since 1975. Under Martin Chester they won the Essex Senior League Cup in 2008 and have been steadily improving after nearly two decades (1980s and 1990s) of finishing near the bottom of the table. They start their FA Vase campaign this Sunday when they play Essex Olympian League side Canning Town at Aveley's ground. 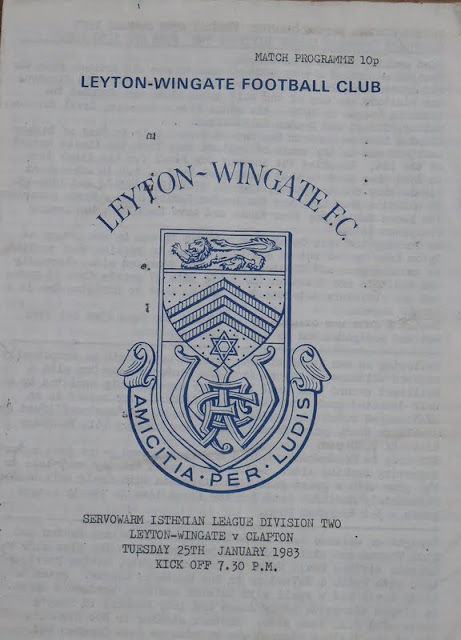 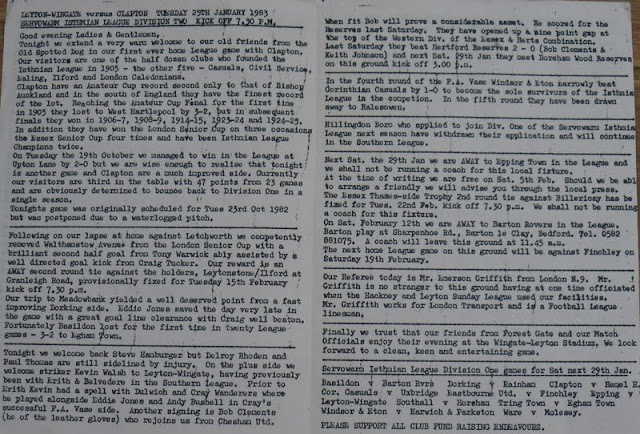 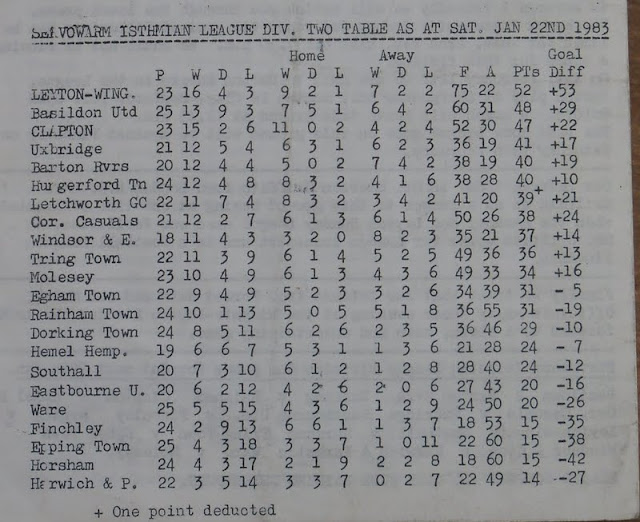 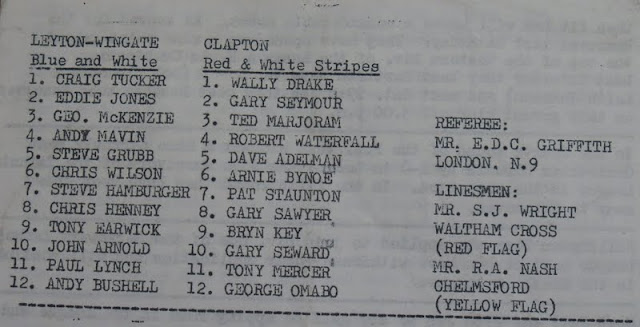 A bonus programme above for the East London derby between Leyton-Wingate and Clapton... both were flying high in the Isthmian (then sponsored by Servowarm) Divsion Two table. The table as of January 22nd shows Leyton-Wingate top followed by Basildon United and then Clapton.

The final table saw Clapton crowned champions followed by Windsor and Eton (who made use of their games in hand) and Barton Rovers. Leyton-Wingate just missed out on promotion, despite scoring an impressive 111 goals throughout the season. They finished in fourth place.

Click on the photos to read more closely.
at 11:25