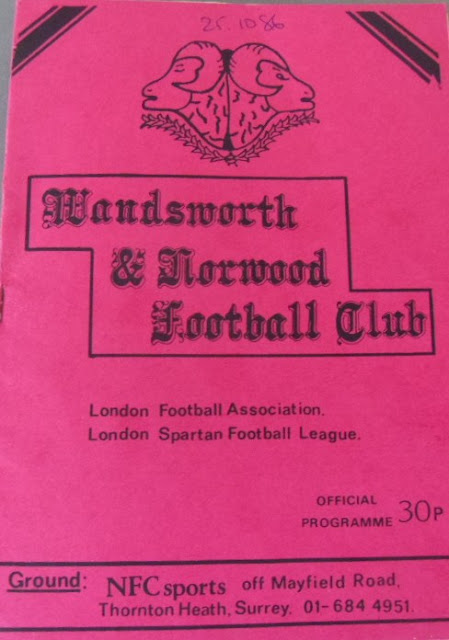 For the 1986/87 season the division featured Thamesmead, Walthamstow Trojans, Bromley Athletic and Royal Arsenal amongst others.

Wandsworth and Norwood FC had only just been established in the summer of 1986 following a merger of the two named clubs. They are nowadays known as Croydon Athletic having been renamed in 1990. Their visitors are a name not so well known in the non-league game with a brief stint in the Southern League between 1948 and 1950 their most famous achievement. The Spartan league had seen several clubs with the Town's name members with just Chingford, Town, Wanderers and United all competing and interlinked during the 70's 80's and 90's at various stages. Chingford competed between 1977 to 1983, Chingford Town from 1983 to 1987 & 1991 to 1994 & 1995 to 1997, Chingford United for just one season 1994 to 1995 and Chingford Wanderers 1991 to 1992. 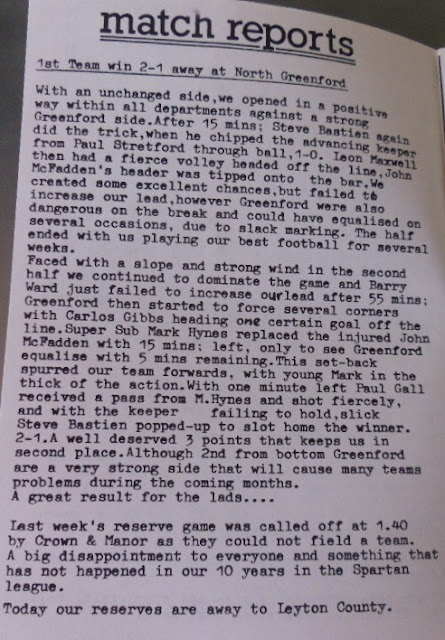 The London Spartan League at the time had a Premier Division which fed into the Isthmian League Division Two (North or South Division) meaning this Division One game was at Step 6 level football with the equivalent in today's pyramid being the Spartan South Midlands Division One.

The programme cost 30p and consists of 24 pages (12 are written material and 12 are adverts).W&N were riding high and 2nd in the table with Chingford in 7th place of 15 teams. The home side's only defeat had come away at BROB Barnet (2-1) with Chingford winning 4 and losing 3 of their games up to that date. 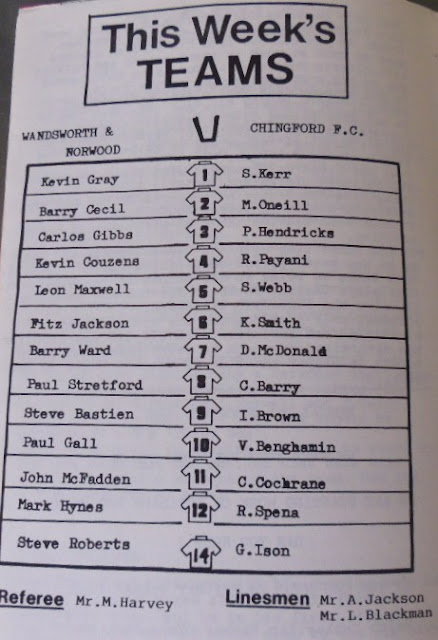 Their is a player profile for Paul Stretford who was known as 'Budgie' due to his constant banter on the pitch and had played for Tranmere Rovers and Stockport County along with Oswestry and Prescot Cables previously. He was playing in first season down South having moved from Manchester.

I am unaware of the score in this game but can tell you W&N finished 4th and Chingford Town 10th in the final league table placings. 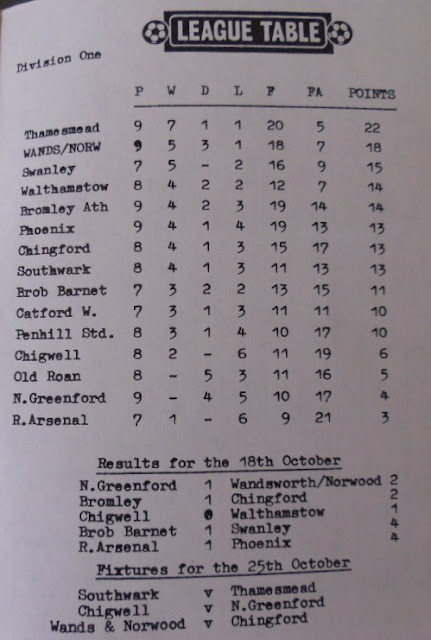 Where are they now??  Croydon Athletic finished 21st of 22 teams in the Ryman Premier Division last season and will play in the Ryman Division One (South) for the 2011/12 campaign. Chingford Town reformed in the Summer of 2008 and competed in the GA Roberts Enfield Alliance League, they were expelled in accordance with league rules for failing to fulfill sufficient fixtures mid-way through last season.
at 15:30