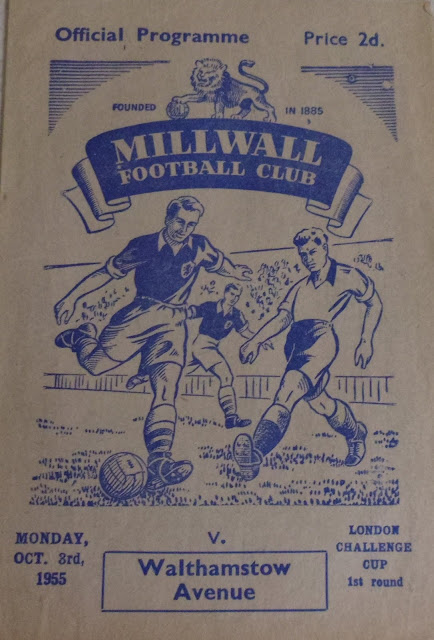 The cold end has already featured Walthamstow Avenue in this section with their game at Leytonstone in the very same year as this game where Millwall, then of Division Three (South), welcomed The Avenue to The Den. The programme describes the visitors as 'one of London's crack amateur clubs and doughty cup fighters' The VOICE OF MILLWALL goes on 'Injuries prevent us from fielding our recognised League XI and in consequence we are below strength. Avenue will be all out to lower our colours, and will contest every inch of ground'

There is also a section on 'new players' which states 'the management are out and about in the quest of players. Despite the low state of the kitty, offers have been made outside the range of "chicken feed". There have been disappointments-the search goes on' 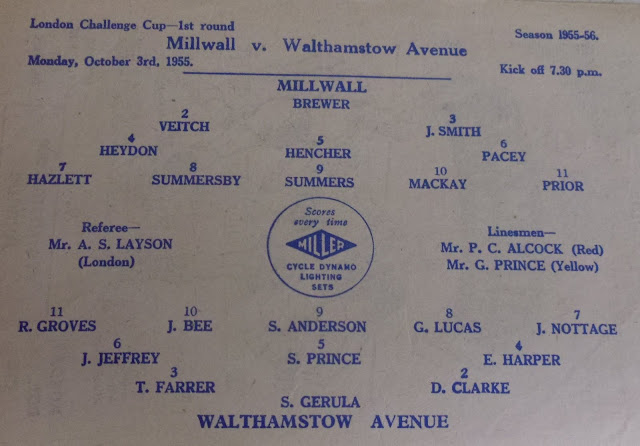 Listed in the Millwall line-up for the game in the programme are George Hazlett (who played over 100 games for The Lions in the 1950's). The Glasgow born outside right started his career with Celtic in 1946 and Centre forward Johnny Summers who scored 41 times in just 91 games for the Lions between 1954 and 1956 going on to play for Charlton Athletic in the First Division. Sadly, at the age of just 34 in 1962, Summers died after losing his battle with Cancer.

The London Challenge Cup was organised by the London FA and was first contested in 1908 until it was disbanded in 1974. Most of the full time professional clubs got their name on the trophy including Arsenal, Chelsea and Tottenham Hotpsur.

It was resurrected in 1990 and lasted for a further 10 years before being disbanded once more. It was mainly non-league clubs who contested for the trophy in the 90's with Leyton Orient the only league side to win in 1993 (when they beat Barnet 3-2).

The last final was contested between Uxbridge and Dulwich Hamlet in 2000 when after a 2-2 draw it was Uxbridge who won 25-24 (!!!!) on kicks from the penalty spot.

The cold end can't find a list of winners of the competition from 1908 through to 1974 anywhere on the web so can't confirm who won this game unfortunately.
at 11:27