Monday 1st March 1965 saw a Southern League Premier Division match played at Brooklands between eighth placed Romford and nineteenth placed Tonbridge. Brooklands was one of the best non-league grounds in the Country at the time and has been sadly missed by many people since the last game was played on it's hallowed turf in 1977. 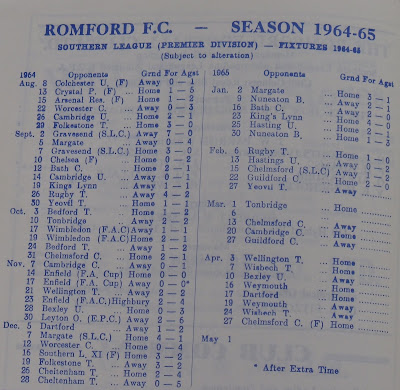 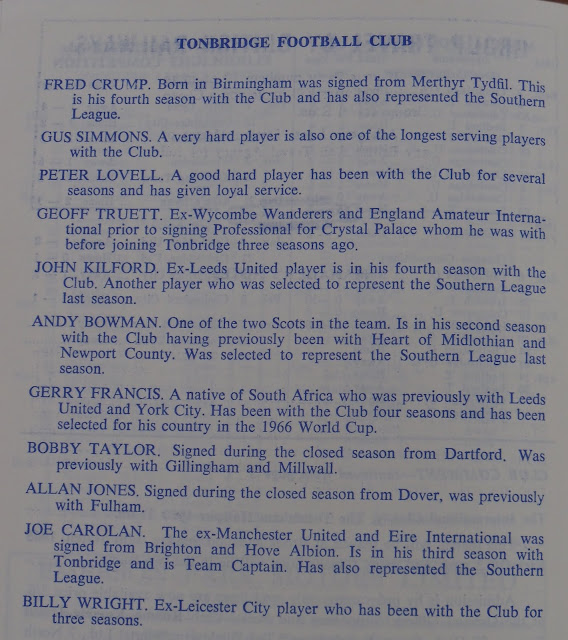 Members of the Southern League at the time included Yeovil Town, Cambridge United, Wellington Town and Wisbech Town along with Hereford United (who were crowned Division One champions for the 1964/65 season).

For veteran fans of Enfield FC and The Boro this was the season of the three FA Cup First Rond games between the two sides with two 0-0 draws at Brooklands and Southbury Road followed up by what can be considered as a giant killing by the E's in a 4-2 victory at Highbury. Rated as a giant killing as The Southern League was the top non-league division at the time and Enfield FC were members of the lesser rated Isthmian League. In fact The Boro had left the Isthmian League in 1959 to join the Southern League First Division where they achieved promotion to the Premier Division at the first time of asking. The E's went on to draw 4-4 with local rival's Barnet in the Second Round and then lose 0-3 at Underhill. 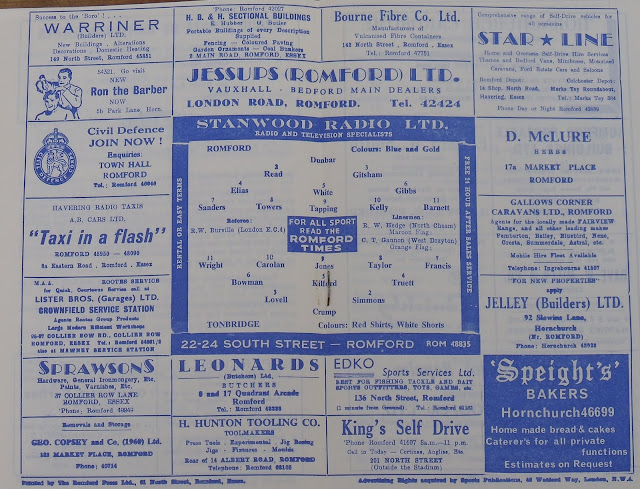 Boro were one of the biggest sides in the division at the time and Brooklands stadium rivaled many a football league sides grounds. During the swinging sixties the club had made attempts to join the elite of the football league being beaten in vote to join the Fourth Division by Oxford United in 1962 (who were Southern League Champions) and losing out in 1967 after they won the Southern League title. Maybe if Romford had pipped Oxford United to a league place in 1962 we may have seen the famous blue and gold shirts lifting the League Cup in 1986 against QPR instead of the The U's  ????
With huge debts building up the after the closure of of the inconic ground they played 1977/78 at borrowed grounds culminating in the club folding at the end of the season. Non-League fans now know that happily Romford were reformed in 1992 and with the recent news of a new stadium development at Westlands Playing Field in London Road football in the town looks to have a exciting future.

The game played in 1965 was against Tonbridge who had just been promoted to the Premier Division and they included a number of highly experienced players in their line up such as John Kilford (ex of Leeds United), Gerry Francis (who had played for Leeds United and York City after moving from his home country of South Africa) and Joe Carolan (who was an ex Republic Of Ireland international who had played for Manchester United 71 times before joining Brighton & HA and then Tonbridge).

The Boro included players such as Terry Tapping and Jim Towers (who was fourth in the Southern League top scoring charts at the time). They had won their last home game 2-0 against Guildford City in front of a crowd of 2,508 with messers Tapping and Towers getting the goals. With their average league home crowd for 2010/11 being 105 (highest 174 against Grays Athletic) i'm sure their attendances may increase when they eventually move back to their home borough from Aveley's Field Mill ground.

That 1964/65 season saw Romford finish in 14th place (of 22) and Tonbridge just below in 16th place. Weymouth who were top of the table at the time of this match were crowned Champions.

Only one of the winning programme numbers form the Guildford City game was claimed with seven unclaimed. The cold end wonders if number "1229" for the Tonbridge game was a winner and if it still can be claimed!!!!

credit to football club history database - this website shows the history of mostly every football club to have played in England.
at 10:39