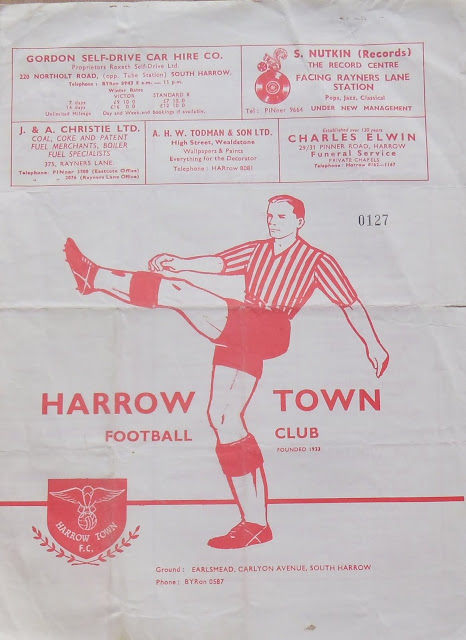 On Saturday 23rd September 1961 Harrow Town, then of the Delphian League, were 'pleased to have a rare visit from one of the strongest Amateur teams in the country at the present time'.

Harrow Town became the club we now know as Harrow Borough in 1967 having played at their ground, Earlsmead, since they were formed as Roxonian FC in the 1930's.

Glancing at the fixtures Harrow had played up until the game they had had a real mixed bag of fortunes with 3-6. 0-1, 1-3 and 1-4 defeats along with a 4-3 win against Stevenage and a 7-1 victory over Bishops Stortford (who at the time were also members of the Delphian League) in the previous round of the world's most famous cup competition.

In the previous season's Cup competition Town had got through to the 4th Qualifying Round by beating Wealdstone, Hertford Town, Bishops Stortford (by a margin of 8-4, they must of like playing them at the time) and eventually lost out to Maidenhead United by a scoreline of 2-3 at home. That had been their best season so far in their history at the time. Harrow Borough qualified for the 1st Round Proper for the first time in 1983/84 where they beat Yeovil Town 1-0 before bowing out to Newport County (then of Division Three) 1-3 at home. The E's had played Newport in the Cup the previous season losing 4-2 in Wales after a 0-0 draw at Southbury Road in the First Round Proper.

The programme states 'when we realise that Enfield crushed the powerful Hertford side 8-1 in the previous round, it is, perhaps, natural that we are a little apprehensive (the understatement of the year?)' and they were proved right at The E's, then members of the Athenian League, won 0-4.

In the next round local rivals and fellow Athenian Leauge title challengers at the time, Barnet, visited Southbury Road and won 2-4. They then beat Hitchin Town 3-2 at Underhill before losing to Southern League Weymouth 1-0 away from home in the First Round Proper.  The Terras got through to the Fourth Round that season and made a big trip to Deepdale to play Division Two giants Preston North End who ran out 2-0 winners. 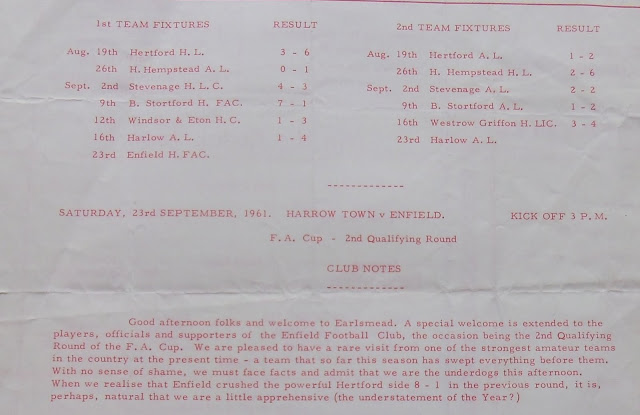 The E's got some revenge back on their rivals by lifting the Championship by a margin of 3 points to The Bees in the runners-up position.

Harrow Town had an awful season finishing 13th of 14 clubs winning only 3 of 26 leagues games. Bishop's Stortford who they had beaten so convincingly in the Cup went on to finish in 3rd place in the Delphian League. The Champions that season where Hertford Town. The league ceased to be after the season of 1962/63 with most clubs joining the then stronger Athenian League to form it's new Second Division.

Harrow's reserve side had just played a side called 'Westrow Griffon' at home in the London Intermediate Cup. They had lost the game 3-4 to the Essex Intermediate League side after leading 2-0. I can't find any information regarding 'Westrow Griffon' so they remain a bit of a mystery. If you have any knowledge of them please contact the cold end. 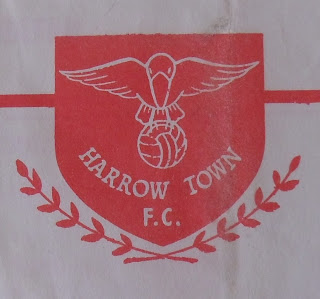