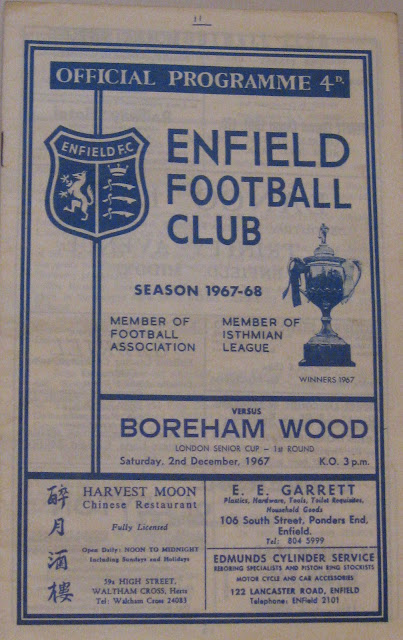 With the eagerly anticipated FA Cup game where Enfield Town are underdogs visiting Boreham Wood now only a day away - the roles were reversed 43 years ago when Enfield FC entertained Boreham Wood in the first round of the London Senior Cup. Enfield FC were then holders of the Amateur Cup and the competition in question and also sitting top of the Isthmian League. The visitors are described in the programme as 'a progressive club playing in Division II of the Athenian League' and had qualified for the first round of the LSC for the first time. 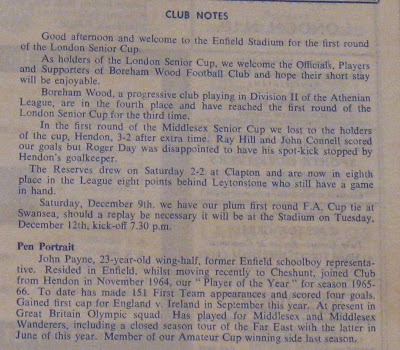 This game took place just one week prior to the E's trip to football league Swansea in the FA Cup and the supporters club notes section encourages fans to make the journey to South Wales. This Swansea game originally scheduled for the 9th December 1967 eventually took place on the 18th December with the E's losing 2-0.

The programme also notes 'it was very strange to see our lads in the unfamiliar red cup tie strip, and it is surprising how different a team is in appearance when you see them in this change of colours' which relates to the previous week's Middesex Cup tie against Hendon at Southbury Road which had been lost 2-3. 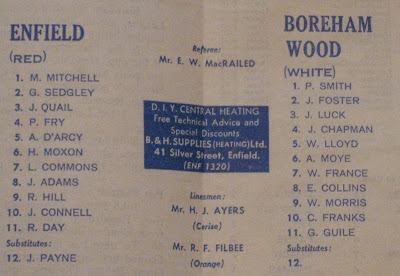 Boreham Wood caused somewhat of a surprise by forcing a creditable draw with the result being 2-2 in this game. The replay played on Thursday 16th December 1967 was won by the E's 1-4 just two days prior to their trip to South Wales.

The London Senior Cup was in those days was held in high esteem with all the Capital's non-league giants competing to win the trophy.

The E's who were holders in 1967 having beaten Walthamstow Avenue in the final in the previous season went on to reach the final once more by beating Sutton United (H 3-1), Hayes (H 2-0) and Avenue in the semi-final (A 1-3). In the Semi-Final Avenue did take a 1-0 lead but goals from Quail and Connell (2) put the E's through.  Dagenham won the final 1-0 and lifted the trophy. 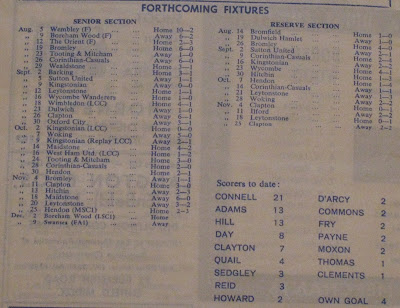 The LSC is currently held by the Metropolitan Police of the Ryman Division One (South) who famously beat AFC Wimbledon on 4-3 on penalty kicks after an amazing 4-4 draw in the final played at Harrow Borough last season. Recent winners include Waltham Abbey (1999), Wingate and Finchley (1995) and a team called Tottenham Omada in 1996 who beat Kingsbury Town 2-1 in the final. The cold end can't find many details about Omada but can confirm they did play in the London Spartan League from 1993 to 1997. 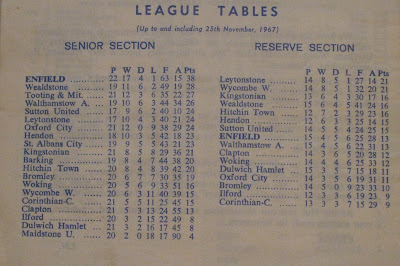 The London Senior Cup (sponsored by Coventry Scaffolding) for 2010/11 is now underway with all the first round matches being played this midweek. Here is the full draw which includes several Ryman North sides -

There could be an interesting game in round three as if Combined Counties league Croydon beat Erith and Belvedere in Round Two they will travel to face a local derby against Ryman Premier Croydon Athletic in Round Three.

This historic and famous competition first won by Upton Park in 1883 is still going strong this season.