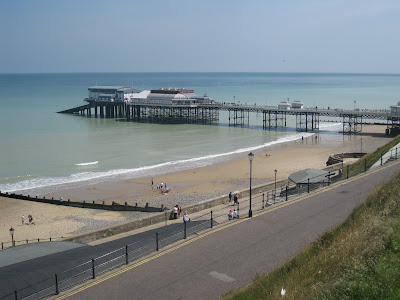 Above - The pier and beach at Cromer

Everyone loves the seaside and the one thing which makes a good old fashioned British resort has to be a pier. With Blackpool gracing the FA Premier League in the forthcoming season and possibly beyond huge numbers of supporters will be planning to enjoy a weekend away to see the sights on The Golden Mile. One things for sure, they'll be many visitors waking up nursing hangovers in the Shadow of the Tower over the coming campaign.

All football fans know about the numerous seaside town's that have football league sides such as Portsmouth whose Fratton Park ground is a stone's throw from the sea front at Southsea.
The cold end is a dedicated follower of non-league football so now presents 'Clubs with Piers' which will be a guide to the seaside resorts with piers and the lesser known football clubs amongst the attractions. Part One is the delightful town of Cromer located on the beautiful North Norfolk coast around 130 miles away from Enfield.

Cromer Town were formed in 1884 which makes them one of Norfolk's oldest football clubs. The Crabs, as they are nicknamed after the famous shellfish which are caught off the coast in the area, play in the Premier Division of the Anglian Combination which sits at Step 7 of the Non-League pyramid.

The club have played at Cabbell Park since 1922 which is named after Evelyn Bond-Cabbell, The local lady of the Manor bequeathed the lease to the ground to the town as a memorial to the brave people of the town who lost their lives in the First World War. 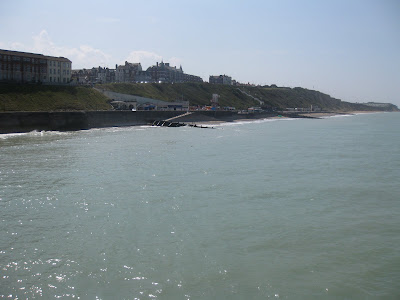 Above - The seafront at Cromer

The Crabs may have claim to the most bizarre reason for vacating their home ground ever. Most non-league sides relocate or move out of their stadiums to clear debts and move to better well equipped modern stadiums with flats (or as estate agents call them - luxury apartments) being built over them.

The reason Cabbell Park may have to be vacated in 2012 is slightly more peculiar than the usual information given by clubs across the country, it's due to the death of Norway's King Olav V on the 17th January 1991.

When Cabbell Park was given in 1922 it included an obscure clause that the lease would expire 21 years after the death of Queen Victoria's last surviving grandchild.

Discussions have reportedly taken place between club officials and Bond-Cabbel's great-grandson Benjamin Cabbell-Manners with the club expressing an interest in staying at the place they've called home for over 85 years.

The Crabs finished 2nd the Anglian Combination Premier Division last season being pipped to the title by three points by Blofield United. The division is also home to Cromer's local rivals Sheringham. The Shannocks play just along the coast at Weybourne Road.
Sheringham is another wonderful coastal town but doesn't have a pier like Cromer. They lost their Senior status in 1985, their ground in 1988 and thus nearly disappeared from the footballing map but thanks to a small dedicated band of people secured a new ground in the town in 1996. After three successive promotions in the early 2000's they returned the Premier Division to renew their rivalry with The Crabs.

The beach and pier in Cromer is a very pleasant place to spend a Sunny Summer's day. The cold end can recommend the Pavilion theatre bar which is a great place to enjoy a drink. The Pavilion theatre is open all year round and plays host to Chas and his Band, Cannon and Ball and The Real Thing amongst others in the forthcoming months.

Cromer Town will play at Cabbell Park for the 2010/11 season. The question of will it be one of the last at their current home will be known as the story develops.

PYRAMID PASSION WEBSITE WITH PICTURES OF CABBELL PARK THEN AND NOW