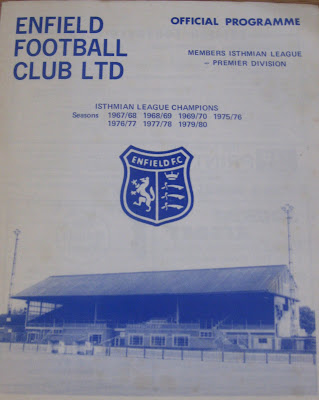 On Tuesday 4th November 1980 the E's welcomed Hitchin Town to Southbury Road for what was then a Berger Isthmian Premier Division game. Both team's had just played important FA Cup 4th Qualifying round games with The Canaries going down 0-1 to Sutton Coldfield Town at Top Field with the E's winning comfortably 5-0 at home to Epsom and Ewell. Epsom (then of Isthmian Division One) had beaten Eastbourne Town, Margate and Ashford Town only to be beaten at Southbury Road. The game was the start of the E's famous run to the 4th round proper and the game versus Barnsley at White Hart Lane. 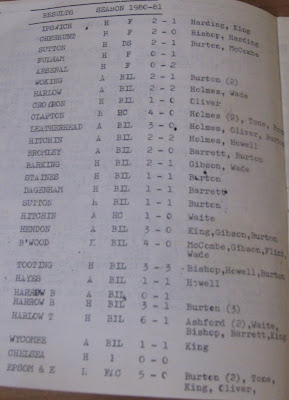 The E's opponents in Round One were to be another Isthmian Division One side in Wembley who had a tremendous run in the competition that season beating Leytonstone Ilford, Lethchworth GC (after a replay), Chelmsford City and Dover (after a replay).

The E's were riding high top of the division with Hitchin Town down in 17th place for this game. The clubs had met twice before in the season even with it being only the beginning of November. It was a 2-2 draw in a league encounter at Top Field with Lee Holmes and Ron Howell scoring for the E's. There had also been a journey to Hertfordshire in the Hitachi Cup where a 0-1 win was gained via Dave Waite's solitary goal. 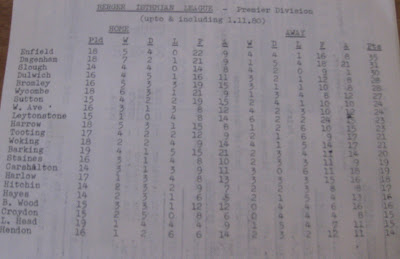 The E's had just gained their second piece of silverware for the season when they had lifted the Berger Isthmian League Five-A-Side tournament at Wembley Arena. The Squad was Pitcher, Barrett, Howell, Tone, King and Ashford. The programme details the route to the final the team had on the night being a 2-0 win against Walthamstow Avenue (Steve King scoring both goals), Dagenham 4-2 in the quarter final (Barrett, Howell, King and Tone), Woking 1-0 in the semi final (courtesy of Howell) and then in the final defeating Harrow Borough 2-0 with goals from King and John Tone. Tone had just made his 350th appearance for the club in the cup game versus Epsom. 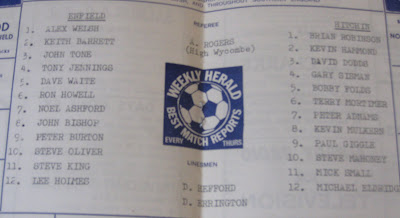 The league table as stated shows the E's on top as of 1.11.80 followed by Dagenham, Slough and Dulwich Hamlet. The Rebel's eventually pipped the E's to the title by two points. Hendon, bottom of the table in November with only 3 wins eventually made it to sixth place in the final table with Woking then in mid-table finishing bottom of the table on 37 points (3 deducted).
The 1980/81 season was the last the E's were to spend in the Isthmian League for a decade with them as we all know going on to great success in the Alliance Premier League/Gola League in the 1980's.
The programme cost just 10p on the night and shows a marvellous picture of the old main stand with the white picket fence and old floodlights which were replaced with the bigger 'E' floodlights in the 1980's.
Veteran fan's of Enfield Town and Enfield 1893 FC may indeed remember this game and the five-a-side victory at Wembley Arena? 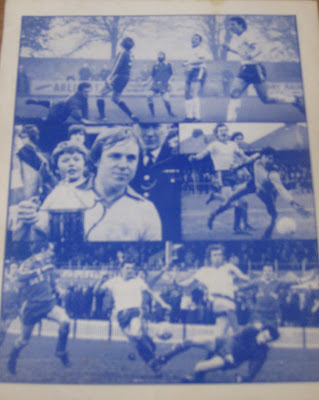