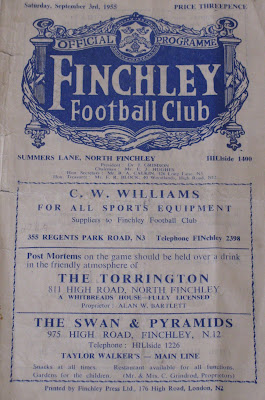 On Saturday 3rd September 1955 Enfield FC made the short journey over to Summers Lane to face Finchley FC in the Athenian League. The programme issued cost Three Pence and was eight pages in total. On the front page their are adverts for two local public houses. The Torrington (now closed) states "Post mortems on the game should be held over a drink in the friendly atmosphere" and The Swan and Pyramids (happily still a licenced premises, now called 'The Safari Bar Indian Restaurant') welcomes customers to their restaurant available for all functions. 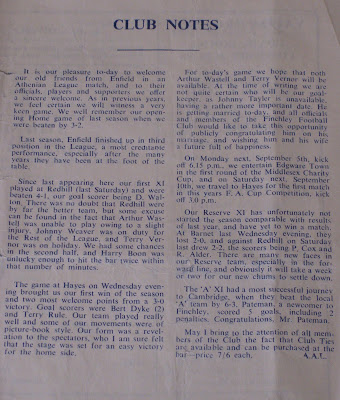 The club notes welcome "our old friends from Enfield" and remembers the opening home game against the E's in the previous season when an away 3-2 win was recorded. The notes go on to state Enfield had a 'creditable performance' is finishing in the third place in the league in the previous season after many years at the foot of the table. The game looks like it was won by Finchley 1-0 as whoever brought the programme recorded this fact in pen on the team-sheet. 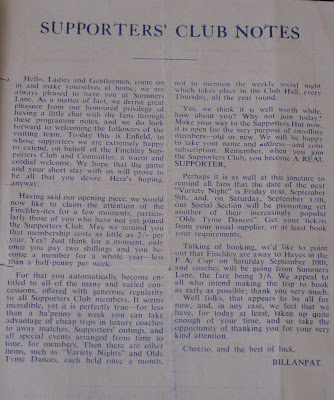 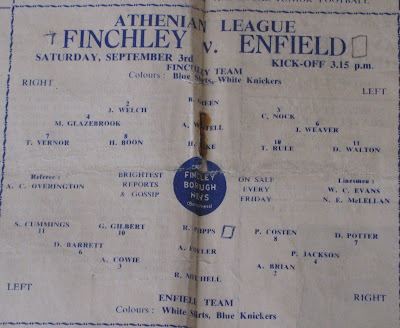 Click on the pictures to enlarge image which should allow you to read this 50 year old + programme. A real piece of history.
at 13:48