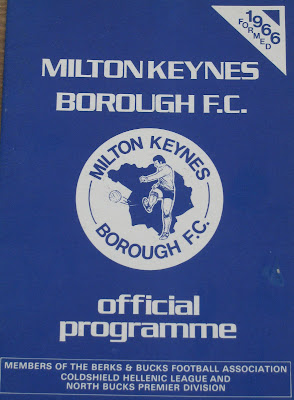 Mention the City of Milton Keynes to most football fans and the stock answer you receive will mention when Wimbledon FC were taken from SW9 to form the MK Dons to whom many supporters refer to as Franchise FC.

Prior to the highly controversial formation of the DONS and the building of StadiumMK, the new town in Buckinghamshire had numerous teams in various divisions of non-league football which appears to be quite a tangled complex web of team's folding, records being expunged and team's reforming a number of years after disappearing off the football radar.

The biggest of these teams was Milton Keynes City (effectively formed in 1974 after changing names from the original Bletchley Town club who were formed in 1956). City represented the Town in the Southern League during the 1970s and 1980s and are not to be confused with the Milton Keynes City club (formed in 1998 after 'Mercedes-Benz' changed names). The original club plugged away in the Southern League until 1984 when they unfortunately folded with their record expunged from the league records.

City never finished higher than 15th place in a league whose membership fluctuated between 20 and 22 clubs. The City club formed in 1998 played in the South Midlands League eventually folding in 2003, they brief existence was highlighted with a run to the 4th round of the FA Vase in 01/02 when they were beaten by seasoned Vase competitors Whitley Bay.

In this classic programme it was a Milton Keynes derby between then Hellenic League Borough and their 'giant' neighbours City. Borough were originally formed as Belsize in 1966 and changed names to MK Borough in 1975 and were United Counties League champions in 1979 and played on in the South Midlands League until 1993 when the club folded.

There is no date on this programme but I assume this 1983/84 Bucks and Berks Senior Cup Preliminary Round game took place some time in September as it mentions Borough's forthcoming trip to Baldock in the FA Vase. The winners had a home tie with Windsor and Eton to look forward to in the first round on the 22nd October 1983. 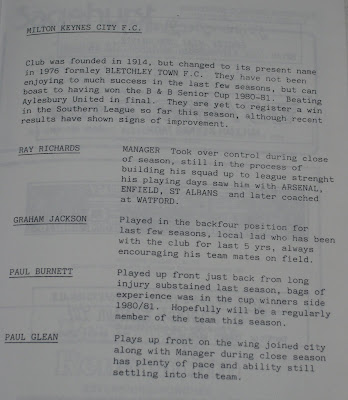 I am unaware of the result of this match but the final of the competition that season was won by Buckingham Town who beat Abingdon United 3-1. 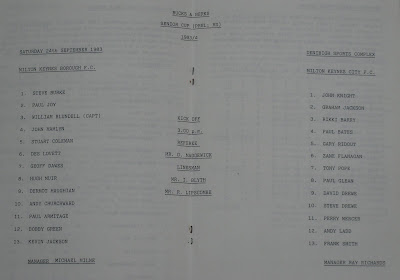 There are a number of clubs who have also and still represent the City of Milton Keynes as follows:

From the ashes of MK Borough's demise a new club called simply 'Milton Keynes' was formed and joined the South Midlands League. In 1999 is when it gets confusing as the club changed it's named to Bletchley Town, I assume to be more representative of the area where they played. The new Bletchley Town club folded during the 99/00 season.

The cold end can't find much information on this club who appeared briefly in the 1993 in the South Midlands League Division One.

United joined the South Midlands League in 1984 and changed names to Town in 1987 only to leave the league after one season.

The club's senior team currently play's in the Spartan South Midlands League Divsion Two (step 7) and are currently 5th in the league and have played in the league since 2008.

Wolverton Town were formed in 1887 and played in the Isthmian League in the early 1980's changing names to Wolverton Town MK in 1988 and then MK Wovlerton Town (aka Milton Keynes Wolves) in 1989 and then just plain and simple Wolverton in 1990. The club folded in 1992. Up until 1992 and the club's demise the stand at Wolverton Park was beleived to be the oldest football stand still used in the UK.

The City now only has MK DONS in the football league and MK WANDERERS as stated above who represent the "MILTON KEYNES" name in senior football.

The Spartan South Midland League currently has member clubs from places around the MK area such as New Bradwell St Peter, Stony Stratford Town, Old Bradwell United, Bletchley Town and the aforementioned MK Wanderers club. The new Bletchley Town club were formed in 2005 and are known as The Moles. The local derby between Town and Wanderers played on the 31st October 2009 attracted a crowd of 27 people. Bletchley's biggest crowd of the season came on the 15th August when a large travelling support from Berkhamsted swelled the attendance to 80. MK Wanderers top crowd of the season is currently 51, which came on the August bank holiday game with Mursley United.

The two club's play each other on Saturday 10th April with Wanderers hosting Bletchley Town in a MK local derby.