ISTHMIAN PROGRAMMES OF THE PAST (PART 2) 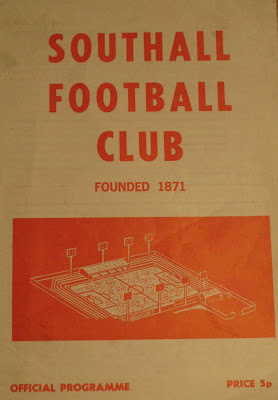 Southall & Ealing Borough (as the club were called from 1975 through to 1980) were a Isthmian side when they entertained East Ham United in this London Senior Cup first round replay in 1976. Southall's Western Road ground has long since gone and the club now ply their trade in the Middlesex County League after financial problems in the 1990's. 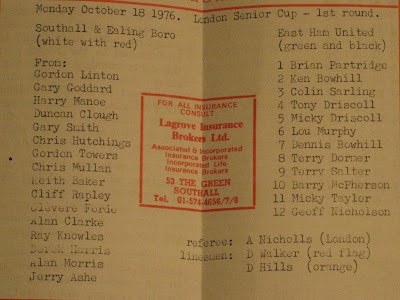 Two facts about Southall are that in 1977 they sold Alan Devonshire to West Ham United for £5,000 which was then a record for a player leaving a Isthmian League club and future England International Sir Les Ferdinand played for them in 1986 when they reached the FA Vase final which they lost to Halesowen Town 3-0.

The London Senior Cup was much more of a competition to win in these days which older Enfield FC fans will vouch for as the club won the trophy in 72,73 and 76.

The Hammers, as East Ham United were known were playing in the London Spartan League at the time and had put out Southall in the previous season's competition which was classed as a "shock result". The first game was drawn 2-2 at East Ham. 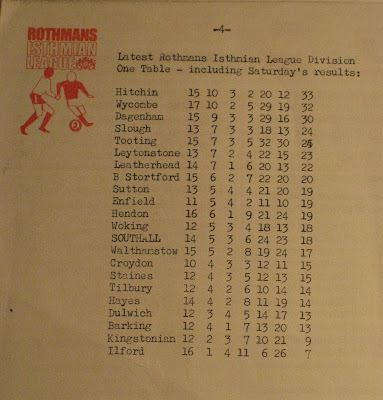 The programme reports that Capital Radio DJ Roger Scott will be in charge of the usual Friday night disco in the clubhouse and shows Southall in Mid-table in between Woking and Walthamstow Avenue. Two clubs from this division at the time now play league football in Wycombe Wanderers and Dagenham (albeit with Redbridge).

Southall also featured a 19 year old Chris Hutchings (unconfirmed but i think it's him??) who went on to play for Harrow Borough before joining Chelsea, Brighton & HA, Huddersfield Town, Walsall and Rotherham United. Then managing Bradford City, Wigan Athletic and now Walsall.

The cold end doesn't know what the score was in this match but can tell you that the 1976/77 competition was won by Wimbledon who beat Staines Town 1-0 in a replay after a 0-0 draw.

This season's London Senior Cup is near-enough at the quarter final stage with the following matches due to be played:

The final is due to the played at Harrow Borough FC on Wednesday 28th April 2010. The trophy is currently held by Ryman Premier Hendon FC.
at 19:49