ISTHMIAN PROGRAMMES OF THE PAST (PART 1) 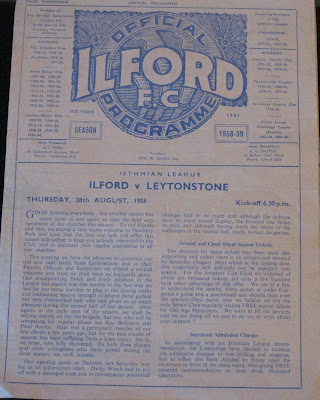 ILFORD V LEYTONSTONE
THURSDAY 28th AUGUST 1958
This programme really is a classic as it's over half a century old. The 1950's were of course a time of no substitutions with none of your modern day coming off with a slight leg strain ..............if you had a compound leg fracture you jolly well played on and done your best!!
Snow also never seemed to stop games going ahead...Just break out the orange ball and play on. I think players back then would laugh at some of the professional games being called off for "Health and Safety reasons" just in case a fan slips over 1/2 a mile away from the ground. 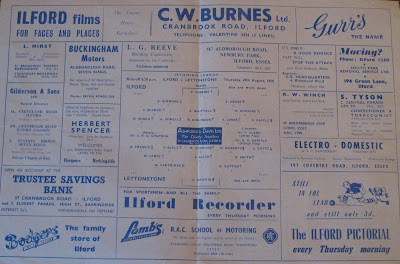 This was a clash of two teams of that dominated the East London area along with Walthamstow Avenue back in the Halcyon days of Amateur football. You only have to look at Ilford's fixture list for the previous season printed in this programme for proof that they didn't mess around with postponements and they certainly didn't moan about too much football as Ilford had games on Christmas Day and Boxing Day in playing two local derbies against Romford FC.
The match kicked off at 6.30pm as floodlights were yet to be installed at Ilford's old Lynn Road ground. The programme reports of increased admission charges to one shilling and six pence. Whoever watched the game with this programme looks as though he marked the player's performances out of 10, H. Dodkins of Ilford was given a 9 so can be given Man of the Match. 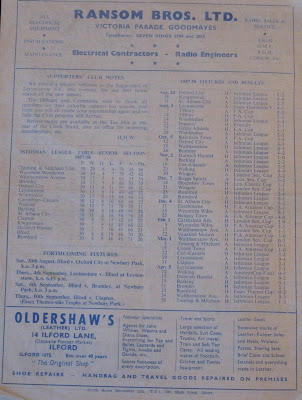 Click on the pictures to read the programme and see close up a piece of history from over 50 years ago.
Ilford and Leytonstone themselves merged in the late 1970's and went on to merge with Walthamstow Avenue and become Redbridge Forest and then Dagenham & Redbridge. Ilford, As we know re-formed in 1987 and now play in the Ryman North Division.
What a shame that three great Non-League grounds in Ilford's Lynn Road, Leytonstone's Granleigh Road and Avenue's Green Pond Road are now no more. The only thing I can think of that remains to remind us of these once great venues is Dellow Close off Lynn Road in Ilford which is named after a legendary player of the 1930's.
Talking of Walthamstow Avenue the cold end highly recommends The history of Walthamstow Avenue website which is brilliantly written and contains loads of information and history about the former Amateur giant.
at 19:33