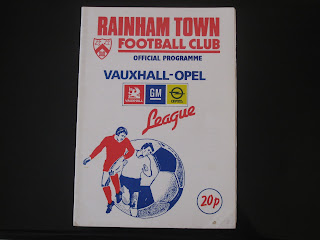 Deri Park makes up part of the depressing list of grounds in the London area to disappear in the last twenty or so years. As in so many cases, with the ground went the club and it was no different in the case of Rainham Town FC.

The club were formed in 1945 and moved to Deri Park in 1948 after playing their initial matches at Rainham Working Men's Club Ground. The first match at Deri Park was played against near neighbours Woodford Town who were beaten 4-1. 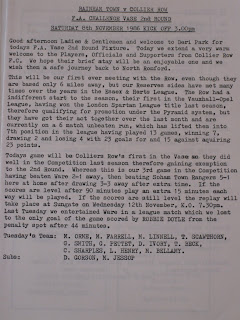 During the 50's and 60's the club switched between the Delphian League, Athenian League and Metropolitan League. The Metropolitan League in the early 60's had the third teams of most of the top London professional sides. In 1963 Rainham won the shield for the highest placed Amateur side.

From 1964 the club played in the Athenian League Division Two and by the early seventies had sank to the depths of having to apply for re-election. Happier times were to follow when the club finished runners up to Alton Town and promotion to Divsion One was achieved.

The club installed floodlights at this time and on 23rd October 1974 Orient visited Deri Park in a match to mark the official 'switching on', Rainham lost 4-1.

From 1977/78 the club joined the Isthmian League where they were to stay until they folded and went out of business. This season also marked there best run in the FA VASE where they reached the 5th Round. Victories versus Canvey Island, Tiptree United, Crown &; Manor, Egham Town and Diss Town set up an away tie with Almondsbury Greenway where they lost 2-1. Almondsbury went on the beat Burnham in the QF (after a 2nd match as the original tie at Almondsbury which they won 2-0 was ordered to be replayed as the pitch was ruled too small) before loosing out to Blue Star in the SF 4-2 on agg. Greenway were a force to reckoned with in the Vase at that time as in 76/77 they reached the 5th round, 77/78 semi final, 78/79 finalists. 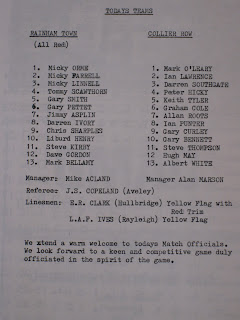 Rainham's best performance in the FA Cup came when they reached the 3QR in 1958 beaing Aveley, Brentwood & Warley and Ilford before loosing out to Chelmsford City. The following season victories versus Leytonstone and Brentwood & Warley moved them into the 3rd QR again where they lost to Woodford Town. In 1993 the club played their last FA Cup fixture versus local rivals Purfleet being soundly beaten 5-1. Also in 1993 the last Vase fixture was played versus Hanwell Town resulting in a 5-2 defeat.

Rainham lost versus Colchester United AET in the semi final of the Essex Senior Cup in 1981/82 and in 82/83 they lost 4-1 to Southend United in the 2nd round of the ESC. They played the Shrimpers again that season in the Essex Thames Side Trophy, two late goals by the football league side broke Rainham's resistance with the final result being 3-2 to the Roots Hall team.

1993/94 was the last season played for Rainham Town in the Second Divsion of the Isthmian League where they finished bottom with a playing record of 4 wins, 2 draws and 36 losses out of 42 games. Shipping 116 goals and scoring only 24. The season was an immense struggle with the club leading a nomadic existance after leaving Deri Park playing firstly at Purfleet and then at Aveley's Mill Field. With no prospect of moving back to their home town the club sadly folded. 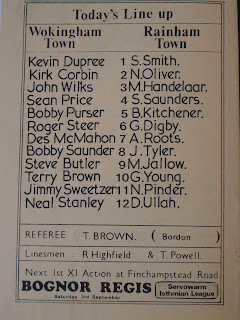 Vistors to Deri Park will inform you of a rickety old main stand with a leaky roof that moved if their was a gust of wind. This is what made characteristic old grounds like this one on Wennington Road so brilliant to visit. A far cry from the modern all seated stadia of the FA Premier League but all the more endering with it. 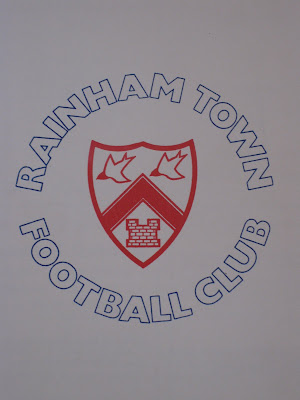 CLICK ON THE PHOTOS TO ENLARGE IN ORDER TO READ THE TEXT
source http://fchd.info/
at 08:06